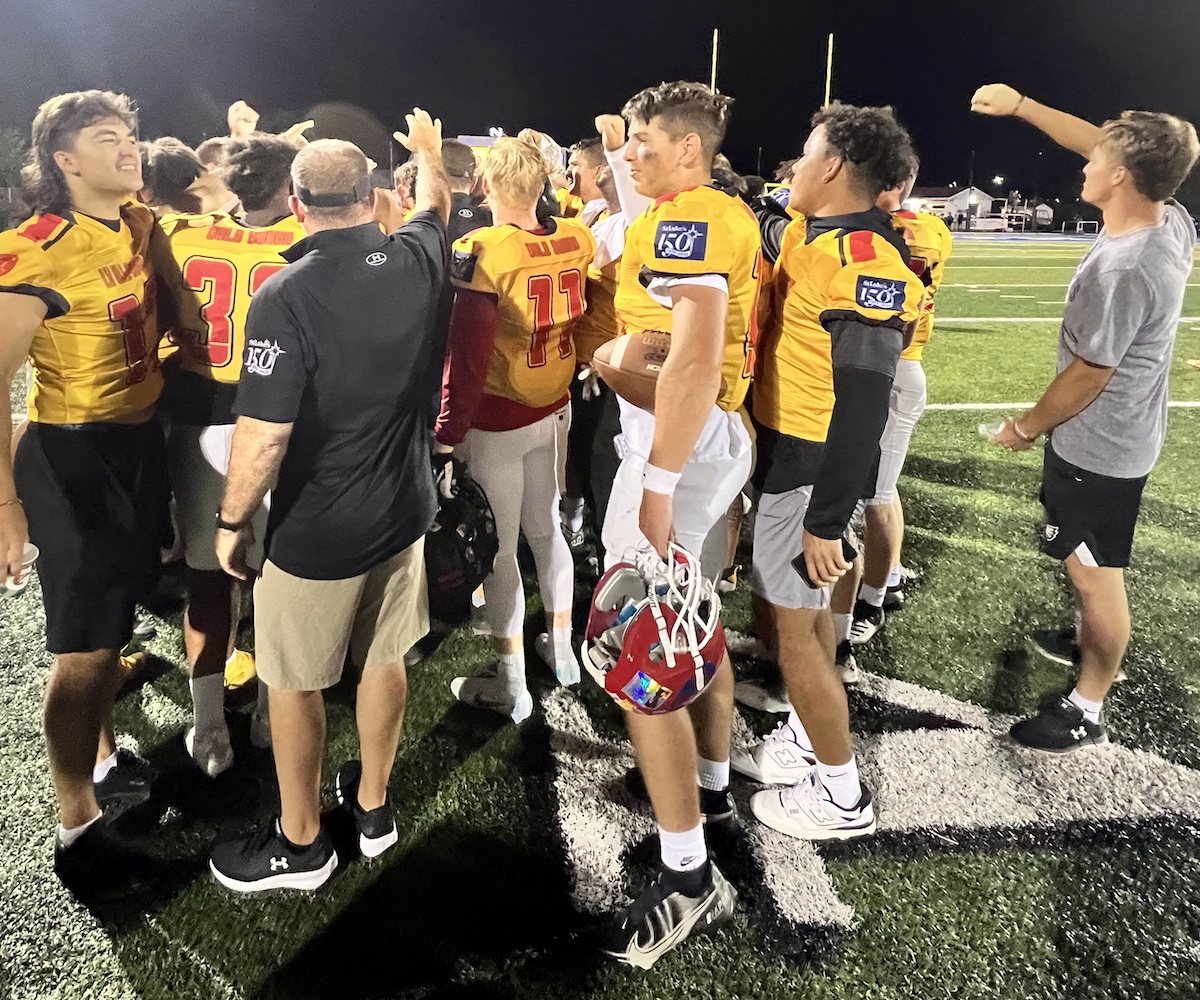 The Gold Team was driving when East Stroudsburg South’s Ron Blake recovered a fumble. The Red Team got to the one yard line and faced a fourth down and goal. Blake was stopped and the Gold Team took over on downs. The game was scoreless after one quarter.

The first score of the game was a 27-yard field goal by Easton Area’s Matthew Clark. With 8:05 remaining in the first half, the Gold Team led 3-0.

The Gold Team went 87 yards for a scoring drive. During the drive Gillen had catches of 43 and 34 yards. What looked like an interception by Misera turned into an amazing catch by Gillen as he was falling down at the one yard line.

Easton Area’s Marcus Williams finished off the drive scoring from one-yard out with 13 seconds left in the first half. The Gold Team went into halftime leading 10-0.

Easton Area’s Matthew Clark punted the ball and bounced back and hit Lucas Heydt in the back. It was recovered by Nazareth Area’s Broc Bender. The Gold Team took over on their 43.

Three plays later, Transue hit a wide open Gillen down the middle for a 35-yard touchdown pass with 9:09 left in the third quarter. The Gold Team extended their lead to 17-0.

Red Team cuts into the lead

It was the defense that got the first score of the game for the Red Team. Big pressure by the defense on Stem resulted in a pass right at Pleasant Valley’s John Brennan. He intercepted the ball and took it in from 14 yards out. Misera’s kick was good and it was 17-7 Gold Team with 3:54 left in the third quarter.

Misera had his second interception of the night and the Red Team was on the move with 8:30 left in the game. On fourth down and five, Dylan Smoyer found his teammate Trevor Amorim for a 24-yard pass down to the five. Northern Lehigh’s Matt Frame finished off the drive, powering in from five yards out to cut the lead at 17-14 with 7:03 left in the game.

The Red Team’s first lead of the night

Parkland’s Nico Medlar intercepted a Stem pass and returned it 30 yards for the score. They now led 21-17 with 5:50 left in the game.

The Gold Team answers back

It only took only two plays. The combination of Transue to Gillen struck again! Gillen avoided the hit and tip toed down the sidelines for a 69-yard touchdown pass. This put the Gold Team back up 24-21 with 4:43 remaining.

The defensive play of the game came with 1:19 remaining in the game. Easton Area’s Kyle Evancho went up high and somehow knocked the ball away from a potential go ahead touchdown pass by the Red Team.

The Red Team had one more play from the 22 facing a fourth down and 11. The pass was a little too long and the Gold Team took over on downs.

The Gold Team took the final snap with time winding down. It was the final play for these seniors.