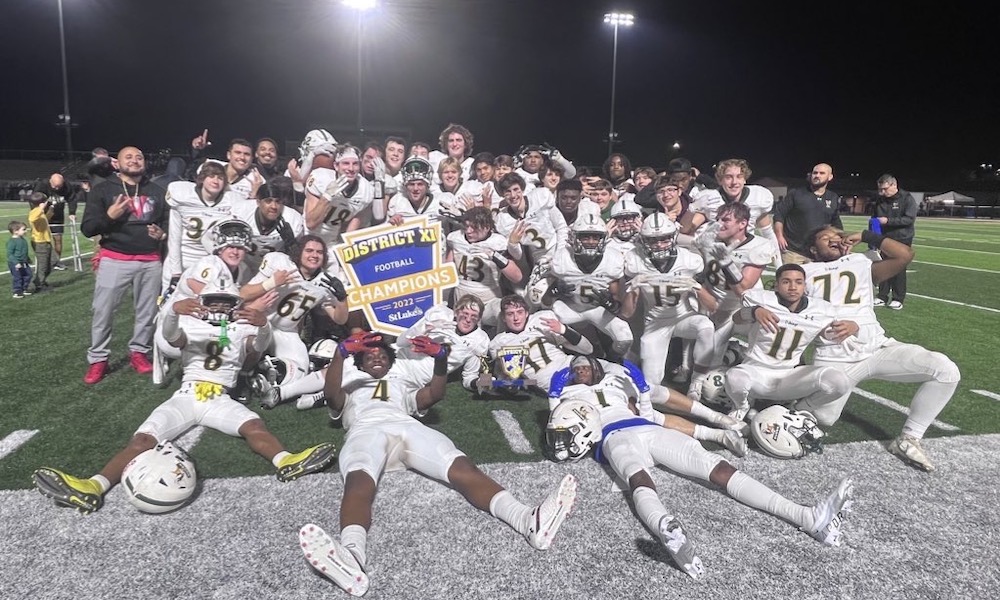 WHITEHALL – Allentown Central Catholic’s senior running back Caiden Shaffer scored a late touchdown on fourth-and-one to seal a 14-3 win over Bethlehem Catholic. It was the Vikings’ third straight District 11 4A title.

“This one is really special. We had some adversity,” said Head Football Coach Tim McGorry. “This year we came out of the gate playing well and had some injuries in the middle of the season. To see these guys overcome it is special.”

With the win, the Vikings move on to play in the first round of the state playoffs. Allentown Central Catholic will face District Four champs, Jersey Shore Friday night. Last season, Jersey Shore defeated the Vikings 20-7.

“We played them a year ago and we went against them this summer in a 7-on-7,” said McGorry. “They are a really good coach football team and they have an unbelievable culture that their coach has created. They are averaging over 55 points a game and it’s going to be a tremendous challenge. But we feel we left some things on the field a year ago and we’ve got to try and play up to their level and we will get to work on that tomorrow.”

The Golden Hawks struck first. They capped off a 71-yard, seven-play drive when Jeremy Fyrer’s 26-yard field goal went through the uprights. Bethlehem Catholic led 3-0 with 8:54 left in the first quarter.

The Golden Hawks’ defense came up with a big play with 4:21 left in the first quarter. Robert Williams recovered the Vikings’ fumble and they took over on their 18.

But Central Catholic’s defense held and the Golden Hawks’ lead was still three after one quarter.

The Vikings took the lead with 7:57 remaining in the first half. Shaffer took a direct snap and powered in from three yards out. Luke Myers’s kick was good and it was 7-3 Allentown Central Catholic.

Central Catholic’s defense had big stops late in the first half to keep Bethlehem Catholic from scoring. The Vikings went into halftime leading 7-3.

Bethlehem Catholic started the second half with a good drive but a key penalty ended the Golden Hawk’s drive. With 2:24 left in the third quarter and Bethlehem Catholic facing a fourth-and-one on their 28, they decided to go for it. Jacob Sutton took the handoff and got the first down by the nose of the ball.

A few plays later, Viking’s Nasir McLean intercepted a Luke Thomas pass in the red zone with 13 seconds left in the third quarter. This would be the theme in the second half.

Another good drive by Bethlehem Catholic ended on a turnover in the red zone. Thomas’ pass was picked off by Armonie Torres in the end zone.

“We called timeout and took it down. When the kids came over we asked them do you want to go for this,” said McGorry. “They all 100 percent screamed at me and said yes.”

They did. Shaffer called his own play and went in for the one-yard touchdown run extending the Vikings’ lead to 14-3.

Another drive by the Golden Hawks ended with a turnover. The Vikings’ Travis Foster intercepted a Thomas pass with 1:43 remaining in the game. The Vikings’ defense forced three turnovers in the red zone.

“We looked at the film the first time we played them and gave them way too much time to throw,” said McGorry. “We made the adjustments and wanted to make him move around in the pocket and be unsure of himself. We did that tonight.”

Vikings ran out the clock and won their third straight district title, 14-3. Shaffer finished the night rushing for 156 yards on 24 carries and two touchdowns.

“It’s amazing and we have such a great group of kids and we never gave up,” said Shaffer. “It’s our third straight District title and I am so proud of our team.”