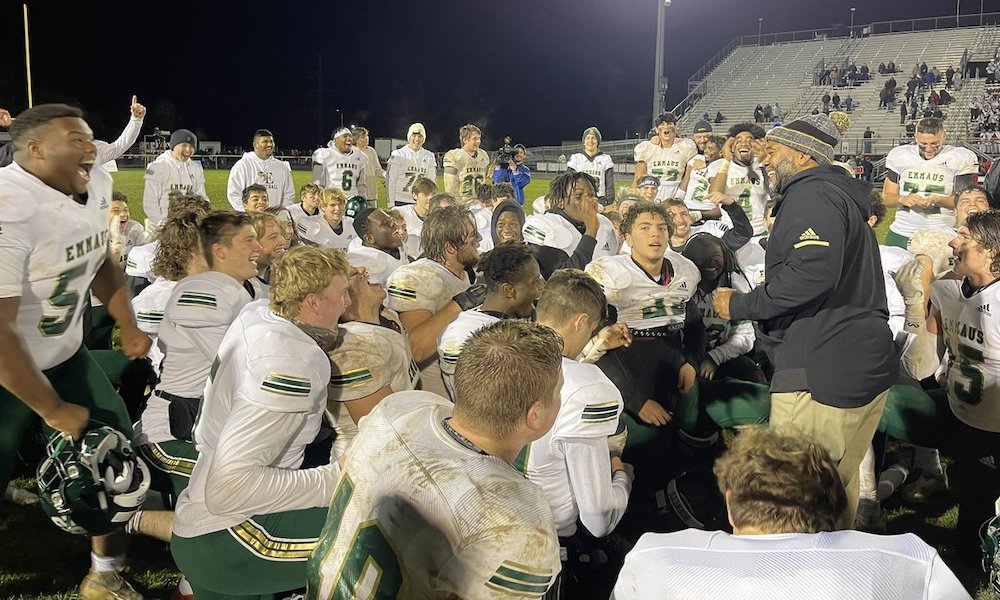 Emmaus met rival Parkland High School for the second time this season at Orefield Middle School. The first meeting saw the Trojans victorious 25-14, on a night where the wind was blowing and rain torrentially down-pouring. This time around, though, clear skies and comfortable temperatures favored Emmaus to come out on top 21-14.

Emmaus would go three and out on their first possession of the game and punted to the Trojans. Dahlir Adams took the first play 37 yards to the house for the Parkland score. It was 7-0 just five minutes in, looking like a great start. That, however, wouldn’t be the case as neither side was able to produce much offense for the remainder of the first quarter. Both defenses did get a takeaway in the opening quarter.

Into the second, it remained the same story as the first quarter. Plenty of opportunities for both offenses, but the defense were prevailing. Emmaus’ defense got their second takeaway of the night in quarter two, but couldn’t cash in. The halftime score was 7-0 in favor of the Trojans. Emmaus held their heads high going into the locker room knowing they were very much in this game.

Parkland received the second half kickoff but spilled it on the grass and Emmaus recovered. The Hornets’ third takeaway of the night proved to be a golden opportunity to start the second half.

Two plays later, however, Josiah Williams would be intercepted, for his second turnover of the night. The Trojans quickly got momentum back on their side. That wouldn’t lead to anything but a three and out offering Emmaus’ offense another chance. This time, Tyson Karat was able to connect with Jaiden Robinson for a 62-yard pass completion to set the Hornets up in the red zone.

One play later, Williams found Dylan Darville for the tying touchdown. It was now 7-7 with nine minutes left in quarter three. We had a ballgame. Parkland had a missed field goal in the late third quarter that started to shift the momentum in favor of the Hornets. Emmaus took that drive into Trojan territory and eventually Williams found Darville again. This time for the go ahead score and Emmaus was leading 14-7 after three quarters.

Emmaus started the fourth quarter with the ball as Parkland fumbled the ensuing kickoff following the TD. However the Trojans’ defense would get it right back, as they intercepted Williams for the second time. Emmaus’ defense had a night to remember, and they made some big time plays in the final quarter to give the ball back to Emmaus. Parkland found themselves in third and long at their own 10-yard line, when Luke Spang had the ball knocked out of his hands.

Emmaus’ defense with takeaway number five and this one set the Hornets up with first and goal. One play later Jared Groller cashed in the takeaway for 7, and Emmaus lead 21-7 with ten minutes left in regulation. Parkland got a much needed score on the next drive as Spang connected with Jack Harrison for the 45 yard score. Now 21-14, Parkland still trailed but finding momentum.

The two sides would trade punts for a while until Emmaus’s final drive with four minutes left. The Hornets pounded the rock with Groller, Tylik Jarvis, and forced Parkland to use their timeouts. As the clock ticked down, the Parkland timeouts went away, and Emmaus could start to feel it.

With under two minutes left, Emmaus had a fourth and three in field goal range, but decided to go for it rather than kick. Groller took the carry right up the middle, carried the pile past the sticks and that was the ballgame. Emmaus would run out the clock and the celebration was on!