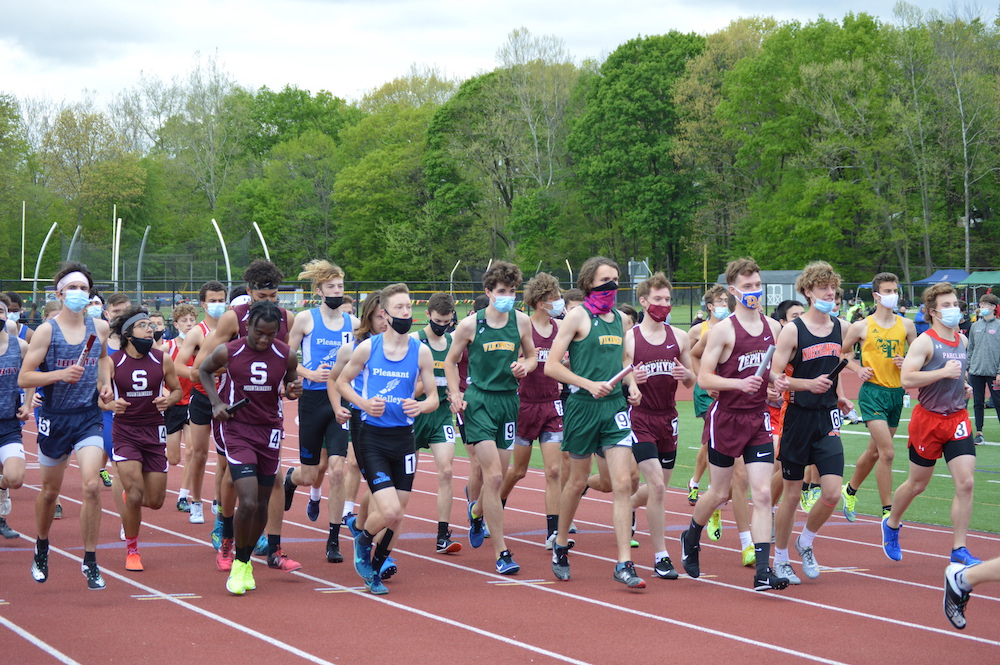 After a very different looking regular season due to the pandemic, the eighteen Eastern Pennsylvania Conference schools descended upon East Stroudsburg South High School on Monday, May 10, to take part in the league track and field championships.

It was a perfect, cool spring day for all athletes to compete. With all of the different schools and colors surrounding the Cavalier facilities, the atmosphere gave spectators and athletes a reminder of what sports looked like before COVID.

In addition to all of the positives surrounding the meet, there were some very impressive performances at this championship meet.

On the boys side, Nazareth won the meet with a score of 112.50 points. Liberty was the runner up with 96.50 points, and Easton took third place with 90 points.

Along with great team performances, certain athletes were able to make an exceptional impact on the meet. Parkland’s Mustapha Salau took home three gold medals on the day. He finished first in the 200m dash with a time of 22.22 seconds and first in the 400m dash, finishing with a time of 49.38 seconds. The senior from Parkland also played an important role in their team’s victory in the 4x100m relay.

Senior Cole Frank from Liberty saw tremendous success in three different events too. First, Frank ran the second leg of the 4x800m relay, which gave Liberty’s team a healthy lead for the final two runners. Liberty went on to win this event with a time of 8:14.89. Later in the day, Frank would come up short in the 1600m run, finishing third with a time of 4:28.36. The Temple University commit recovered well though in the 3200m run, winning his second gold of the day with a time of 9:52.77.

Moving forward to the girls side, Parkland won the meet with a score of 106.50 points. Liberty took second place, this time totaling 96 points on the day. Easton rounded out the top three with a score of 78.50 points.

One notable top point scorer for the girls was junior Kiana Young from Stroudsburg. She took home three gold medals, winning the 100m dash in 12.58 seconds, 200m dash in 26.06 seconds, and leading the way for the Mountaineer victory in the 4x100m relay, which finished in 50.80 seconds.

Another girl who stood out from the competition was Liberty distance runner Emily Jobes. The senior took gold in both the 1600m run and the 3200m run, with times of 5:13.42 and 11:20.28, respectively. These top finishes certainly helped the Hurricanes to their second place finish.

Other notable performances on the girls side were Sophie Emin from Easton in the 800m run, Tierney McCarroll from Pocono Mountain East in the javelin, Coral Shivok from Parkland in the pole vault, and Cailey Spanitz from Bethlehem Catholic in the pole vault.

The 2021 outdoor track and field season continues for many athletes on Wednesday, May 19, at Blue Mountain HS for the PIAA District XI Championships. Following this meet will be the PIAA State Championships, held at Shippensburg University.