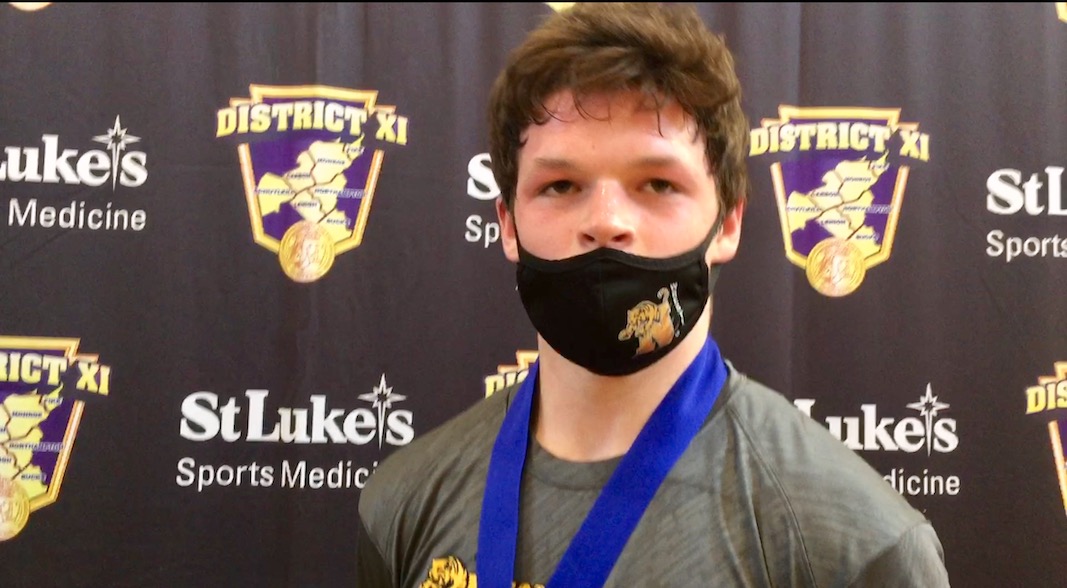 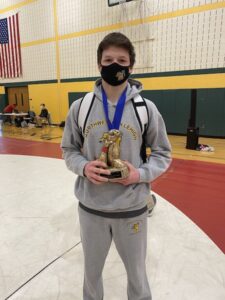 Growing up in a wrestling family, the Northwestern freshman never had to look too far for advice.

While brothers Caleb, Ben, Scott and Bobby were each decorated in their own right, the youngest Clymer is ready to carve his own path.

That process took another forward on Sunday when he claimed the District 11 Class 2A title at 145 pounds.

Clymer did it with a 4-1 decision over Catasauqua’s Jaryn Hartranft in the final, joining Caleb and Scott who won district titles as freshmen.

“I really tried not to look at who the opponent was, who was coming up,” he said. “It’s been a difficult year, so the only goal was to make it to the next step; keep winning; keep competing.

“The goal was to make it to regionals, and I did that. Now the goal is to make it to the next step after that.”  Clymer, who was seeded fourth, knocked off top seed Aaron Coccio 3-2 in the semis.

Against Hartranft, the freshman got a takedown in the first period to take a 2-0 lead before pushing his advantage to 4-0 with two back points in the third.

“I really didn’t have a plan, just kind of setting up a shot, whatever came first,” said Clymer. “The takedown, I think was a single-leg, kind of a little bit of a misdirection which was huge to start off those first points and feel a little bit more comfortable.”

Hartranft got an escape in the final minute and then nearly had a reversal but Clymer was able to work out of it.
It was the type of mat awareness not always seen from a freshman, but something that was no surprise for Clymer, whose family has helped him develop that base.

“I’ve been wrestling for a long time, but they are the reason that in certain situations, like riding from top, they are the reasons why I’m at where I’m at,” he said. “All of my brothers have been huge with that, coming up and working with me in the room, or going down to wrestle with them somewhere.

“They’ve all made me the priority to make me the best I can be, which I am super appreciative of.”

Scott and Ben were also two-time regional champions, and both also won state titles. Scott accomplished the feat in 2006, while Ben did so in 2008.

Caleb was a three-time district champion and won a state title in 2018 after placing third as a junior and sixth as a sophomore. He was also a regional champ his senior year.

Dalton scored early again in his match with Coccio, getting a first period takedown for a 2-0 lead.

The Tamaqua senior, who was also unbeaten entering the tournament, tied it with a reversal in the third period, but Clymer got an escape in the final 0:02 to seal the win.

Clymer missed the beginning of the season due to COVID-19 related concerns and entered the tournament 4-0. But he made the most of his time away from the team.

“We have a few mats,” Clymer said of his house. “The time off, where I missed the first four matches, we had a mat rolled out and Scotty was coming over and I was rolling around with him, working on some different stuff.

“The one thing that was really nailed into me this year with him was my top riding … which has been super huge so far.”

“I don’t think he needed a confidence boost, he’s got confidence,” said Tigers’ head coach Jim Moll. “But I think it’s validation for himself that now he belongs here.

“When I joined the staff at Northwestern, I think he was three, so to make myself feel old. So he’s been in the wrestling room, running around, jumping on bigger kids since he’s three years old.”

And now the youngest Clymer, who is the last of the brothers, can add to his family’s already-overflowing trophy case that’s likely not about to stop growing anytime soon.