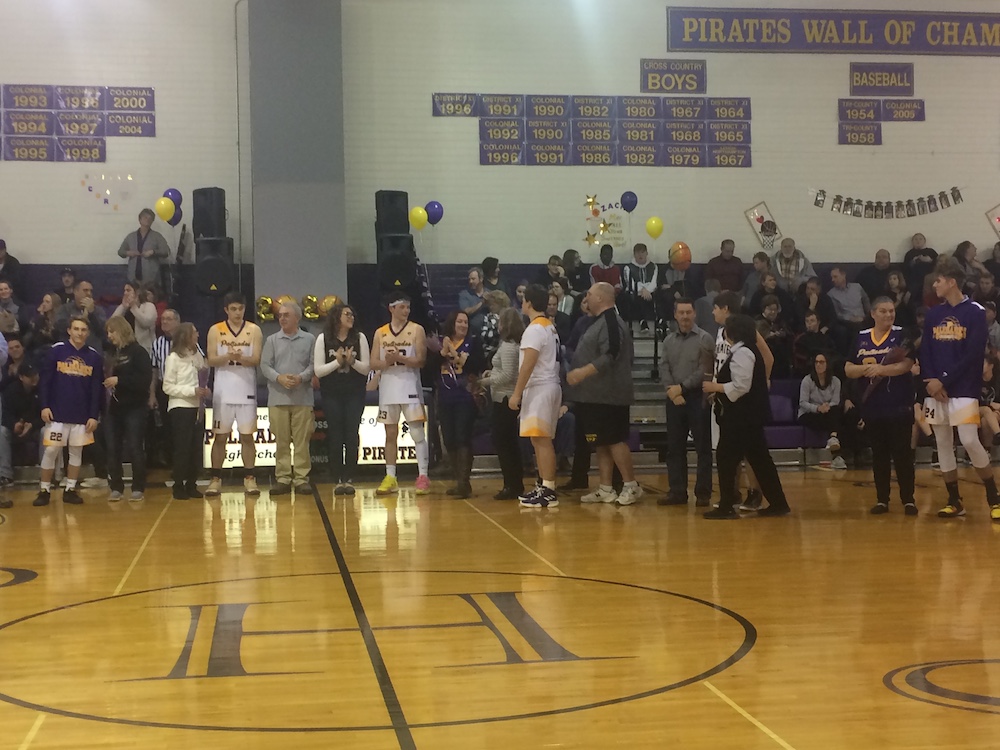 Tuesday night the Palisades Pirates hit the court to face Saucon Valley for their Senior Night. Though it was their final game of the season, the Pirates’ starting lineup looked a little different. Their starters were Steven Yannett, Gus Yocum, Pat Delabar, Zach Shoemaker, and Bobby Snyder. Saucon started the game with Nick Snead, Brandon Binn, Kurt Pepper, Kyle Patten, and Ryan Lebo on the court.

Palisades got the opening tip, though Sacuon scored first with Binn shooting a three-pointer. The Pirates came up quick with a basket of their own, to make it 3-2. Both teams went back to back to score, with Snyder scoring Palisades’ first three baskets. Binn shot his second three-pointer of the night, making Saucon back in the lead. Saucon scored again, the score changing to 10-8 when going into the first timeout. Snead widened the lead even more with a basket. One free throw later, Saucon was up 13-8. Palisades’ regular lineup came in, but it didn’t seem to help. Ike Aherne for Palisades went to the free throw line and made one, making the score 18-9 after the first quarter.

In the first few minutes of the second quarter, both teams were silent, but Saucon started off with three baskets and continued tough defense. Palisades had no chance, and were down 24-9 with 1:36 left in the half. Shoemaker got the next basket, but Patten returned with one of his own. At 50 seconds a timeout was called, leading into Johnson heading to the free throw line at 47 seconds. Saucon then drained the clock and the half ended with Saucon leading 26-11.

In less than a minute into the second half, Saucon scored twice. Palisades started to crumble as the lead widened to 22 points, or 33-11. Ryan Musantry came in big for the Pirates with a three pointer at 6:20. After a change of possession, Musantry hit another three. Delabar got the rebound, giving an assist to Binn, and the score changed to 37-16. There was back and forth play for both teams until Snyder hit a three-pointer, making the score 39-21. A long two for Snead led to Brandon Fox hitting another three for Palisades. With three minutes left in the quarter, Saucon scored once again. Gus Yocum headed to the free throw line and made one. With the final seconds of the third quarter, Saucon got the ball, but couldn’t connect. The score was 45-27 with one quarter to go.