Parkland girls make others ‘eat bubbles’ in 3A swimming 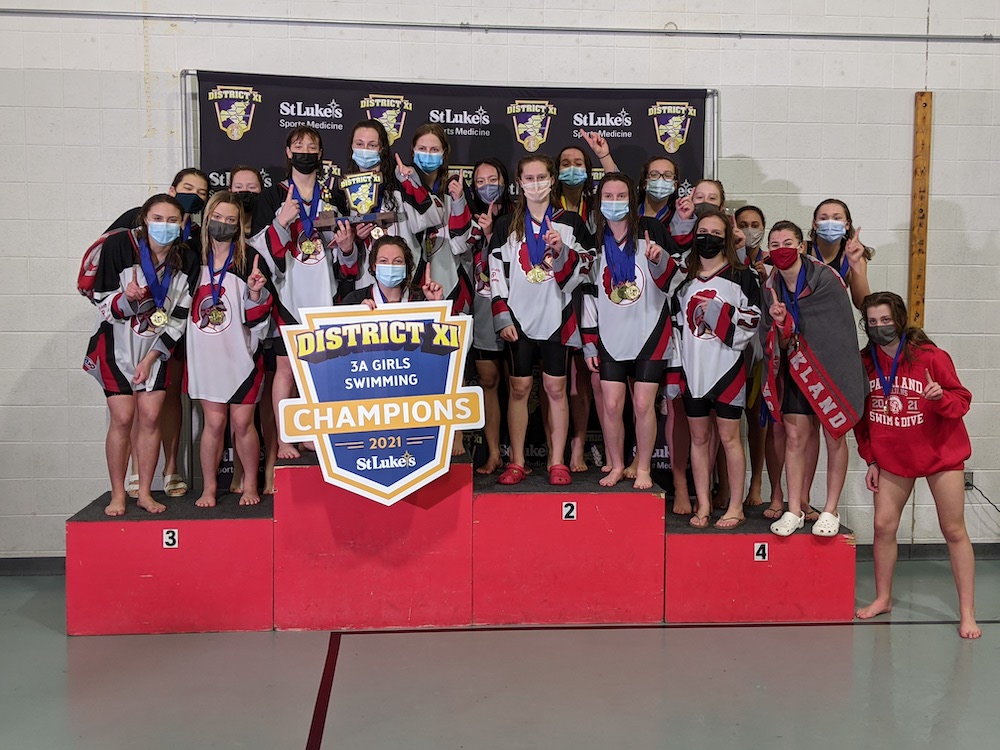 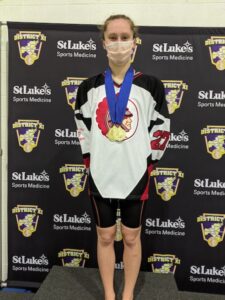 The handmade sign on the wall of the Parkland Natatorium is done on bright orange paper and thick black marker. It tells opponents to “EAT MY BUBBLES.” As it turns out, the competition spent much of the morning on Saturday doing just that. Parkland swimming took gold in eight of the 11 events contested Saturday, leaving just two gold for Emmaus and one for Southern Lehigh.

In the end, the Lady Trojans easily won the team title, besting second place Emmaus 553-408. It was no surprise that Parkland junior Kayla Johnson, with four gold medals around her neck, was named the Dennis A. McGinley Award winner as the meet’s top performer.

Johnson took gold in individual events with wins in the 50 and 100-yard freestyle events and also metaled as part of the 200 and 400-yard freestyle relay teams for the Lady Trojans. Johnson came within :00.27 of breaking the district record in the 50-yard freestyle, a record set by former Parkland swimmer Siena Salvaggio in 2016. “I felt coming in that I had a shot at the record,” said Johnson. “I think definitely next year I will be able to get it.”

After Parkland took the first two gold medals of the day, Emmaus stepped in to take gold in the 200-yard IM when Lauren Sharp finished with a time of 2:06.94, just ahead of Parkland’s Madison Tewksbury, one of Sharp’s closest friends. The two squared off again in the 100-yard breaststroke with Tewksbury grabbing gold there with a time of 1:03.90. While Parkland and Emmaus are fierce rivals in the pool, the two teams have many friends on the other side of the pool and Tewksbury and Sharp are among two of the closest.

“It was amazing to get to race against one of my closest friends like Maddie and to be in the same pool again, not racing virtually like we had to do,” said Sharp. “It was great to get that race feeling instead of being in my home pool racing other teammates. Then to get the win made it even more special.”

“I had a really fun time swimming against Lauren, because we are such good friends and it was like this last year, too,” said Tewksbury of the friendship and rivalry between the two. “We really push each other and it always stays friendly.”

After Johnson’s win in the 50-freestyle, Emmaus hit gold when Chloe Vlaeminck won gold in the 100-yard butterfly, besting Parkland’s Sophia Cerimele by :00.54 seconds. The only other gold medal to not go to a Parkland swimmer or relay team was in the 100-yard backstroke when Southern Lehigh’s Garrity Ford was the only finisher to break the one-minute mark, finishing at :57.30. 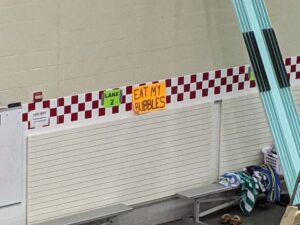 Only the gold medal winner in each event goes to states this season in an effort to mitigate the number of contestants because of COVID considerations. The change put a little extra effort on competitors.

“It was a lot of pressure because I just missed states the last two years, so it was kind of a challenge,” said Stevenson, who captured gold in the 400-freestyle relay in addition to the 200 and 500-yard freestyle events. “Having direct competition in the lanes next to you also changed things. It was great to see how other competitors are doing and how the rest of my team was doing in the direct competition against other swimmers.”

While Parkland dominated the meet, swimmers and coaches agreed that with the COVID concerns and precautions that had to be taken throughout the season, it was nice to simply get in a pool and “swim fast and have fun,” as Emmaus coach Tim O’Connor preached coming into the competition. After the girls’ session of the championships, O’Connor looked back on the morning and termed the day to be a “mission accomplished.”

The last lap of the 400 freestyle relay with Kayla Johnson swimming and winning her fourth gold medal.