The first day of the District 11 swimming championship ended with one district record falling at the 2A level. Here’s a look at what happened and how things look heading into Saturday’s competition 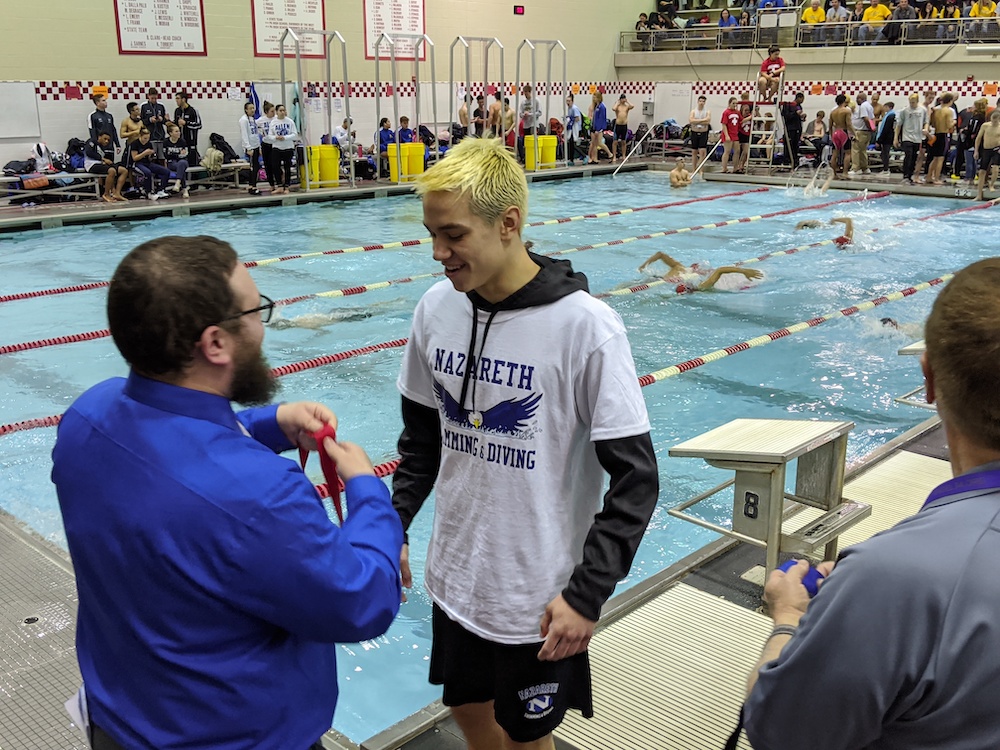 The news of the day in the 2A classification came when Moravian Academy’s Pepper Richey set a new district record in the 100-yard butterfly with a time of 55.83. The old mark of 55.91 was set in 2017 by Moravian Academy’s Kyra Manson.

“My best time was a 55, so I was aiming for that, but I wasn’t really look for records; I just wanted to have fun tonight,” said Richey. “I can’t believe that I did it. I realized it when I looked at the board, because I did know that the record was 55.9 something and I saw that I was at 55.8.”

In the 200-yard freestyle, Allentown Central Catholic’s Mimi Norris finished with a time of 1:57.98 to give her the gold medal. Norris finished 1.08 seconds ahead of Panther Valley’s Erika Zimmerman, who took second place and will make her second trip to states.

“I felt really good in the race, but when I looked up at my time, I was surprised at just how well I had done. It’s a great feeling right now to have done so well, it was great,” said Norris of her victory.

Notre Dame – Green Pond’s Gianna Farina came into the meet looking for her fourth straight district gold medal in the 200-yard IM. She posted a time of 2:11.46 in the event, besting Marian Catholic’s Maddie Dando, who finished second with a time of 2:15.89.

Three of the closest races of the day came back-to-back-to-back. First, Francesco D’Avella of Notre Dame – Green Pond edged out Pen Argyl’s David LaBarre by .66 seconds to win the 200-yard IM. Saucon Valley’s Ryan Kerr finished third with a time of 2:01.88 and fourth place went to Derrick Yuengling of Blue Mountain with a time of 2:08.97. Next up was the 50-yard freestyle for the girls and Olivia Haas of Blue Mountain had just a .18 second margin over Moravian Academy’s Anna Stoudt. Julia Balulis of Pottsville and Abby Dudash of Mahanoy Area joined the two top finishers on the medal stand.

Emmaus and Parkland continued their domination of 3A swimming in both relays and individual events. Early in the day, Emmaus relay teams were the story. First, the girls took gold in the 200-yard medley relay with Parkland finishing second. The Emmaus boys followed that up with gold in their 200-yard medley relay, but this time, it was Southern Lehigh finishing second.

From there, Emmaus or Parkland swimmers finished first in each of the remaining events. Parkland took gold in the 200-yard freestyle when Kayla Johnson finished with a time of 1:53.82, followed by Nazareth’s Raquelle Roesch, Northampton’s Olivia Szerencsits and Parkland’s Olivia Stevenson. Parkland also picked up individual gold in the 100-yard butterfly with Annie Walls finishing in the top spot, followed by Bella Buchman (Emmaus), Kiera Laslo (Nazareth) and Devon Corvaia (Parkland).

“I just wanted to do my best and my goal is always to cut my times and I didn’t get the time that I wanted,” admitted Johnson. “I’m just happy that I won and I’m excited about going back to states.”

“I knew it was going to be a good race and me and my teammates knew what we needed to do, so we just went out and did it,” said Luke Rautzhan of his win. “I know what to expect at states this year and it’s going to be a lot of fun to head out there and show how hard we’ve worked.”

Emmaus took gold and silver in the girls 200-yard IM. Lauren Sharp finished with a time of 2:06.85 to grab gold and Chloe Vlaeminck won silver with a time of 2:08.69. Liberty’s Abigail Mack (2:10.92) and Parkland’s Madison Tewksbury finished fourth at 2:11.48. Emmaus’ Michael Iacobelli won the 200-yard IM with a time of 1:55.05 and was followed by two Parkland swimmers in third and fourth when James Zhang took second and Shawn Kushner finished in third place. Southern Lehigh’s Matt Wendling took fourth. In the final individual event of the day, Gio Germano (Emmaus) finished first with a time of 51.20 to edge out Liberty’s Patrick Gilhool (51.30), Nazareth’s Gabe Laslo (51.35) and Andrew Wendling of Southern Lehigh (52.18).

Emmaus’ Devin Metzger won the 50-yard freestyle event, finishing with a time of 21.46. The top four finishers were within .36 seconds of each other with Nazareth’s Brendan Alvino finishing second at 21.49, followed by Easton’s Joseph Frasca at 21.82 and Liberty’s Addison Collins at 21.90.

“It’s pretty surreal, it really is,” admitted Metzger. “I never thought that I would be wearing anything like this. The rest of the guys are all really good and they made it a tough race, that’s for sure. I’m at a loss for words right now.”

Metzger will be competing in his first individual event at states after being at states in relay events.