A Golden Ending and Year for Nativity 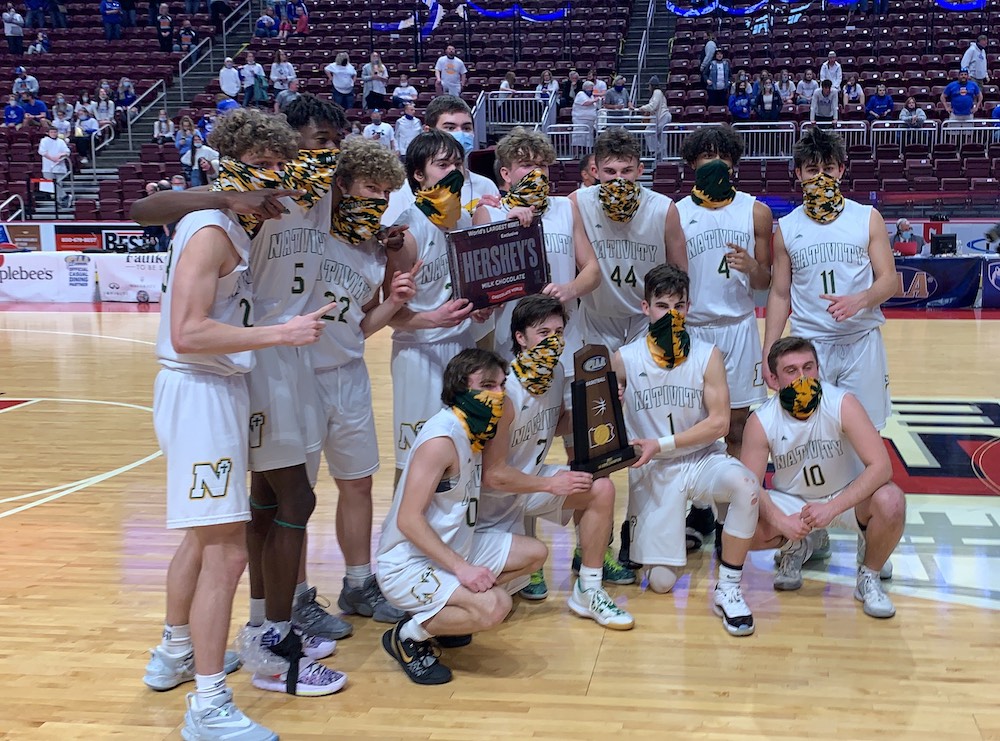 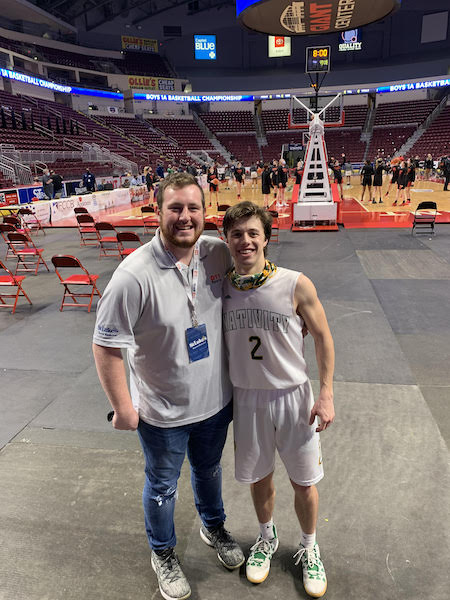 Nativity made it to the state quarterfinals and had a date with Sankofa Freedom awaiting them. Then we all know what happened next. The Hilltoppers never got the opportunity to finish their state title quest in 2020, and came into this season with unfinished business. Head coach Mike Walborn set up a very difficult non-league schedule to test the veteran Toppers during the season. They opened their season in early December against fellow state champion Allentown Central Catholic, where they suffered one of their four losses on the season. The other defeats came against 3A District XI champ Executive Education, 4A Bethlehem Catholic, and 6A Muhlenberg. Nativity breezed through their Schuylkill League Division III schedule despite a scare from rival Marian Catholic late in the season. After qualifying for the league playoffs, the Toppers ran by Blue Mountain and defeated powerhouse Pottsville en route to its first Schuylkill League title in school history. This was just the beginning of what turned out to be the most memorable season in Nativity boys basketball history.

The Hilltoppers made their way through district play with a victory over Roberto Clemente Charter at home and then the championship victory over Notre Dame East Stroudsburg. Their matchup for the first round of states was against St. John Neumann of Williamsport. Charged by division one recruits Davion and David Hill (brothers of NBA player Alize Johnson), the high flying Knights made the trip atop Lawton’s Hill to take on Nativity. The game came down to the final shot, as Davion Hill’s half court attempt fell off the mark giving Nativity a spot in the state semifinals against LaAcademia Charter. In a visit to Lancaster Catholic High School, the thrill from the previous game prevailed as the game went into overtime, where Nativity prevailed and Hershey kisses came flying from the rafters toward the team. Their matchup for the state final turned out to be Berlin Brothers Valley from District V. The 27-1 Mountaineers came into the ball game averaging 78 points per contest, mostly from 20+ points per game from Pitt-Johnstown recruit Elijah Sechler and 6’5 senior Abe Countryman.

Immediately after fellow Coal Region team Mount Carmel defeated Neshannock for the 2A girls crown, Nativity fans lined up to make their way into the biggest stage in Pennsylvania basketball, the Giant Center in Hershey. With each team able to sell 650 tickets, there was a feeling of normalcy in the arena with student sections, cheerleaders, and fans all around. Nativity opened the game with a Kegan Hertz bucket and Julius Walborn three to jump out to a 5-0 lead. The Toppers kept the lead throughout a sloppy, nervous first quarter in which Nativity led 8-5 after. The beginning of the second quarter was where the tides of the game completely shifted. Berlin’s high throttle offense gained some steam, as they went on a 9-0 run to take a 14-8 lead before a Topper timeout. Berlin freshman and coach Tanner Prosser’s son, Pace Prosser nailed two deep three pointers before halftime, putting them up 25-15 by halftime. Nativity was hurt by 12 turnovers in the opening half of play and second leading scorer Marquis Ratcliff saw limited action with foul trouble, only scoring one point.

Coming out of the half, Berlin didn’t stop their rally. They scored the opening two buckets of the second half to extend their lead to 14 points and it seemed as though Nativity needed some momentum immediately to get back in the game. My wish was their command, as Berlin went cold, forced turnovers and hard takes to the basket trimmed the deficit into single digits and eventually to six points with 2.0 seconds on the clock in the third quarter. With the ball along the baseline, Kegan Hertz caught a pass and shoveled it to Cody Miller, who drained a three as the buzzer sounded, trimming their deficit to three by the end of the quarter.

Nativity fought their way back into the game and had a chance to tie in the early fourth quarter. Early in the fourth, Jake Hoffman drove to the baseline and found Kegan Hertz under the hoop for a basket and foul, where he connected and tied up the game. The high stakes of the game hit every player on the floor after this though, as both teams went scoreless for the next few minutes until there was under a minute to play.

Tied at 35, Berlin senior, Elijah Sechler, nailed a beautiful pull up jumper from the middle of the lane to put his team up by two. As time ticked away off the clock, Kagan Hertz attempted a three pointer from the top of the key that was off the mark, but was rebounded by Cody Miller who shot from the elbow. It hit nothing but net and tied up the score once again with 25 seconds to play.

Berlin called a timeout to set up a play for the last shot, but a traveling violation was called with 4.2 seconds to play. Both teams exchanged timeouts to get a plan together for what could be the final play. Nativity inbounded the ball to Ratcliff, who then passed ahead to Miller and he attempted a Kawhi Leonard style fadeaway from the corner that hit the rim and backboard before falling off the rim as the horn sounded.

Overtime. For the second time in as many games, the Toppers were headed for more free basketball. Everyone in the arena was on their feet for these extra minutes. Sechler opened up the overtime period with another jumper to put Berlin ahead by two. Nativity answered though, as Marquis Ratcliff scored a tough layup and was fouled, but the foul shot was missed.

The clock ran all the way down inside of two minutes before Jake Hoffman was fouled in the double bonus. He hit both free throws to put the Toppers ahead for good. After Pace Prosser missed a deep three point attempt, the foul shooting game began, as Kegan Hertz and Marquis Ratcliff each hit one of two free throws, Julius Walborn added two more, and Keegan Brennan was 6-6 in the late stages of the ballgame to help seal the victory.

Despite a Sechler three-pointer and two foul shots after a turnover to cut the deficit to 49-47, Brennan sealed the Hilltoppers first state title victory with two free throws. A half court attempt from Berlin missed wide. Brennan retrieved the rebound and threw the ball up to the scoreboard as time expired. The celebration was on.

Kegan Hertz went to receive the trophy and chocolate bar and immediately was swarmed by his Topper teammates. After they got pictures from the press, they immediately sprinted over to their fellow students in the student section to celebrate. The senior class of Kegan Hertz, Keegan Brennan, Jake Hoffman, and Cooper Chiplonia will be remembered forever inside Nativity and Schuylkill County basketball history. Nativity broke the curse of Schuylkill League boys’ basketball teams to win a state championship, being the first since Saint Clair in 1970. The team was greeted with a parade through Pottsville as they returned to Schuylkill County.

Nativity’s success overall comes back to one word, family. The school, community, team, and students all support each other like a family and are always together through it all.