The opening day of the District 11 2A swimming championships opened well for Pottsville’s Taleah Ruben and got better from there. The senior swimmer was among the first into the pool when she swam the first leg of the first event of the day, the 200-yard medley relay. Her team – consisting of Ruben, freshman Elizabeth Martinko, junior Carly Mohl and senior Juia Balulis, took gold in the event finishing .33 seconds ahead of second place Blue Mountain.

Ruben was able to get her individual events out of the way on day one as well, having two more gold medals strapped around her neck with first place finishes in both the 200-yard IM and the 100-yard butterfly.

“It’s the best feeling in the world,” said Ruben after collecting the third medal. “I felt really good this morning and I was so excited for our relay, because I have my teammates next to me and we were all pushing for gold together.”

Ruben will also be a part of Pottsville’s 400-yard freestyle relay team that will swim in the final girls’ event of the meet on Saturday afternoon.

Pen Argyl’s Danny Hayes put together a record swim in the 100-yard butterfly when he finished in a time of 50.21 seconds to break the previous record of 50.69 set in 2019 by Bangor’s Brenek Strawn.

“I am so glad that I could do something great in my senior year,” said Hayes. “This was my last time competing in the fly for districts and it feels great. This would make four straight trips to districts, but they were cancelled back in 2020, so I didn’t actually get to swim.”

Blue Mountain leads the team standings on both the boys and girls’ sides thanks to a strong opening day. The girls’ team took the top spot when Katherine Sarnes took gold in the second event of the day, the 200-yard freestyle, posting a winning time of 1:57.88. Central Catholic’s Mimi Norris finished second at 1:59.20, just .12 seconds ahead of Schuylkill Haven’s Erika Zimmerman. Mollie Sarnes also finished in the top five for Blue Mountain by placing fifth.

By the end of the day, the Lady Eagles held a 242-195 lead over second-place Pottsville.

On the boys’ side, Blue Mountain opened the day with a win in the 200-yard medley relay and led through the rest of the day. The team of Noah Powers, Taber Perry, Matheson Bair and Logan Stein finished 2.5 seconds ahead of Central Catholic.

Notre Dame picked up back-to-back first place finishes when RJ Farina won gold in the 200-yard freestyle with a time of 1:44.00, over six seconds ahead of North Schuylkill’s Travis Stanitis, who finished second. Senior Francesco D’Avella finished in a time of 2:00.20 to win the 200-yard IM.

The Eagles team of Bair, Perry, Stein and Powers returned to the podium to take the team’s second boys’ relay team medal of the day when they won the 200-yard freestyle relay. The win gave Powers three gold medals on the day.

Gold medalists in each event are guaranteed spots in the PIAA championships which will be held March 18 and 19 at Bucknell University in Lewisburg, PA for 2A swimmers and divers. The 3A state competition will be March 16 and 17, also at Bucknell. Swimmers and relay teams that do not take gold can still receive a “bid” to states by posting one of the top times from across the commonwealth. Those determinations will be made following the completion of district tournaments.

GIRLS TEAM STANDINGS THROUGH DAY ONE

BOYS TEAM STANDINGS THROUGH DAY ONE 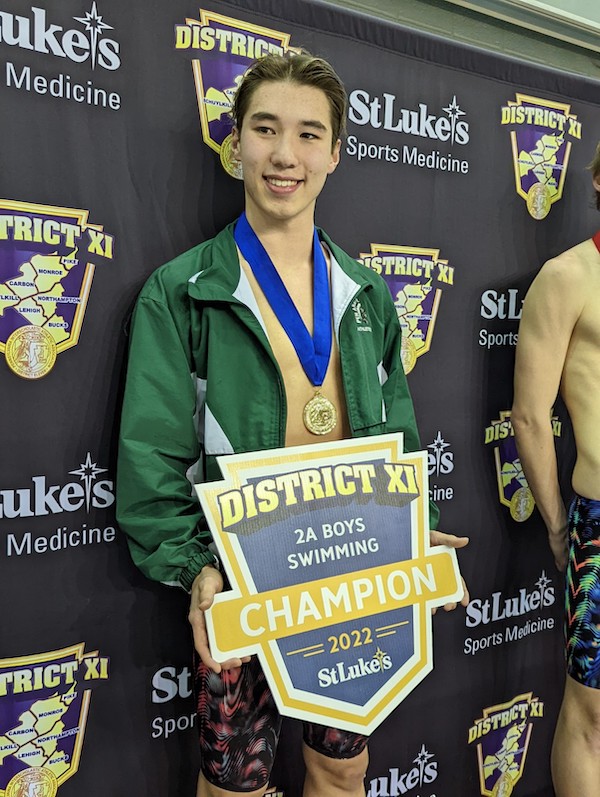 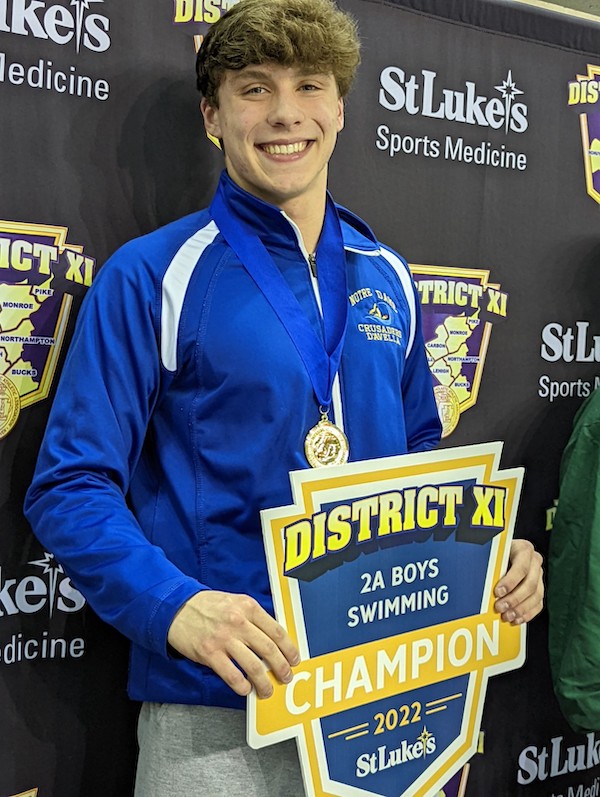 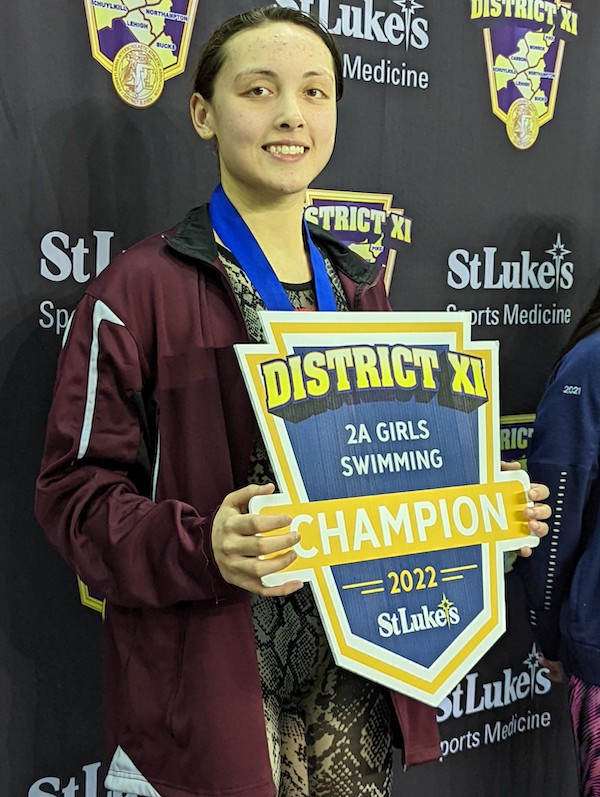