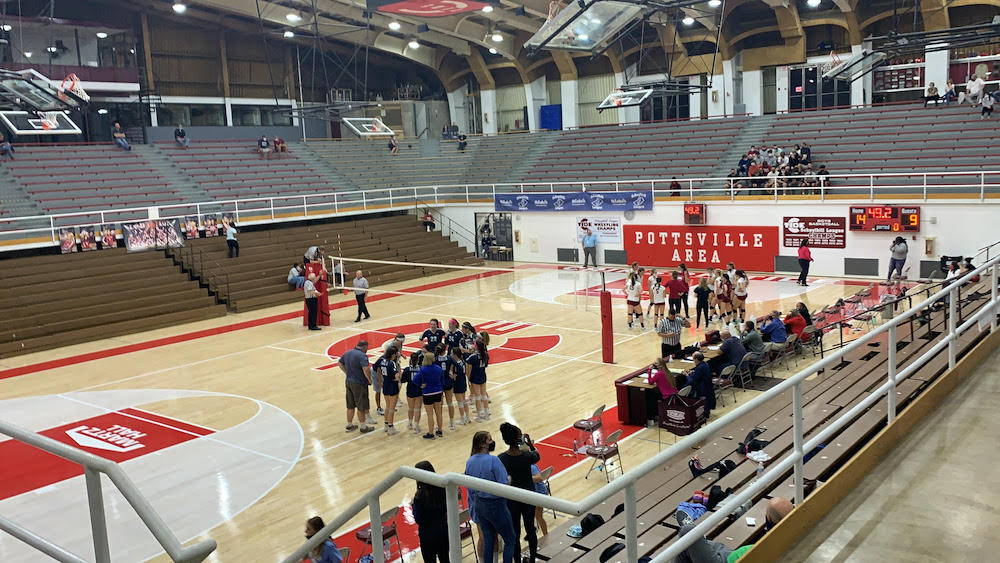 With homecoming festivities and spirit week enthusiasm on the rise, both the boys soccer and girls volleyball teams of Blue Mountain brought home gold from their respective league title matches last night. The boys used a quick start to coast to a 4-0 victory over defending champion Jim Thorpe, while the Lady Eagles volleyball team rebounded after losing the first set to win three straight sets and defend their title from last season.

Blue Mountain and Jim Thorpe entered the title game after the Eagles defeated Nativity BVM 6-3 and Jim Thorpe ousted Minersville 1-0 in their respective semifinal matchups. In their previous matches during the regular season they split, with each team winning when they were away and losing at home. Blue Mountain won early in the year 2-1 and Jim Thorpe gave the Eagles their second defeat of the year a little over a week ago.

The Eagles started out hot, as sophomore Pablo Colindres netted the first goal within the first ten minutes. Freshman Ryan Mundy followed quickly after with a goal of his own three minutes later to put the Eagles up 2-0. Just before halftime, junior Aidan Valentine launched a shot into the back of the net to increase the Eagles lead to 3-0. A solid defensive effort limited Jim Thorpe’s scoring opportunities and made it tough for the Olympians to fight back into the match. Miko Barbe added a fourth goal early in the second half and the Eagles coasted to their second league crown in three years after missing the league playoffs last year.

About thirty minutes after the boys soccer team received their gold medals, Pottsville and Blue Mountain hit the court for volleyball at the newly renovated Martz Hall. “The Mecca” received an upgrade to its flooring and with the addition of the new, lighter colored hardwood came permanent volleyball lines. Previously Pottsville would play home matches at their smaller gym located inside their high school and only the league championship would be played at Martz Hall, with the lines being taped on the sides of the court. The new upgrade though allowed Pottsville to add permanent lines to the court and gave the Pottsville volleyball team the feeling of playing their entire season at Martz Hall.

Blue Mountain swept both Marian Catholic and Pine Grove in their quarterfinal and semifinal matches to reach the final, while the Lady Tide defeated state ranked Nativity BVM (3-1) and Panther Valley (3-0) to reach the final. Blue Mountain was victorious in the first two matches that the two played this season, with the latter match being played just last week where the Eagles won 3-1. The Eagles were looking to defend their championship from last year as well. The headline going into tonight’s matchup though was the return of Pottsville senior middle/outside hitter Payton Kleckner. Kleckner missed a majority of the middle of the season due to injury but returned this week in the league playoff matches. After Pottsville won a set against the Eagles last week without her in the lineup, the match was primed to be a battle.

The first set went back and forth until Blue Mountain took a 16-10 lead in the first set, forcing Pottsville head coach Maria Sherakas to call a timeout to settle her girls down. The decision worked out to perfection, as the Lady Tide clawed back to tie the set at 24-24. A Payton Kleckner kill and an Eily Painter ace gave Pottsville a 1-0 advantage.

Blue Mountain rebounded in the second set to take a 25-18 victory and tie the match. The third set was highly contested and was close down the wire, as the set was deadlocked at 23-23 before a miscommunication between Pottsville players led to a point and a Myah Conway blast down the line gave the Eagles the third set. Riding the momentum from the decisive set win, the Eagles cruised through the third set and won their second straight league title after a Grace Woll kill gave them a 25-14 fourth set victory. Myah Conway led the stats for the Eagles with 23 kills, 7 blocks, and 7 digs. Grace Woll and Paige Thomas also had huge games for Blue Mountain. Woll added 14 kills, 18 digs, and two aces, while Thomas added a game high 12 blocks to go with nine kills. Both teams will advance to the District XI playoffs, where they both should receive higher seeds and possible home matches. 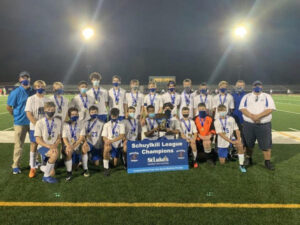 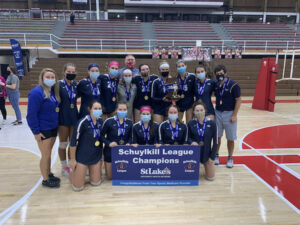