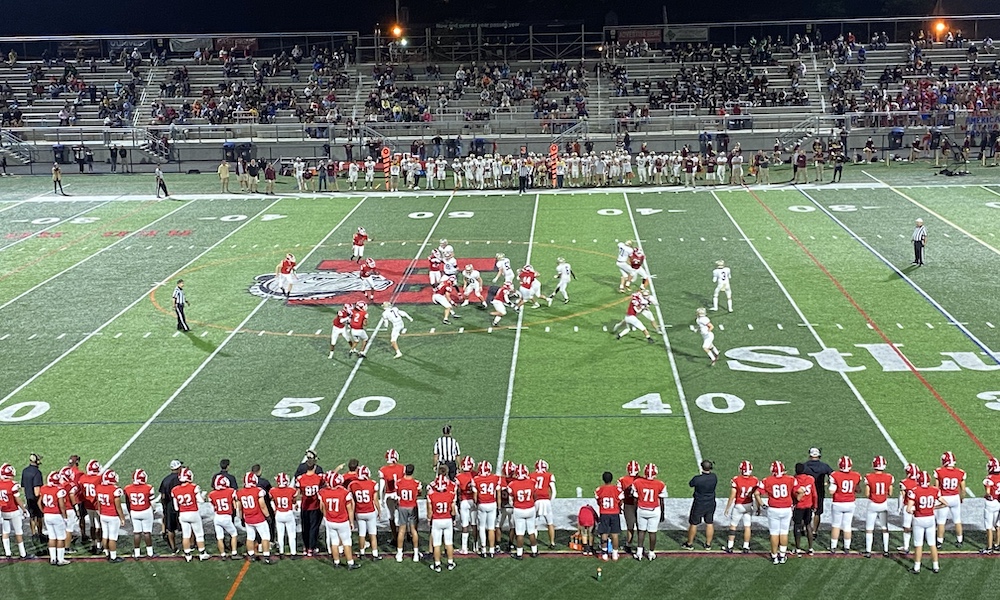 Friday evening, Easton’s Cottingham Stadium held an intense football game between the Easton Red Rovers and the Whitehall Zephyrs. Easton has struggled this season, and they had hoped to win their first game. Whitehall, came into the game with a record of 1-2. Easton’s record was 0-3. The match up seemed to be pretty even.

To start off the first quarter, Easton received the ball. However, they went three-and-out right away. Unfortunately, for the Red Rovers, kicker Austin Martellucci’s punt was blocked, which set Whitehall up for a touchdown made by the Zephyrs’s quarterback Trey Dogmanits, to wide receiver Mason Marencik-Delvalle. This gave Whitehall an early lead. With the extra point made by kicker Andrew Deutsch, it set the score to 7-0, Whitehall.

Moving into the second quarter, the score still remained 7-0 Whitehall. However, this quarter proved to be a back-and-forth quarter by the two teams. Whitehall scored another touchdown at the beginning of the quarter, made by Tony Bullock, which gave Whitehall the 14-0 lead. However, what started off as a 36-yard return made by Easton’s William Day, ended in a powerful drive by the Red Rovers which culminated in a touchdown. Both of Easton’s running backs, J’Vier Johnson and William Day, led this drive with numerous carries to get down to the end zone. From the three-yard line, Day carried it in for the touchdown, which made the score 14-7, Whitehall.

Whitehall was unable to make much of anything happen with their next drive, so Easton got the ball back right away. Whitehall’s kicker, Cole Richards, punted out of Whitehall’s own end zone. The punt didn’t make it too far, which led to a recovery by J’vier Johnson at Easton’s own 33-yard line. Because of this field position, wide receiver JuJu Fears made a touchdown pretty quickly, which tied the score up at 14-14.

Whitehall’s Aiden Parvel had a big return of Martellucci’s kick. This started the Zephyrs drive off at their own 44-yard line. Although the Zephyrs had great field position, the Red Rover’s defense showed strong resilience throughout this drive, especially with big plays made by Sean Wilson, one of Easton’s captains and leaders this season. He made a huge deflection on one of Dogmanits’s passes. Additionally, on third and four, Wilson came up with a huge sack on Dogmanits, which set up for a Whitehall punt.

Although Easton got the ball back, it was immediately intercepted by Whitehall. A huge pass was received by Whitehall’s Aiden Barbell, which gave them field possession at their own 14-yard line. With only 14 seconds left on the clock, Sean Wilson made a huge sack again on Dogmanits. Because of this, the score remained a tie at 14-14 going into the half.

With the third quarter underway, Whitehall started with the ball from their own 35-yard line. The pass was to wide receiver Jack Kochler, who ran all the way to Easton’s own 35-yard line. Dogmanits passed to Nigel Linton, who came up with the touchdown, making the score 21-14, Whitehall.

Easton’s drive began at their own 35-yard line. This drive was short lived however, due to an interception made by Whitehall’s lineback Carter Troxell. Despite the interception, Whitehall failed to come up with anything on their drive with a 15-yard penalty for a block in the back. This set them back and the team was unable to get the first down. The third quarter ended with the score of 21-14, Whitehall.

To begin the fourth quarter, Whitehall punted to Easton. On the Easton carry, Johnson slipped and dropped the ball. Whitehall’s defensive lineman Kaden Weaver, recovered the fumble on Whitehall’s own 19-yard line. With many carries by Whitehall’s running backs, it set up a catch by Jack Kocher for a Zephyr touchdown, which gave Whitehall a much stronger lead at 28-14.

Easton went three-and-out on their next drive. They set up in punt formation. Due to a high snap over the head of  Martellucci, he was unable to punt the ball as it ended up in the end zone. Martellucci did recover the ball from the end zone, but could not avoid the safety for Whitehall, which broughtthe score to 30-14, Whitehall.

Whitehall received the ball back. Aiden Parvel signaled for a fair catch at Whitehall’s 44-yard line. During this drive, Sean Wilson suffered an injury that kept him out for the remainder of the game. This was a huge loss for the Red Rovers. On third and two, from the 15-yard line, Mason Marencik-Delvalle carried it to the two-yard line. From the two, Marenick-Delavlle carried the ball in for the touchdown, which made the final score of the game 37-14, Whitehall.

Easton’s next Football game will be played next Friday, September 30th, at Pocono Mountain East High School, in the hopes of the team’s first win of the season. 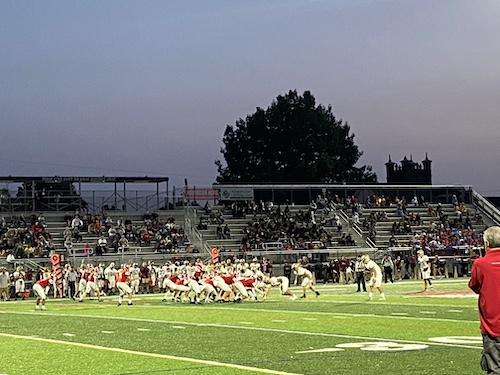 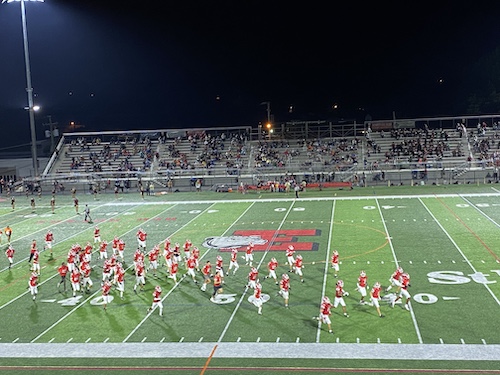