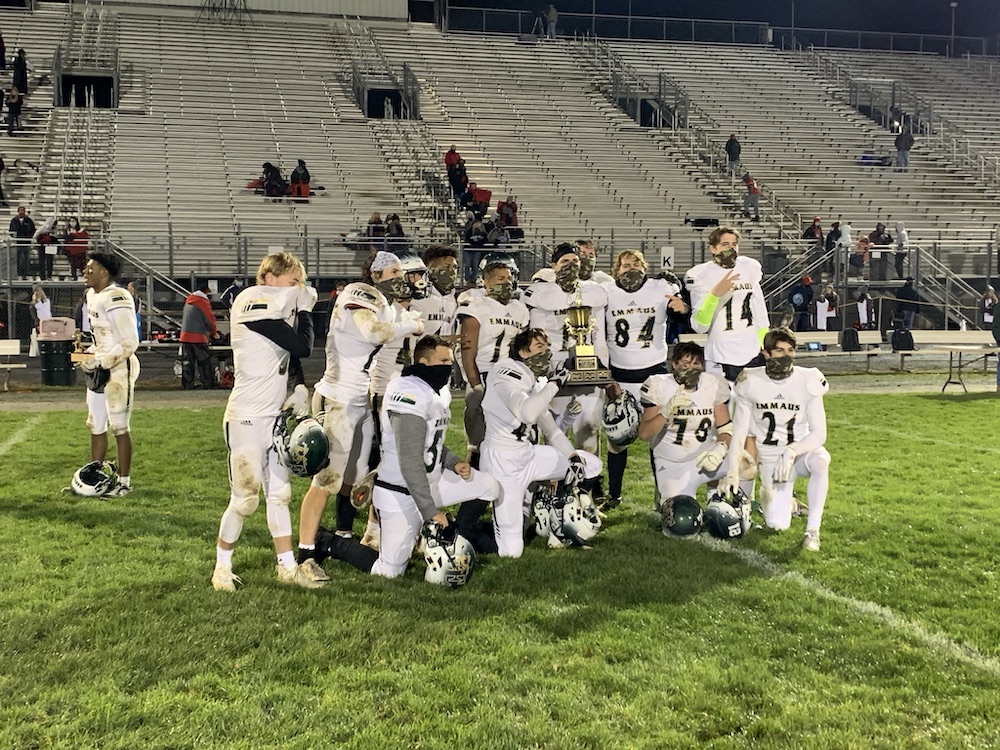 It was the battle of the unbeatens Friday night as Emmaus traveled down the road to take on Parkland. Finishing the season undefeated wasn’t the only prize up for grabs. The battle of Cedar Crest Boulevard trophy was also up for the taking. While that trophy has spent the last year in Parkland Coach Tim Moncman’s office, Harold Fairclough and the Hornets were looking to take it back.

The first quarter was all about defensive and special teams. Emmaus got the ball first and picked up a couple first downs. Eventually the drive would stall and they had to punt. Parkland did not find any success on their opening possession. Late in the first quarter Emmaus started to find momentum as they drove down the field to the nine-yard line and set up a goal to go situation. The first quarter ended 0-0. Emmaus had a field goal attempt to start quarter two.

Alex Orlando connected on his 26-yard field goal attempt. The visiting Hornets took a 3-0 lead in the opening seconds of the second quarter. Emmaus’ defense continued to frustrate the Parkland offense. The Hornets got the ball back mid-second quarter with a chance to extend their lead.

Parkland’s defense, in need of a stop, forced a turnover. Emmaus QB Jake Fotta’s pass was tipped and picked off. The Trojans returned it to the 17-yard line and set their offense up in the red zone. Explosive running back, Isiah Rico, just needed one play to find the end zone and make it 6-3 Parkland. The point after was unsuccessful, and it kept the Hornet’s deficit at only a field goal.

Emmaus came out and quickly turned the momentum back in favor of Emmaus as Fotta connected with Aiden Dougherty for a 69 yard touchdown. Parkland, now trailing 10-6 with under 3 minutes left in the first half, was hoping to put points on the board. The Hornets’ defense, however, kept the score 10-6. This gave their offense a chance at more points before halftime. Emmaus would drove down the field to the eight-yard line where their drive ended. Orlando came out for his second field goal of the night. He converted to make it 13-6 Emmaus at the half.

In the second half, both defenses continued to play well. Emmaus’ defense came close to intercepting Parkland QB Ty Tremba, but Trevor Gitski couldn’t hang onto the ball. That incomplete pass forced a punt, but the Hornets might have had an opportunity for a pick six had Gitski held on.

In the fourth quarter both defenses kept the second half shutout going as no offense could find a successful drive. With 4:28 left in regulation, Parkland had first and goal at the Emmaus three-yard line. They gave it to Rico and were stopped. On second and goal from the two, Tremba handed to Rico again and Hornets d-line stopped Rico again. On third and goal from the two, Rico was fed the football again and the result stayed the same. Now fourth and goal from the one yard line with under three minutes to play, Tremba fed Rico for the fourth play in a row.

Emmaus’ defense was not fooled. The Hornets took over on downs. This defensive stand brought back a lot of memories to 2016 when Emmaus stopped Parkland at the one-yard line on fourth and goal in double OT to win the division.

Emmaus went three and out. Parkland had one last chance with 1:50 to play to try and tie the game. Parkland got to the Emmaus 30 yard line and were faced with a fourth and three. With 1:19 on the clock, Tremba got the snap, looked to find Jordan Lewis in the endzone, but Jameel Sanders broke the pass up. Emmaus took over on downs for the win.

Fotta and the Hornets came out in victory formation. All it took were two kneel-downs. Emmaus celebrated a lot of achievements after the game. They finished the regular season undefeated, took back the Battle Of Cedar Crest trophy, and had their first win at Parkland’s stadium since 2011. The Hornets, like many other teams, will be eager to see the seeding for district playoffs as well as their first opponent.