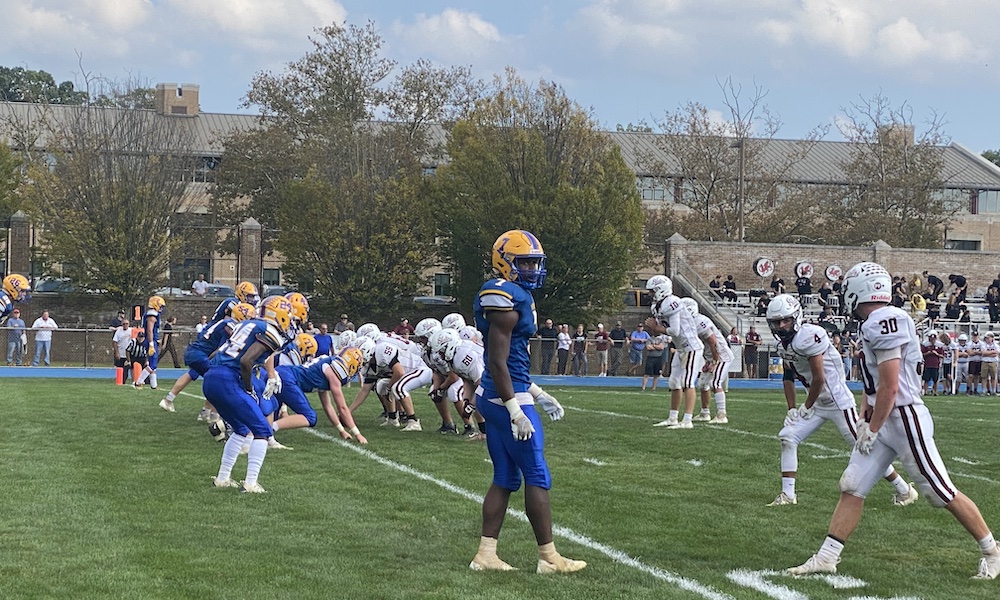 EASTON – Early in the game, tied at six, the Slaters ripped off 31 unanswered points in a 37-6 win over Wilson Area Saturday afternoon at Smith Field. Eric Striba had a great day, rushing for 183 yards and scoring four touchdowns.

“It goes back to the off-season. We didn’t block well last year and we struggled upfront,” said Bangor Head Coach Paul Reduzzi. “Coaches Sui and Andrews put in a new scheme this year and it has been unbelievable. The kids have worked hard to get better and it shows.”

The opening drive was the Striba and Kael Godshalk show. They combined for 65 yards rushing on 11 plays capped off by Striba’s one-yard score. The two-point conversion was no good and Bangor led 6-0.

The Warriors answered right back to tie the game up at 6. It took seven plays for Wilson’s Damian Simpson to score from 4-yards out.

At the start of the second quarter, the Slaters had the ball on the Wilson 36yard line. Striba hit Gabe Woolverton for an 18-yard completion down to the 18. Two plays later, Striba finished off the drive with a 13-yard touchdown run. The two-point conversion was good to Woolverton and the Slaters led 14-6.

The Warriors’ next drive ended with a punt deep in their territory. The punt was blocked and recovered by Jacob Weaver for a safety to extend the Slater’s lead to 16-6.

Striba’s third touchdown run of the day pushed Bangor’s lead to 24-6 with 2:59 left in the half.

The Bangor’s defense started to make some noise late in the first half. Wilson next drive ended on an interception by Slaters’ Derrick Zamorsky.

In the third quarter, Wilson got the ball first at their 29. The Slater’s defense came up with another big stop. Weaver sacked Cayden Stem forcing a punt.

After back-to-back fumbles by both teams, the Slaters got their offense going in the second half. They went 63 yards on six plays as Striba went in for his fourth touchdown run of the game. They led 30-6 with 4:52 left in the game.

“Striba is a student of the game and led them in the weight room in the off-season,” said Reduzzi. “He really worked hard to get stronger and better. He is an exceptional kid on and off the field.”

The Slater’s defense wasn’t done. MJ Sui intercepted a pass ending a Warriors drive. Bangor couldn’t capitalize on the interception turning the ball over on downs.

The Warriors were on the march driving to Bangor’s 18. But, the Slater’s defense came up again with a big play. Weaver almost got another sack but caused an errant pass which led to a Landon Uhler interception.

Bangor’s Godshalk scored from one yard out and the big chunk of the drive was a Striba 62-yard run. Gabe Woolverton’s kick made it 37-6.

“He’s only a sophomore and has done a great job this year,” said Reduzzi. “He’s getting better each game.”