Moravian Gets The Win Against Palisades, 54-45 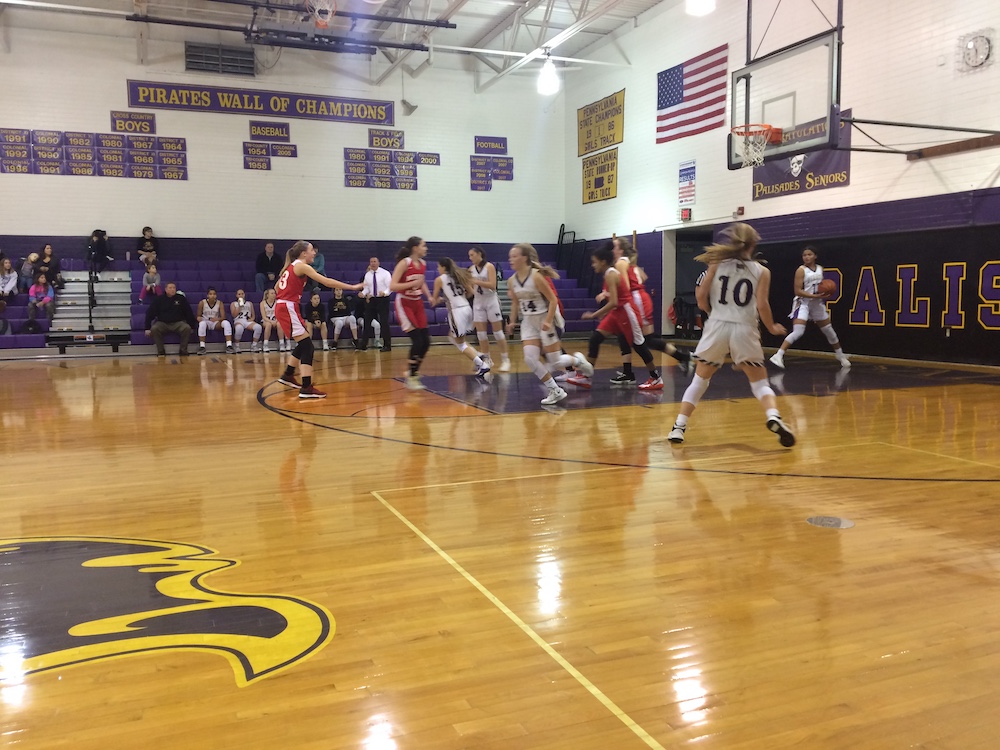 Moravian started with the ball and made their move early, scoring the first two baskets of the game. Alayna Stianson for Palisades made their first basket of the night, making the score 4-2. Off of a rebound, Sydney Odle made a basket to tie the game up at four a piece. With 3:40 left in the first quarter, Moravian hit a three-pointer. They then intercepted the ball again. Moravian got a free throw, making the first, but missing the second. They kept the game rolling by adding another basket to make the score 14-4. Trinity Williams for Palisades came out of nowhere to make the score 14-6. To end the quarter, with just 15 seconds left, Moravian made a basket to make it 16-6.

The Pirates started with the ball this time. They took this opportunity to make the first basket of the quarter. But the cheers didn’t last long as Moravian quickly mad another, bringing the score up to 18-8. Moravian continued their groove until the score was 22-8 with six minutes left in the half. Palisades came up with a basket, credited to Odle. After another basket from Moravian, a time out was called with 5:40 left on the clock.

Williams came up with another basket, making the score 24-12. With 4:41 left in the half, Moravian got a free throw. They missed the first, but made the second, widening their gap even more. Palisades got two more free throws, adding two points to their tally. The two teams scored back and forth until the score was 32-18 with the lead still going to Moravian. After a failed basket attempt from Odle, Williams came up with the rebound to score. She then led the team with a free throw attempt, making one. At the end of the half, the score was 32-21 Moravian.

Moravian started with the ball, but the Pirates ended up getting the first basket of the night. Williams added a failed basket attempt, but then a basket on the rebound. To stop Palisades’ momentum, Moravian made two more baskets. They added a three-pointer a few moments later and made the score 37-25. A time out was called and when the game got rolling again, Odle made a basket with 3:45 left in the quarter. The teams went back and forth again, keeping up that fast pace, and keeping the score at a ten point lead, 39-29. Another time out was called with three minutes left in the quarter. Moravian added two more baskets to make the score 43-29. Williams, for Palisades, got another free throw, making the first, but missing the second. She recovered quickly and added another basket to Palisades’ total. Alayna Stianson was quiet since the first quarter but got two free throws, missing both. The quarter ended at 43-32 Moravian.

Though Palisades knew they were crushed for time, they allowed another three-pointer from Moravian. Williams stole the show by first making a basket and then a three-pointer to help Palisades. With the score at 46-37, Moravian shot two more baskets, increasing that lead. Williams and Moravian went back and forth making baskets, until Moravian made two free throws. With 2:52 left in the game, Moravian made a basket and another with two minutes left. Palisades added two more baskets to their total, making the score 58-43. Williams, on the rebound made a basket. The score was now 58-45.

After two missed free throws for Moravian, the clock wound down and lefe Moravian with the win, though it was an excellent game for both teams. The final score was 58-45. Palisades heads to Northern Lehigh on Thursday.