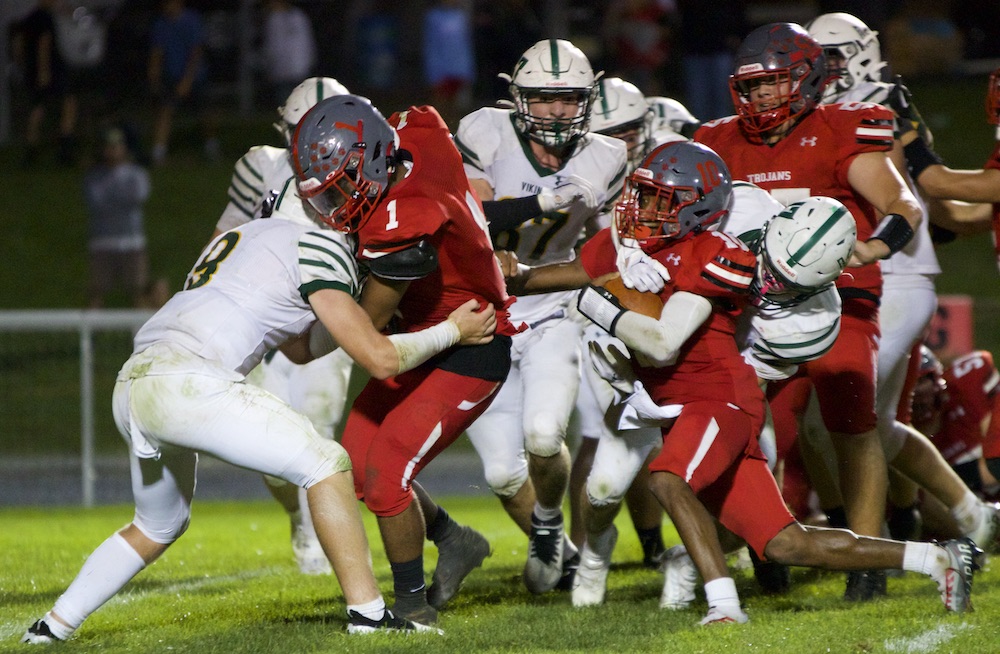 The duo was on hand one more time together at Parkland School District Stadium to honor the 2002 team. Melosky now works on the Central Catholic staff, working with the offensive line.

“On the first play of the game when Austin broke it, it set the tone of the game,” said Melosky. “The entire season had so many great memories and to win a state title was special.”

Friday night we got to see another running back showcase his talent. Central Catholic’s Caiden Shaffer scored two touchdowns to lead the Vikings to a 21-14 win over Parkland in the EPC South Division game.

It was the Trojans who made a statement right out of the gate. Parkland drove 75 yards on five plays. Freshman running back, Marquez Wimberly, went in from 12 yards out. Gryffin Mitstifer’s kick was good and Parkland led 7-0 with 9:19 left in the first quarter.

The Vikings overcame a turnover deep in Trojans territory and finally got on the scoreboard. The offensive line set the tone, especially running behind Raheem Battles and Fynn McDonalds. The big play that set up the score was a 29-yard run by Shaffer down to the Trojans’ one. Three plays later, he capped off the drive with a one-yard touchdown run. Tamlin Ferguson’s kick was good and we were tied at seven with 7:07 left in the first half.

The Vikings’ defense got a key interception by Ethan Hosek. They took over on Parkland’s 20. The Vikings drove down to Parkland’s four-yard line facing a fourth down and one. They converted the fourth down and Shaffer got his second touchdown run of the quarter. This time it was from two yards out with 2:52 remaining in the first half. They led 14-7. Shaffer finished the night rushing for 123 yards on 23 carries and two touchdowns.

“You know what you are going to get with Caiden every night,” said Vikings Head Coach Tim McGorry. “He is tough and not afraid of contact. He gets stronger as the game goes.” The Vikings’ Braheem Battles intercepted a pass late in the first half. But, the Trojans’ defense held and stopped the Central Catholic offense deep in their territory. At halftime, the lead belonged to the Vikings14-7.

Coming out of halftime, the Vikings went up two touchdowns with 6:53 left in the third quarter. Nathan Schultz got the handoff and broke several tackles en route to an 11-yard touchdown run. The score was now 21-7 Vikings.

Parkland had some key players out Friday night, including their starting quarterback Luke Spang. Nakhi Bullock stepped in and played quarterback for the Trojans. Late in the fourth quarter, Bullock weaved his way through the Vikings’ defense for a nine-yard score. The Trojans cut into Central Catholic’s lead 21-14.

Parkland seemed to have all the momentum late in the fourth quarter. The Trojans were facing a third down and 19 but converted the play when Bullock hit Trey Tremble for the first down on 40. Bullock used his arm and legs making play after play during the drive. Bullock slightly underthrew the ball and Jake Parker made the needed adjustment, catching the 28-yard pass with 2:22 left in the game down to the Vikings two. Bullock tried to hit a receiver deep in the end zone, but a penalty on the Vikings’ defense moved the ball to the one with 2:18 remaining.

It looked like Bullock was going in for the game-tying touchdown with 2:12 left in the game. But a hard hit jarred the ball loose and Rajan Stevens recovered the ball in the end zone for the Vikings to persevere the win.

“I thought we played well three and half quarters of the game,” said McGorry. “We had mental mistakes and penalties that crept in. We made it a lot harder on ourselves than it needed to be.”

Next week Central Catholic (3-1) is home against Freedom and Parkland (2-2) travels to Whitehall. 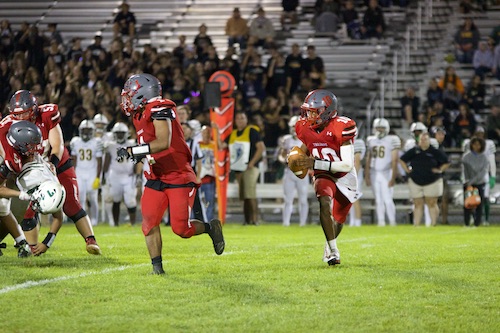 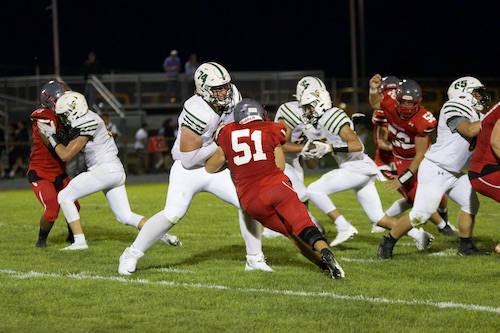 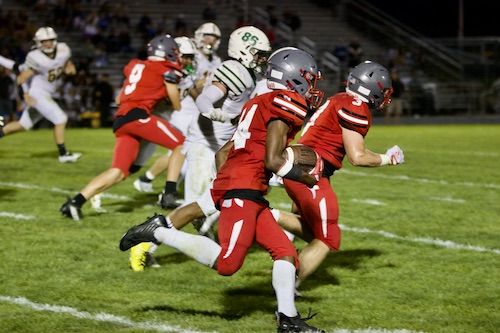 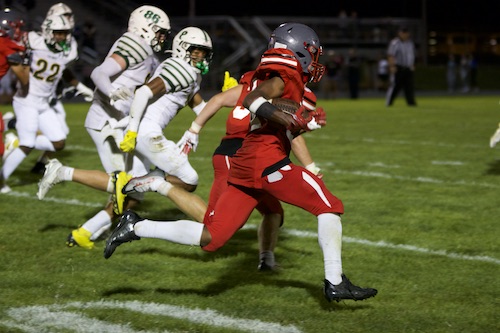 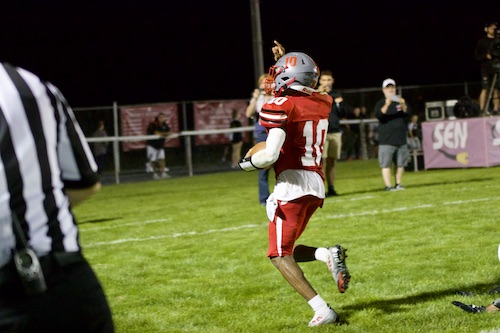