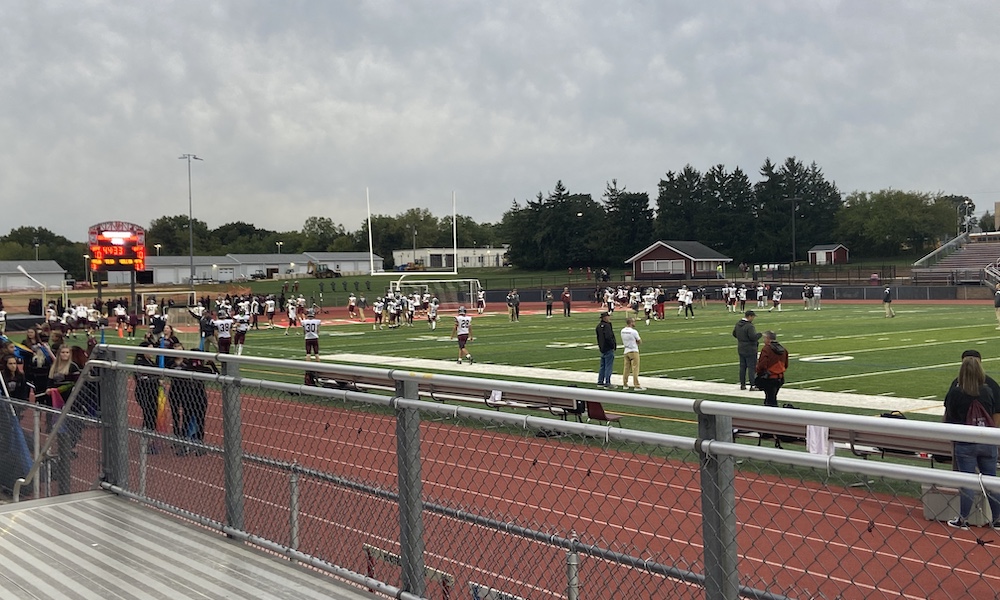 The game started off slow with a score of 0-0 after the first quarter. Both teams were playing great defense.

At the end of the second quarter, a touchdown by running back Xavier Moore and an extra point by Luke Brogan put Phillipsburg on the board 7-0. The first half ended with Hunterdon Central scoreless.

To start the second half, Phillipsburg kicked off. But, a forced fumble by Patrick Day and a recovery by Hunter Cleaver gave them the ball back. This gave P’burg the motivation that lasted the whole game.

Phillipsburg marched down the field and Sophomore Quarterback Jett Genovese passed to Sophomore Wide Receiver Matthew Scerbo who scored a touchdown to make the score P’burg 14 – Hunterdon Central 0 with 8:03 left in the third.

Hunterdon Central could not finish in the end zone because of Phillipsburg’s tough and gritty defense which has been in place for a very long time. With 1:39 left in the third, Jett Genovese threw a touchdown to Matthew Screbo for the second time in the game. The score was 21-0 P’burg.

Shortly after Hunterdon Central ended the third quarter with a receiving TD to make the score 21-7 at the start of the fourth quarter.

P’burg has shown this season that they are a powerhouse of a team in New Jersey. Their phenomenal defense and offense is tough to beat. Quarterback Jett Genovese and Wide Receiver Matthew Scerbo have a ton of chemistry together already, and they are only sophomores. I can not wait to see them grow to even greater players. The great defensive effort from players like Patrick Day, John Wargo, Caleb Rivera, and Cameron Bohal with his two interceptions helped P’burg get the win. Phillipsburg is ready to keep winning.