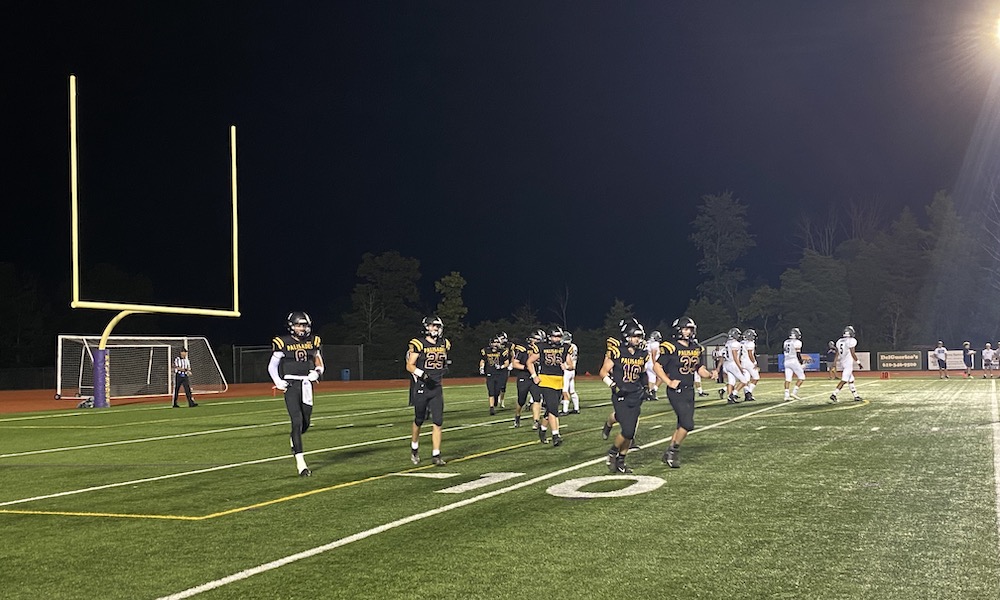 Friday evening felt like fall for the first time and was a beautiful night for some football. Walter T. Rohrer Stadium was packed because not only was it Youth Night, Palisades had a great matchup against Northern Lehigh. Both teams were on the field practicing early as evening hit and changed the sky into sunset colors.

I was able to talk to both head coaches before the game and they had some interesting insight to share. Coach Joe Tout for Northern Lehigh spoke about how their team is more than just about their best players and that in order to win it needed to be a team effort. He also noted his key players to watch for Palisades were quarterback Jaden Newton and wide receiver Kyle McGrath.

On the flip side, Coach Ramie Moussa for Palisades was fired up and only spoke about his own team. He stated that they would have to try to give McGrath the ball whenever they could, fully aware that the Bulldogs would be giving him extra coverage. Additionally, he spoke out about how the outcome of this game was crucial to show how the team is playing at this point of the season.

The Pirates’ Michael Wallbillich kicked off the football to start the game. Northern Lehigh was able to take control right away by driving down the field and utilizing passes effectively. At 5:41 left in the first quarter, Bulldog quarterback Dylan Smoyer snuck in the one-yard touchdown. Brett Misera’s extra point attempt was good and Northern Lehigh led 7-0.

Palisades started their drive at the 33-yard line and tried to move the ball downfield with sophomore Steven Lilly. However, they couldn’t make any progress and ended up punting the ball to the 17-yard line. The Bulldogs ended up scoring almost right away at the 3:25 mark with a pass from Smoyer to Nick Frame for the 78-yard touchdown. The extra point was wide left and so the score remained 13-0 to end the first quarter.

The Bulldogs remained in control into the second quarter with another touchdown early on. It was Northern Lehigh wide receiver Trevor Amorim with the two-yard carry and the extra point was executed to increase their lead to 20-0.

Though the Pirates’ student section was doing their best to pump up the team, their efforts were no good. The Bulldogs wouldn’t let up and running back Iziaih Ramos scored a 28-yard touchdown. Palisades used their timeout before Northern Lehigh’s two-point conversion attempt, but it was to no avail and Smoyer’s throw to Misera was completed. The score was 28-0 going into halftime.

The Pirates seemed to have more energy coming out of the locker room and their offense stepped up. Their touchdown attempt, however, was no good and went sailing out of bounds. Northern Lehigh put on the pressure next and Amorim was given plenty of space to score his second touchdown of the night with a 70-yard run. Though the extra-point attempt hit the upright, it fell in and put the mercy rule into effect. With the clock now running, the Bulldogs were up 35-0.

That was the last of the scoring for the Bulldogs, but the Pirates were not ready to be shutout. McGrath was wide open with 5:28 left in the game and cruised into the end zone for the Palisades touchdown. Wallbillich’s extra-point was on target and was the last scoring of the game. Northern Lehigh won this one, 35-7.

Both teams are away next week. The Bulldogs are at North Schuylkill while the Pirates take on Salisbury. Northern Lehigh increased their record to 3-2 overall and Palisades fell to 1-4.