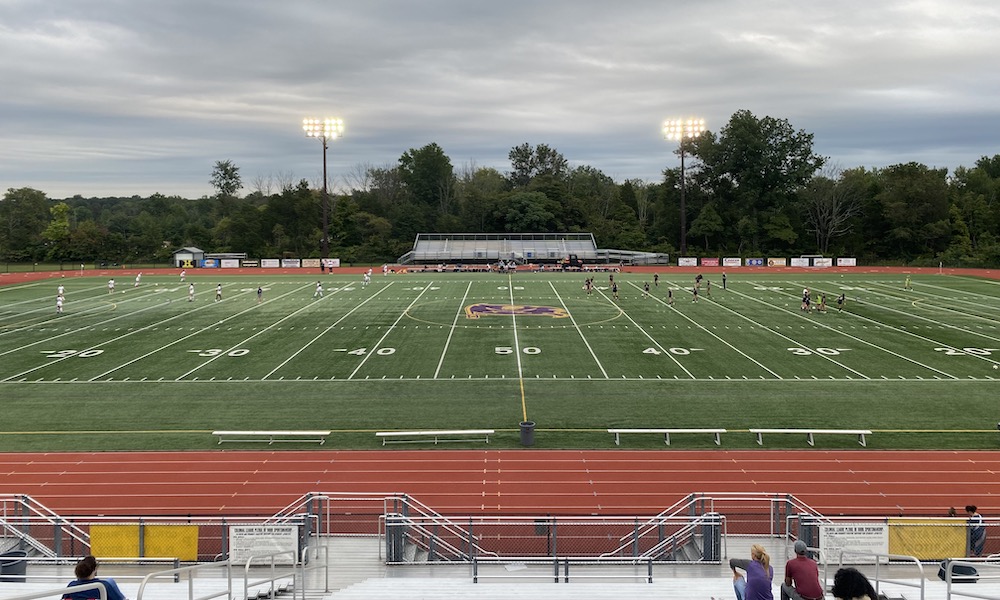 Thursday night was a perfect night for a soccer game. Palisades girls soccer faced the Salisbury Falcons at home. Both teams were coming off of a loss. The Pirates lost against Northern Lehigh on Tuesday, 2-0, and the Falcons could not keep up with Palmerton losing 9-0 also on Tuesday.

I talked with both coaches ahead of the game and learned some interesting insight about each team’s plan of attack. The head coach of Salisbury, Coach Babyak, said their goals were to be competitive and just play their game. He considered his team to be strong and highlighted Senior Quinn Wittman who he claims has one of the “best shots in the Lehigh Valley.” Wittman was playing midfield instead of goalie because of a slight shoulder injury, but she is strong physically and is definitely a player to watch for Palisades.

I also spoke with the head coach of Palisades, Coach Houghton, before the game. He was optimistic and stated that he was focused on what his team could do rather than the other side. He noted that this was an essential game to rebound their season by utilizing both older and younger players. Aubrey Boushell was in the goal for Palisades and gaining valuable experience in spite of being a sophomore. Additionally Coach Houghton highlighted Kylie Schmidt who in his words is “hungry for goals,” and is a part of the team’s trio of incredibly fast players: Schmidt, Jenna Magditch, and Holly Pason.

The action started off quick and Palisades was in control from the start. Not even 30 seconds into play, Sophomore Holly Pason fired the ball into the back of the net to give the Pirates the lead, 1-0. The Pirates didn’t let up and continued to be on the offensive for almost ten more minutes before Salisbury was able to take back some control of the game. However, there was no action from either side until Schmidt launched one through the Falcon goalie, Alexandra Miller’s, hands. This was a big goal for Palisades to extend their lead to 2-0 and a wake-up call for Salisbury. The Falcons answered by weaving through the Pirates’ tough defense with Hannah Kamp scoring the goal and Wittman with the assist. The first half of play ended with Palisades leading 2-1.

The scoring continued in the second half with the Pirates leading the charge. Schmidt scored her second goal of the night in the 50th minute of play. The Balsamo sisters continued the push and Grace Balsamo scored Palisades’ fourth goal with Brooke Balsamo getting the assist. Salisbury returned the favor with a goal of their own with 16:20 left to play. It was Senior Falcon Chase Watto with the goal and Wittman with the assist. That was the end for Falcon scoring, but the Pirates were not quite done. Pason added an insurance goal with her second of the night with 7:49 left on the clock making it 5-2. Finally, with less than a minute to play, Pason found an opportunity to score again. The clock wound down and the Pirates took this one, winning 6-2.

It was a great game played by both teams, but Palisades was better offensively and held the pace the entire way. The Pirates are able to improve their record to 4-2 while the Falcons record is now 2-4. Salisbury’s next match is home against Blue Mountain on Saturday while Palisades is away against Moravian Academy on Monday