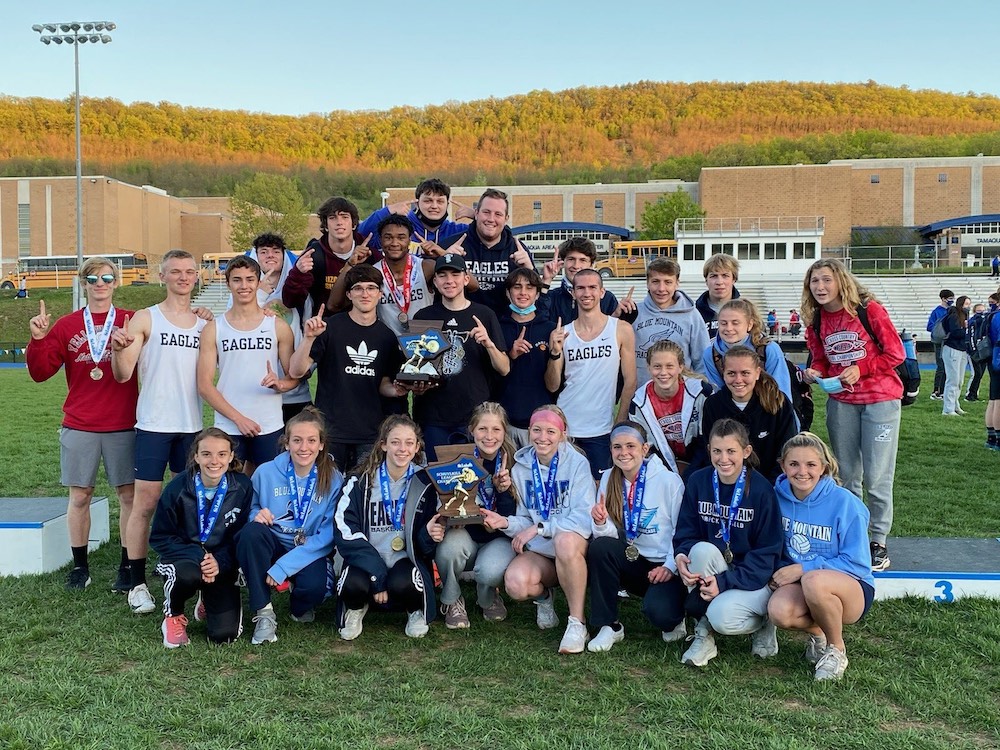 There was rain. There was wind. There were final throws that determined victories. There were team races that came down to the final event and there were rivalries in full effect. In a span of 48 hours, the high intensity Schuylkill League track and field championships came and went, but not without some crazy storylines coming out of them.

McCormick v. Haas
North Schuylkill’s Cori McCormick and Blue Mountain’s Olivia Haas have run against each other more times than they could probably count, but every time they do, the eyes of everyone in the crowd are watching. After a crazy cross country season, the two distance runners were poised to compete for league titles in the 1600m and 3200m runs. On Tuesday, the two stood side by side for the first seven laps around Tamaqua’s bright blue track, but eventually Haas’ final kick propelled her to a victory in less than five minutes, a meet record. The two weren’t done just yet though, as they came back Wednesday in the mile, where again Haas pulled away near the end of the race to secure her second gold medal individually. McCormick still found some gold herself, winning the girls 800m on Wednesday, setting a meet record, as well as anchoring the North Schuylkill girls’ 3200m relay team. The two love running with each other though as they both pace each other and force each other to compete and secure great times.

Lehighton’s Meckes Dominates the Throws
Not often do you see a thrower compete in the javelin, discus, and shot put, let alone win the league gold in all three. Lehighton’s Abigail Meckes did just that, winning the discus on day one and javelin and shot put on day two. Her 113 foot 11 inch throw in the discus competition secured her gold medal. The javelin competition did not come as easy though, as she trailed Blue Mountain’s Rosa Gergely heading into the final throw of the competition, where she threw a personal best 124’ 7’ to take the gold. Only having a few minutes in between events, she went straight to shot put and clinched her third victory with a throw of 34’.

Marian Sprinters Dominate the Sprints
Marian’s sprinters did not let the bigger schools intimidate whatsoever, as they took gold in the 400m relay, 1600m relay, and added top two placements in the 100m and 200m competitions. Michael Fellin captured the first victory by winning the 100m dash in 11.1 seconds over teammate Jacob Fenstermaker and a loaded heat. Fellin and Fenstermaker, joined by teammates Johnny Malarkey and Ean Chelak then won the boys 4 by 100 meter relay no more than thirty minutes later. Fellin and Chelak then took 1-2 in the 200m dash toward the end of the meet. The same quartet struck gold in the 1600m relay in the final event of the meet.

Jumpers’ Madness
Six different athletes captured gold in the boys and girls jumping events over the course of both days. On Tuesday, Jim Thorpe’s David Richards captured the boys high jump. Pine Grove’s Josh Leininger won the boys long jump, and North Schuylkill’s Sarah Wagner took the girls long jump. Day two featured victories by North Schuylkill’s Terry Thomas in the boys triple jump, Minersville’s Devin Hubler in the girls triple jump, and Pottsville’s Payton Kleckner in the girls high jump. In the process, Kleckner broke the league and meet record with a jump of 5’ 6’’ on her way to win the gold.

Flynn and Williams Sweep the Distance Events
North Schuylkill’s Jack Flynn and Justin Williams did not leave a doubt during the three distance events, as Williams took victories in the 800m and 3200m, while Flynn was victorious in the 1600m. The two did not let a loaded distance field get in their head, as they both ran very solid times in their respective events and added more victories to their team total.

Down to the Wire
The Schuylkill League championship trophies were sitting next to the track waiting for a new home during the second day of competition. Coming out of day one, Blue Mountain led a tight boys race, while North Schuylkill led the girls competition. As events flew by on day two, coaches were frantically calculating possible outcomes down the stretch. It all came down to the final event, the girls and boys 4 by 400m relay. Going into the girls finale, Blue Mountain, North Schuylkill, and Lehighton were neck and neck in points and placement was a huge factor in the outcome. Jim Thorpe took an early lead and held it until the final lap until Blue Mountain’s Olivia Haas took the baton.

She rode along in second place until the final 150m, where she made a move to capture the relay victory and overall team victory. After the track cleared, the boys team race was in a similar situation. Blue Mountain had a four-point cushion going into the last race of the entire meet. After the first two laps were complete, North Schuylkill and Jim Thorpe were in first and second place. Blue Mountain was back in fifth praying for a miracle. By the time Marian’s Ean Chelak and Nativity’s Marcus Vaupel took the baton though, the two Catholic schools overtook first and second place and held it until the end with Jim Thorpe, North Schuylkill, and Blue Mountain placing 3, 4, 5. This order of placement meant that Blue Mountain had captured the boys team title by a slight two points. Every single point mattered for every team within the whole meet. It was fitting in a year of uncertainty that the team race came down to the final event. A huge moment for Blue Mountain boys’ victory came when the pole vaulters placed 1-2-4 and captured 23 points for the team. An interesting fact about their title is that Mike Levkulic’s pole vault victory was the only gold medal that the Blue Mountain boys team captured. They made up for it with scrappy efforts to sneak out second through eighth place finishes to give the team extra points. For the girls, Sophia Chipriano and Julia Kluge took second place in the 800m and 400m events respectively. Danika Bolinsky took two 4th place finishes in the 100m and 200 m dashes.