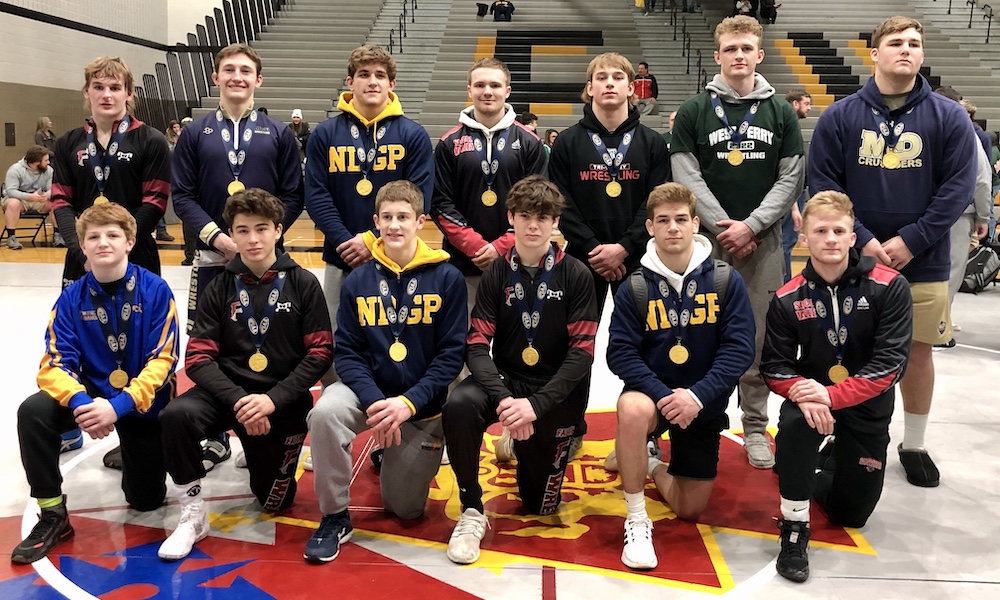 District 11 wrestlers did that and then some at the Southeast Regional Tournament. The last stop on the Road to Hershey ended with plenty of hardware and highlight reel moments.

Notre Dame Green Pond led the way with three individual champions. Adam Schweitzer (120), Brandon Chletsos (132) and Holden Garcia (160) all left with gold Saturday. It is the third regional title for Chletsos, who was second at states a year ago. It’s the second regional crown for Garcia, who was sixth at states last season. Schweitzer was a regional runner-up last year, when he placed seventh at states.

The Crusaders also claimed the team title with 216.5 points, and will be sending 11 wrestlers to states.

The Panthers were second in the team standings 181.5 points, and will send nine wrestlers to states. Jones, a runner-up a year ago, prevailed with a 6-2 decision over Notre Dame Green Pond’s Garrett Tettemer.“I’m just definitely working on different moves in neutral,” Jones said. “In the past years, I kind of relied on one move, which was probably the underhook to something. But it’s been three years now, they kind of know it’s coming, so you kind of have to get different setups for it. “I’ve pretty much just been working on different moves from neutral, and different defenses and things like that. It’s definitely helped a lot.”

Jones has evolved as a wrestler. “I think I’m becoming very solid all around,” said Jones. “ I’m definitely working on my bottom a little bit more, escaping a lot more. I remember freshman year I couldn’t get up from bottom. It was very rare. So it feels good that I’m definitely working a little bit more on it. And even on top. I used to always cut kids last year, and this year, I’m getting some turns, holding kids down and riding them.” The junior appears primed for a deep run in Hershey, where he was fourth a year ago.“I’m just going to have fun and let it fly,” said Jones. “That’s really all you can do.”

Tri-Valley’s Jacob Scheib, who won his first regional title with a 13-0 major decision over Saucon’s Ty Csencsits. Jacob’s brother, Dan Scheib, was a three-time district champion, two-time regional champ, and won a state title as a senior.  “It’s a big steppingstone in my career,” said Scheib. “I have big shoes to fill with my older brother, so that definitely gives me some confidence going into next week.

“I wouldn’t say that I put pressure on myself, but they are big shoes to fill, and I think it helps me a lot to have someone to look up to like that.”

Csencsits posted a 5-3 decision over Jacob in last week’s district final. “I knew what I had to do to win the match,” Scheib said. “I was already going to Hershey, so it was all about just having fun and winning.”

The top six wrestlers in each weight class at the SE Regional qualified for states.

Results are listed below.