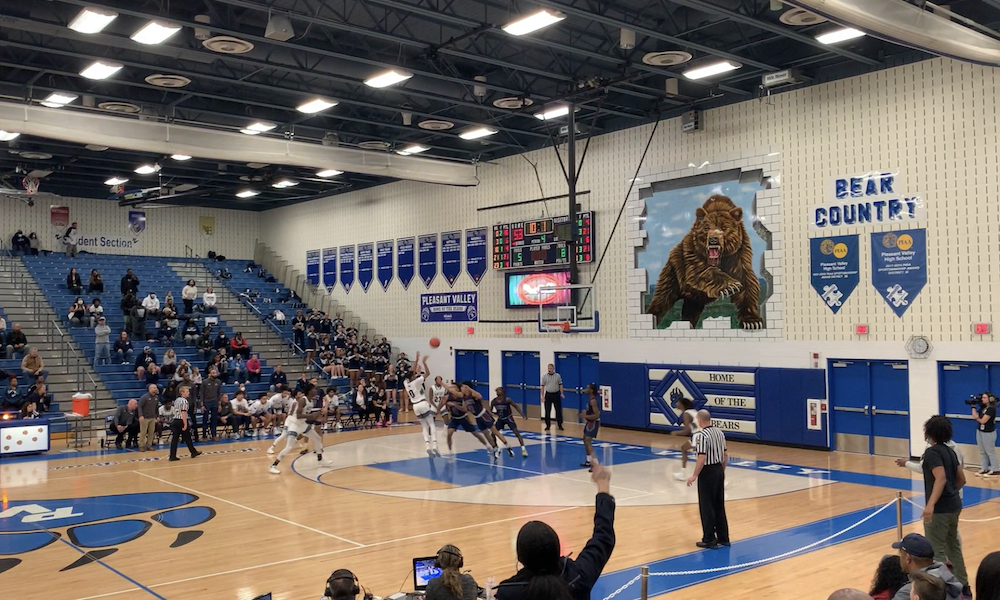 A phenomenal quarterfinal matchup in the PIAA District XI 6A boys’ basketball playoffs saw Pocono Mountain West take on Liberty. The game, hosted at a neutral-site Pleasant Valley HS, was a thriller from start to finish.

West entered the game as the number two seed, coming off a regular-season record of 17-4. Liberty, the seven seed, narrowly made the playoffs with an 11-11 regular-season record. Despite West being the favorite, Liberty hit the ground running at the beginning of the contest.

The Hurricanes looked confident from the jump ball and played fast, jumping out to an early 5-0 lead. West fought back, though, and took the lead at the end of the first quarter, 14-13.

It was certainly a game of runs, as West’s coach Rich Williams noted after the game. In the second quarter, Liberty went on an 8-0 run to go up 21-20 with 2:30 left. West regrouped and took the lead going into halftime, 25-24.

Liberty’s junior Nate Rivera started the second half hot and hit two quick threes to put his side in the lead. West responded once again, finishing the third quarter on an 8-2 run. The Panthers led 38-34 going into the final quarter.

The fourth quarter had the entire crowd on the edge of their seat. The lead changed multiple times, and the game was locked at 51 during a timeout with 1:43 left to play in the game.

Following the timeout, West scored a two, which was answered by a Kuwasi Wellington three-pointer for Liberty. The Panthers found themselves down by one during their last possession.

The ball was in the junior guard, Julian Pagan’s, possession. Pagan confidently dribbled past his defender and hit a free-throw line jumper with :08 left to play in the contest. Liberty pushed the ball down the court for one final shot, but it went long at the buzzer.

“We battled no matter what,” said Pagan. “I told this team I got them through whatever.”

Both sides played excellent team basketball, which allowed many players to make an impact on the game. West’s Christian Fermin, along with Liberty’s Joseph Barnes and Kuwasi Wellington, all tallied a game-high 21 points for their teams. Fermin spoke on his team’s win after the game.

“That was a really crazy playoff game and playoff atmosphere. Tons of fans in the gym, and it was a really hard-fought game,” said Fermin. “At the end, we came out on top.”

Fermin also spoke very highly of his guard, Pagan, who made the game-winning shot. He explained that his team will have to watch film and continue to work hard to prepare for their semi-final matchup against Northampton.

That matchup will be an interesting one to watch, as the Konkrete Kids and Panthers play different styles of basketball.