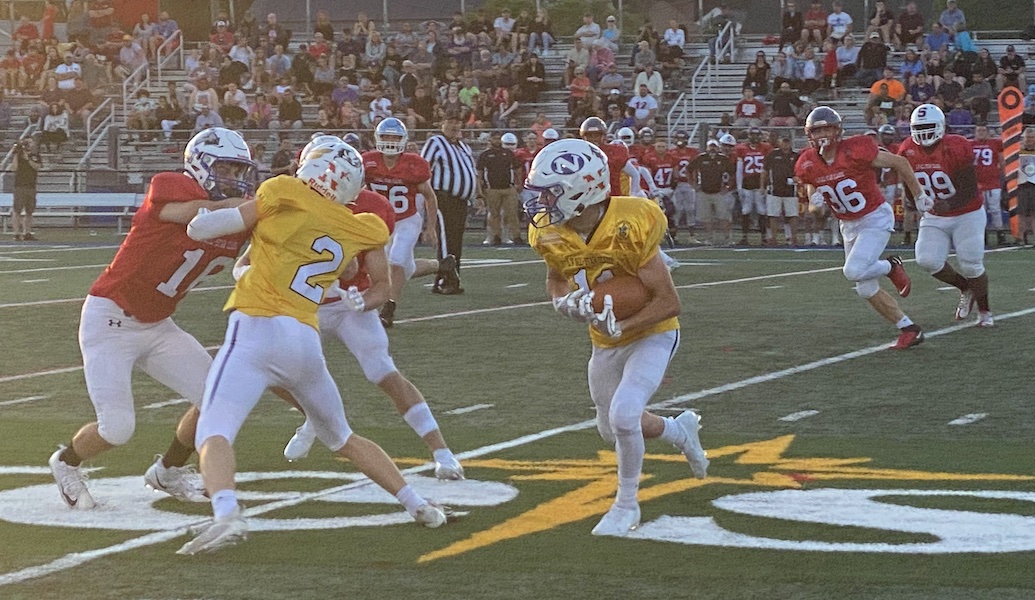 NAZARETH – For most teams in 2020, COVID-19 had an impact. One of those teams was East Stroudsburg South, who went 4-0 and out scored their opponents 248-7. The Cavaliers didn’t get a chance to play in the PIAA District 11 Class 5A playoffs, however.

This game was their second chance….

East Stroudsburg South quarterback Will Fish led the Red Team (Lehigh, Carbon and Monroe counties) throwing for 193 yards and completing 13 of 21 passes. The Red Team triumphed in a 42-24 win over the Gold Team (Northampton, Phillipsburg and Palisades players) in the 50th edition of the McDonald’s Lehigh Valley All-Star Football Classic at Nazareth’s, Andrew S. Leh Stadium. 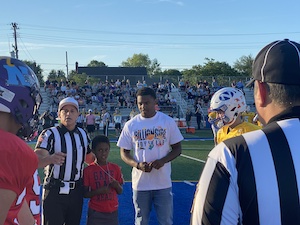 The Gold Team won the toss and went three-and-out. The Red Team got on the board first behind the hard running of Emmaus’ Brandon Camire. He plowed in from one-yard out to give the Red Team a 7-0 lead with 8:01 left in first.

Fish’s fist touchdown pass of the night was to Sapp for seven yards and a 14-0 lead. The Gold Team ended the quarter with a 27-yard field goal by Freedom’s George Ferrey.

Phillipsburg’s quarterback Matt Garatty, led the Gold Team throwing for 406 yards and three touchdowns. Two of them went to Pen Argyl’s receiver Collin McKeague. He caught four passes for 137 yards including back-to-back touchdown catches of 46 and 35 in the second quarter.

The Gold Team led for the first time 17-14 with 7:48 left in the fist half. Fish threw his second touchdown of the first half, hitting teammate Roche for a 43-yard pass. The Red Team led 21-17. That score would hold up at halftime.

It didn’t take long for the Red Team to strike again. It took two plays for Fish to hit Sapp in stride for a 27-yard touchdown pass. They added a two-yard touchdown run by Parkland’s Isaiah Rico with 6:03 left in the third and led 35-17.

In the fourth, Fish and Garatty each threw a touchdown pass. Fish hit Sapp for a nine-yard TD pass and his third touchdown catch of the night. Garatty found Nazareth’s Jaiden Cabrera from three yards out. The final score was 42 for the Red Team and 24 for the Gold Team.