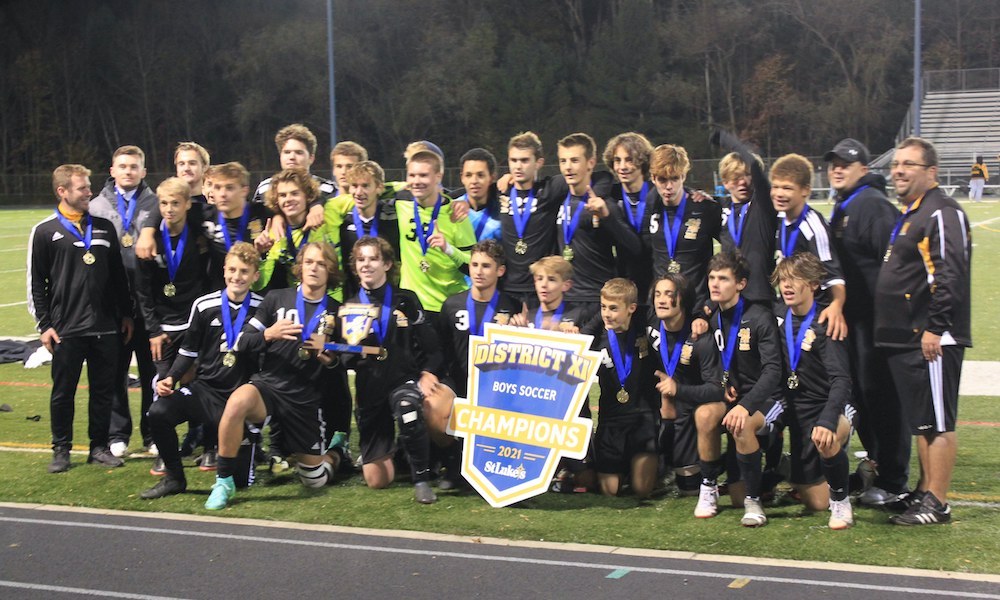 Last night at Northern Lehigh two terrific titans clashed on the soccer field, where the Southern Lehigh Spartans met the Northwestern Lehigh Tigers. Ultimately It was the Tigers who emerged victorious 3-1.

“I’m so excited for these kids. It’s been an incredible year filled with ups and downs. These guys worked their tails off and absolutely deserve this,” said Tigers Head Coach Nathan Hunsicker.

Tail puns aside, going into the game, the Spartans knew that it would be a tough one, and their plan was simple.

“Be the better team, out work them [Northwestern], be physically and mentally tough, that we allowed two goals in the first eight minutes made it a hard game to turn around,” junior Landon Bealer said.

The Spartans also had plans to try and neutralize some of Northwestern’s strengths.

“We wanted to play quick through the midfield because they [Northwestern] are strong in the midfield,” Spartans Head Coach Mark Evans said, “We were trying to man mark number seven [Josh Zellner], still with our best efforts he scored two goals.”

This is not the first time this season the two teams have met, in fact the teams have somewhat of a rivalry which goes back several years. This year in their regular season game the Spartans came out on top 2-1. The Tigers would later be victorious however, at the Colonial League Championships where they won 2-0.

“[Landon’s goal] put us back in the game,” said Spartans Coach Glueck.

With their win tonight the Tigers now advance onto the AAA State Soccer Championships. Their regional game will be played on Tuesday November 9. This loss proves particularly disappointing for the Spartans, as it is the second time in less than two weeks that they have lost to the Tigers.

“[We] worked hard to win for the seniors. I was a tough way to end the season,” junior Landon Bealer said.

While the Spartans collect their third district silver medal in as many years. Northwestern has won the last three district titles. The Tigers look forward and are analyzing the game. The Tiger’s plan for the game was defensively based with offensive striking power also playing a key role.

“Our defense came up huge this postseason. They played great! And then Matt Johnson, Josh Zellner and Colin Coffield kept our opponents on their toes leading our attack. We need to work on playing at our highest level for 80 minutes,” Tigers Head Coach Nathan Hunsicker said.

Now the Tigers look forward one game at a time while the Spartan’s seniors look back on a long career.

“I felt like our career [the team’s class of 2022 players] was great. We had many wins and want to see what the team does in the future,” said senior Aiden Tobin.

The Spartan’s made no excuses about their loss, though they still aren’t happy with the game.

“We got outplayed. The result is the result,” junior Landon Bealer said, “It was not the result we wanted in the end”