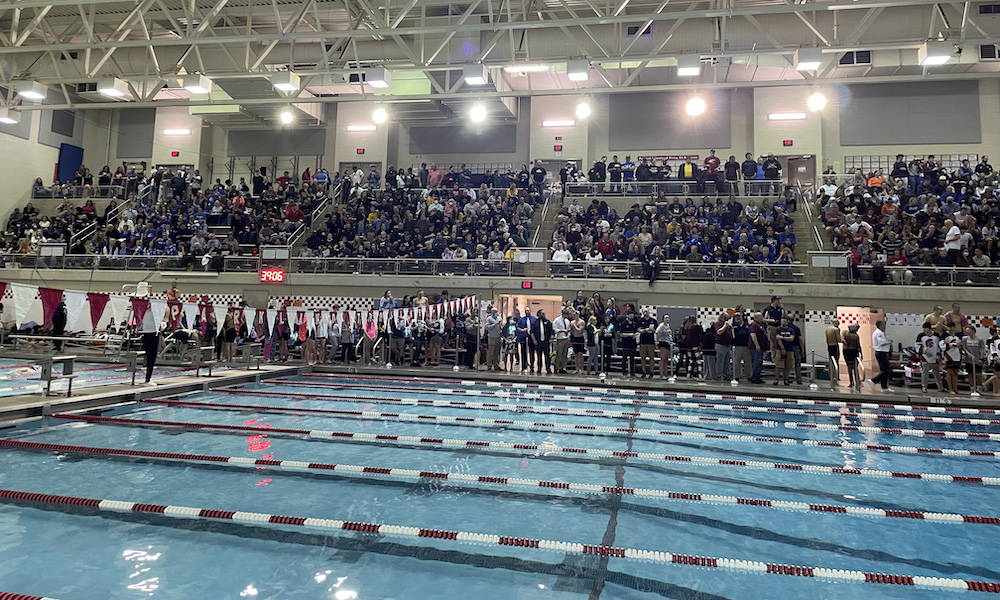 In front of a packed natatorium, the 2022 District XI Swimming Championships kicked off last night. The swimmers were loud, and the fans excited. The coaches were prepared for the biggest weekend of the season. We got a glimpse of what it was like to be at a pre-pandemic Districts and everyone enjoyed the atmosphere. Districts this year consists of the top 16 individual swimmers in each individual event and the top relay from each team. Every swimmer has worked incredibly hard over the season to get to this point and they were all excited to show off everything that they worked for.

To kickoff the meet, they started with the girls 200 medley relay, which got the crowd and athletes on their feet. This was an exciting race to watch. Emmaus placed first with a time of 1:47.30, only .41 seconds ahead of Southern Lehigh. Nazareth and Parkland followed in third and fourth. The 200 freestyle winner was Claire Weaver (Parkland, Sr.) with a time of 1:53.96 followed by Garrity Ford (Southern Lehigh, So.), Madison Camden (Southern Lehigh, Fr.), and Olivia Szerencsits (Northampton, Sr.). In the 200 IM, Chloe Vlaeminck (Emmaus, Sr.) took gold in a time of 2:07.94. Marianne Tassinari (East Stroudsburg South, Jr.) came in second, Sophia Cerimele (Parkland, So.) came in a close third and Hailey Reinhard (Emmaus, Jr.) came in fourth. Kayla Johnson (Parkland, Sr.) placed first in the 50 freestyle with a time of 22.95 breaking the pool record and district record. Johnson was followed by Brianna Wasem (Southern Lehigh, So.), Mya Puentes (Emmaus, Sr.), and Jewel Little (Stroudsburg, Jr.).

The last individual event of the night was the 100 fly, where Tori Fenn (Pocono Mountain East, Sr.) finished first in a time of 57.25, Mya Puentes finished second, Brooke Sergent (Liberty, Jr.) finished third, and Jillian Kingsley (Nazareth, Jr.) finished fourth. To finish off the night for the girls, we got to watch an impressive 200 freestyle relay race. The team that took gold was Parkland in a time of 1:38.29, Pocono Mountain East touched in a close second, Nazareth came in third, and Emmaus came in fourth.

On the boys side, as of Friday night, Emmaus is in the lead with a total of 260 points, Liberty is in second with 188 points, and Parkland is in third with 172 points. After the exciting girl’s medley relay, we continued on to watch an exciting boys medley relay. Liberty placed first with a time of 1:32.09 and broke the pool and district record. They were followed by Emmaus. Southern Lehigh finished third and Freedom took fourth.

To complete the night as a whole, we got to watch a very close 200 freestyle relay race. The team that took gold was Liberty in a time of 1:23.88 to break yet another pool record. Nazareth touched in a close second, Emmaus came in third, and Parkland came in fourth.

Friday’s session contained plenty of best times, great races, broken records, and lots of energy. This was a great kickoff to districts and we expect to see a lot more to come from these talented athletes. The excitement is back for District XI swimming and the teams will be ready to finish this meet off on Saturday with even better performances. Good luck to all the teams tomorrow at the final day of districts. 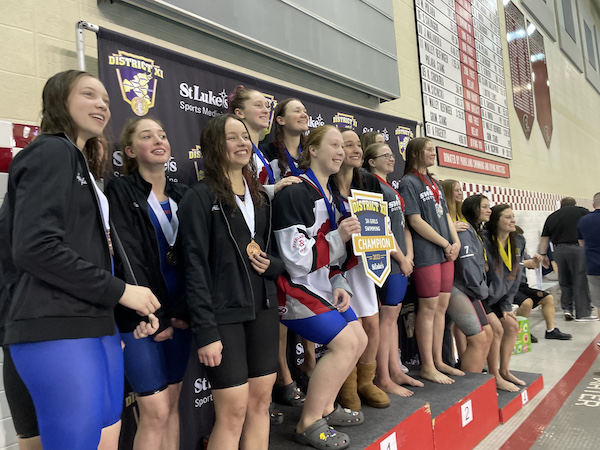 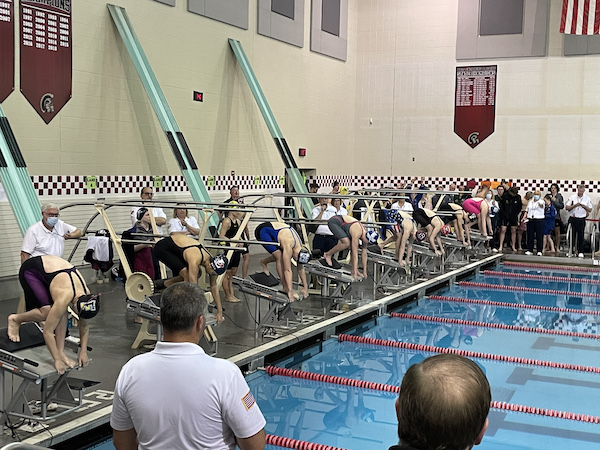 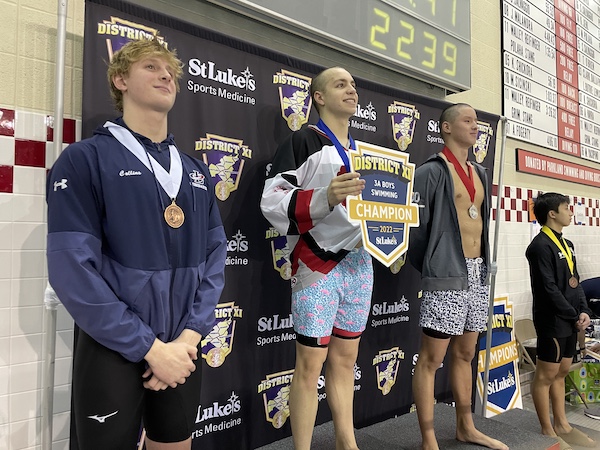 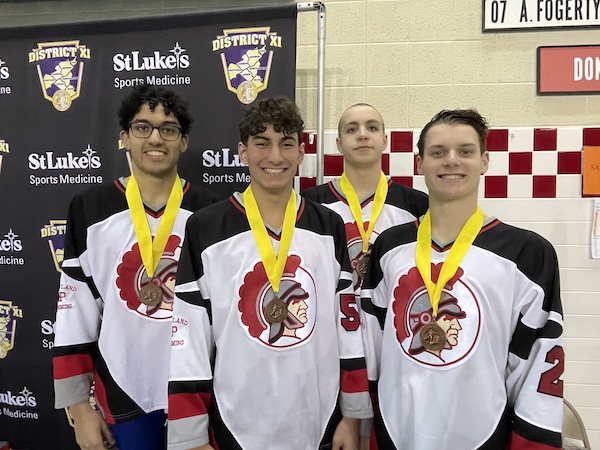 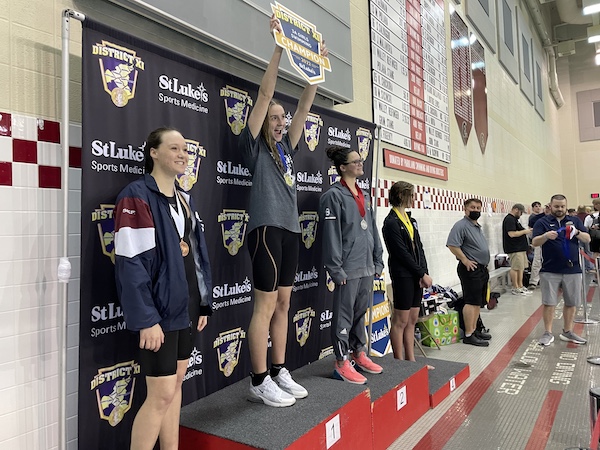 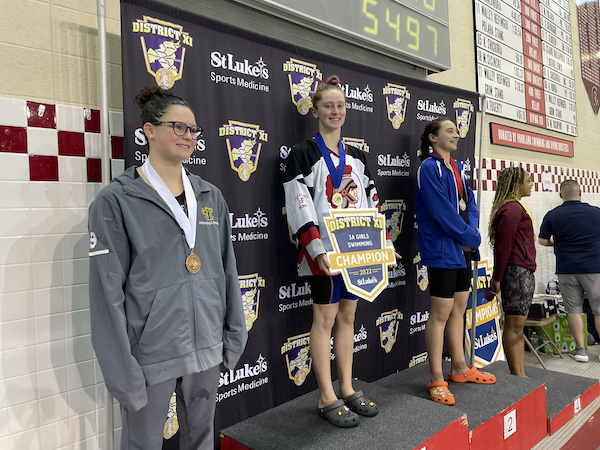 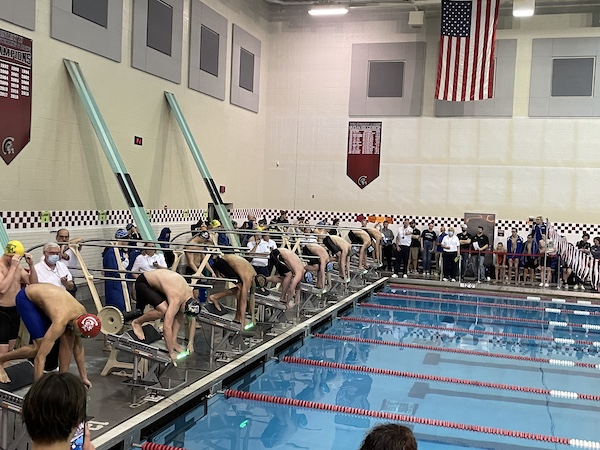 Coach Robitaille shares his thoughts on the first day of Districts and what he expects to see on the second day. @D11Sports @ParklandAthlet1 @phspoolpak @parklandtrojans pic.twitter.com/kga5GoBun6

Congratulations to two of the Parkland seniors who both broke records tonight. Kayla Johnson went a 22.95 to break the pool and the district record. Nick Zaffiro went a 1:54.14 to break the school record. Great job! @D11Sports @ParklandAthlet1 @phspoolpak @parklandtrojans pic.twitter.com/mqfjwPVzMp