A Day In The Life at the District XI Basketball Championships 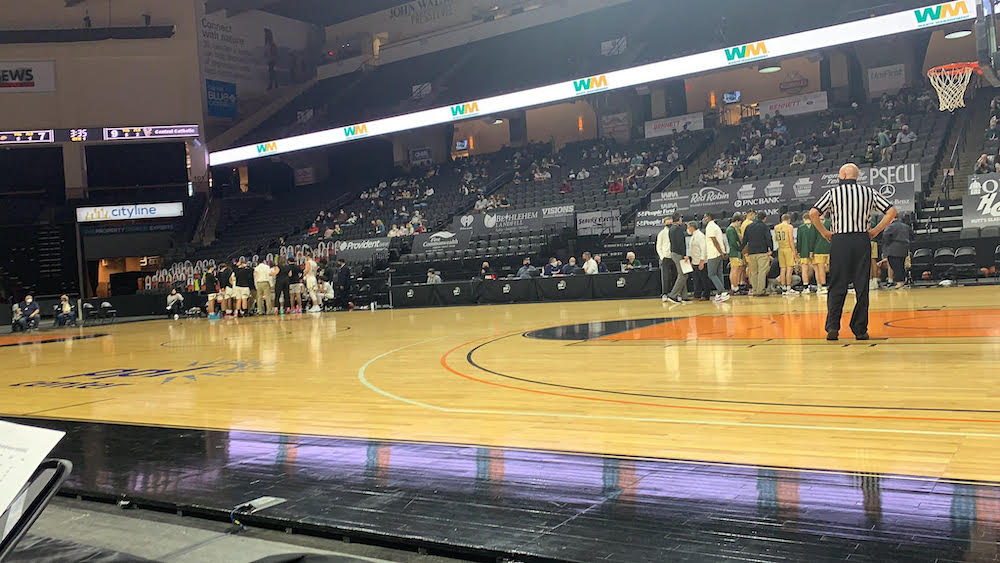 Thursday, March 11 was the day set for the District XI 4A and 6A basketball finals at the PPL Center in Allentown. Luckily, I was allowed by Blue Mountain to leave school during the day to head to the Lehigh Valley to report and cover some fantastic, hard nosed basketball for the entire day. I was very excited to see some of the powerhouse teams that kids from Schuylkill County rarely see besides on Twitter for highlights. From the Central Catholic duo of boys’ and girls’ teams, to the star studded Nazareth girls team to the nightcap between Allen and Parkland, I knew I was in for a treat.

I woke up and made my way to West Market Street in Orwigsburg to begin my shortened stay at Blue Mountain High School for the day. After my second period internship class bell rang, I was out the door and ready to make the hour trek eastward to center city. My first pit stop of the day was at Dunkin Donuts to get a cappuccino and a bacon egg and cheese sandwich in Hamburg. After I finished eating, I was all set to make the trip through the miles of construction on I-78 toward the hustle and bustle of the city. After getting off on Seventh Street and following it all the way to the arena, I found the parking garage which would house my Jeep Cherokee for the day. Immediately I knew it was going to be an interesting day when I paid the tender for parking and received a two dollar bill as change. I gave myself a few extra minutes of time, so I had to sit in my car until I could enter the arena at 11:00. As I watched some TikToks, checked Twitter in my car, and watched some of the Phantoms players exit the doors toward their cars, the arena was opening up and ready for my arrival.

I stepped into the Air Products Gate of the arena, where my temperature was checked and I went down the stairs that were straight ahead of me. Using the signs to my guide, I traversed the underground hallways to where the arena seemed to be, but found no luck. All I saw were executive offices and doors leading to closets. Finally, I found a worker next to an elevator, and after he sent me up to floor two, the doors opened and I could see the court below me. I settled myself in the specified area for media, the tables opposite the benches and made sure I had my phone, wallet, charger, and press pass. As the time ticked away on the jumbotron above, the Vikettes of Central Catholic and Lady Olympians of Jim Thorpe warmed up for their championship matchup. When Al arrived, we set up his tripod and microphone and got prepared for a pregame introduction video for the D11Sports Twitter page. In a game featured by star players, Emily Vaughan from Central Catholic, and Skyler Searfoss from Jim Thorpe, the teams warmed up before the noon tip. After a back and forth game, Emily Vaughan hit a game winning three with under thirty seconds to play to take the 4A victory. Next came the medal ceremonies. I first interviewed Coach Mike Kopp. He was ecstatic about the victory and how much it meant to the seniors and the entire team to secure the win. When that interview ended, I spoke with senior Emily Vaughan, who was very humble and thankful during the interview that her team and coach trusted her to take a long three point attempt to give the Vikettes the win.
After the interviews were done and the teams cleared out, only faint music played over the loudspeakers of the arena while the maintenance team sanitized every seat in the building. For the hour break between games, I charged my phone and grabbed some food from the concession stand before the 4A boys teams showed up. In a matchup of District XI football semifinals, top seeded Bethlehem Catholic would square off against fellow catholic school and rival Allentown Central Catholic. The game was featured by two underclassmen from each team, Edixon Gomez and Ryan Glassmacher for the Golden Hawks and Tyson Thomas and Liam Joyce for the Vikings. The star studded talent did not disappoint, as Joyce and Thomas combined for 39 of the Vikings 57 points. An ecstatic group of fans cheered on the Vikes as they received their medals and trophy. After the ceremony, I had the chance to interview head coach Dennis Csensits, who was very excited about the victory over their rival, but was eager to get back in the gym for revenge against Pope John Paull II in their state playoff game. I then spoke to Liam Joyce about his 22 point performance on the biggest stage of his career, where he said it felt surreal and such a great experience. After a wrap up report with Al, I had another break before the final two 6A games.

As the Nazareth and Parkland girls teams made their way into the arena and started to warm up, deja vu set in again as fans slowly made their way into the arena to support their respective teams. Nazareth reporters Maggie Lefebvre and Brynn Jacoby came to report for this game, so I got the pleasure to sit back courtside and watch the big school District final from the best seat in the house. As a District XI player, reporter, and overall fan, I research and hear about most teams from the District where star studded players are talked about and supported. None of these players though have had more buzz around them than Nazareth senior Talya Brugler. The St. Joseph’s commit had already set the school record for career points during the season and her highlights are nothing short of exceptional. Coming from a student whose mom played at the collegiate level at Bloomsburg in the 90’s, I was eager to see what a division one talent in girls basketball looked like in person. It took about five minutes into warmups before I knew that Brugler would be the real deal, as she warmed up with form shooting and foul shooting alone and rarely missed a shot. Fast forward to the game, and the 6’0 senior did not disappoint, scoring 16 points to lead the Blue Eagles to a 39-29 victory over Parkland. Despite being guarded by Lehigh Division MVP and Holy Cross commit Lindsay Berger, Brugler found a way to score, as all great players do. The Nazareth faithful were cheering from the home side of the stands as the team received their medals and trophy. After a few more interviews and sprays of seats, the main event was on the schedule, the 6A boys final between William Allen and Parkland.

Both Allen and Parkland had the hype up of their guard play with Allen’s Nate Ellis, and Parkland’s fantastic freshman Nick Coval. Typically when these teams would play in the East Penn Conference championships at the PPL Center, the attendance would be near a sellout. In today’s times though, with each team only being allowed a specific amount of tickets, the enormous arena was only allowed a smaller capacity. As my fellow interns Derek Moore from Allen and Joey Draper from Emmaus made their way into the arena for the 8 P.M. game, the energy throughout the arena was evident. After a pregame interview with all three of us, we were set up along press row giving predictions and thoughts of what was going to unfold in front of us. Little did we know the performance and game we were about to witness. Nate Ellis put on a show on the big stage. The Allen junior dropped 32 points out of Allen’s 54 total, and led his Canaries to a District XI title in Darnell Braswell’s first year as a head coach. In the fourth quarter, it seemed like Parkland’s game to lose, as they were in complete control and seemed to be a bucket or two away from putting the game out of reach. Ellis would have none of that though, as he scored two straight possessions to give Allen the lead. In what ended up being a 13-2 run to end the game, Allen completely took over the game and gave Darnell Braswell a memorable experience for the rest of his life.

Wow. Almost ten hours in an arena, four championship games, and two hours in the car, and my day was finally over. To any other person it would sound like way too much basketball in one day, but to me it is my comfort zone. The only thing that could have made the experience better would have been if my own Blue Mountain Eagles had made the 5A final and I would be on the floor playing instead of reporting. The entire day was a huge learning experience and was very beneficial to my experience in front of a camera.