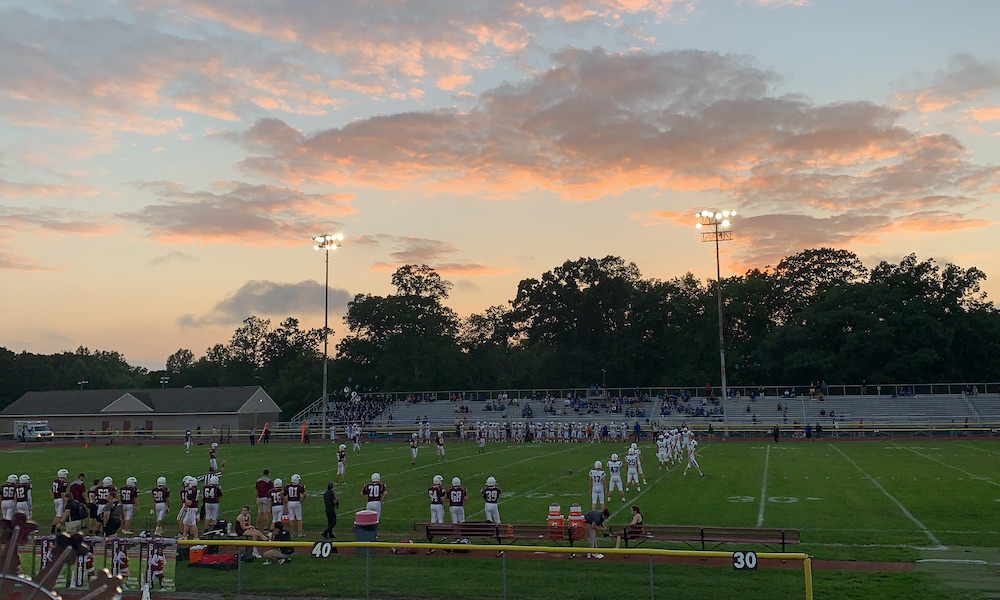 Football: The Slaters started off their week with a game at Blue Mountain on Monday, September 13th. They lost 35-27. During the week the Slaters made some adjustments at practice to win their Homecoming Game against Southern Lehigh on September 17th, 35-14. Slaters Running back and Homecoming King, Kael Godshalk had four touchdowns and Quarterback Eric Striba had one. After this win, the Slaters advance their record to 3-1. Next week Bangor takes their show on the road to battle the Northwestern Lehigh Tigers.

Field Hockey: The Bangor Slaters Field Hockey team headed out to Moravian Academy on Monday, September 13th and lost 1-0. On Wednesday they traveled to take on their rival, the Pen Argyl Green Knights. The Slaters defeated the Green Knights, 4-1. Senior Kaylee Holland, who recently broke the school record for most career goals, added two more to her record at the Pen Argyl game. Senior Alena DeRea scored the other two goals for Bangor. Friday the 17th, Bangor defeated Lehighton, 2-0. The goals were scored by Reagan Heard and Bryanna Cyphers. Saturday morning the Slaters were defeated by Southern Lehigh. On Monday September 20th, the Slaters goto Wilson to battle the Warriors.

Girls Tennis: The Bangor Girls Tennis team had six matches this week. On Monday the 13th, they traveled to Salisbury and lost 4-1. Then on Tuesday the girls were defeated by Southern Lehigh 5-0. Wednesday was the Slater’s Senior Night, and it was a good one. They defeated Notre Dame E.S. 3-2. Bangor tried to keep this momentum going but they were no match for Salisbury. The final score was 5-1 Salisbury. Friday afternoon the Slaters took a tough loss to Easton, 6-0. On Saturday the 18th, Bangor attempted to defeat Liberty on Liberty’s home courts, but they are unsuccessful. Slater’s lost 6-1. Monday September 20th, Bangor will try to conquer the Nazareth Blue Eagles at Nazareth.

Girls Soccer: The Bangor Slaters girls soccer team had two games this week. On Tuesday, September 14th, the Slaters won against the Wilson Warriors, 2-1 at home. The Slaters practiced hard on Wednesday to keep this drive going, but it was no match for the Northwestern Lehigh’s electric offense. On Monday the 20th, Bangor will attempt to beat Catasauqua at home.

Boys Soccer: The Slater’s Soccer team lost on Tuesday September 14th to the Wilson Warriors, 6-2. On Thursday, the Slaters tried to defeat the Northwestern Tigers, but were unsuccessful. The final score was 6-2. At the end of the week t,he Slaters were rewarded with a win against East Stroudsburg North. The score was 3-0. Next up for the Bangor Boys is the Whitehall Zephyrs at home on Monday September 20th.

Golf: The Bangor Golf team started their week traveling to Saucon Valley and lost 422-490. The next day the golf team had a Tri-Match against Palmerton and Southern Lehigh and lost to both. The score of Southern Lehigh and Bangor was 410-476. The score of Palmerton and Bangor was 378-476. On Wednesday, September 15th, the Slaters golf team traveled to Easton and defeated the Red Rovers 448-492. The Slaters kept their momentum going and beat their rival Pen Argyl 443-461. Next up for the Slaters Golf Team is Colonial League Championship on Monday the 20th. The Colonial League Championship will be hosted by Saucon Valley.

Cross Country: The boys and girls Cross Country team traveled to Pen Argyl territory for an away meet this week. The meet was against Pen Argyl, Wilson, Palisades, Notre Dame G.P. , Saucon Valley, and Moravian Academy. The top runner for the girls team was Senior Lilly Ligowski, with a time of 26:35. The girls cross country team lost to all opponents. The boys team beat Moravian and lost to the other schools. The boys top runner was Senior Trevor Weidman, who placed fifth at the meet. Weidman had a time of 18:30. Coming in not long after him was Sophomore, Cameron Stout. Stout placed 11th with a time of 19:42. Next Tuesday the Bangor Cross Country team will travel to Wilson to run against Southern Lehigh, Catasauqua, Salisbury, Pen Argyl, and Wilson.