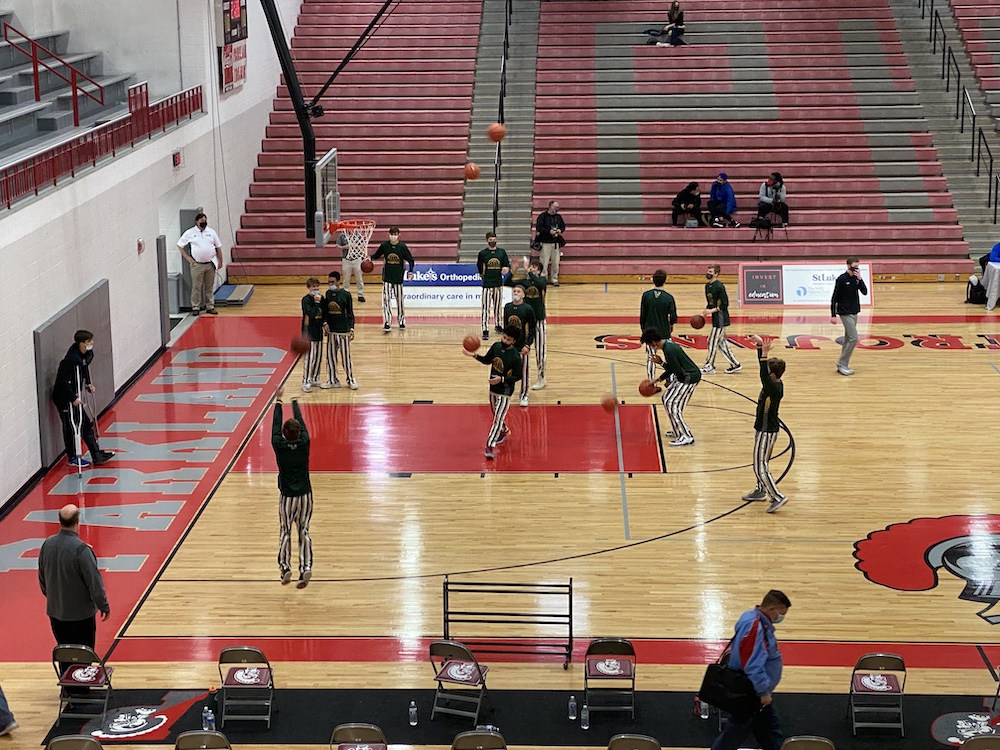 Parkland had to wait a little longer, but they were finally able to start their basketball season Tuesday night. The Trojans opened their 2020-21 season at home hosting the Vikings of Central Catholic.

In the first quarter, both teams offensively looked shaky, however, the defenses were exciting to watch. Parkland offensively was trying to move the ball around hoping for the best shot, but most times it never came. Central Catholic’s defense minus Christian Spugnardi found a lot of success from Liam Joyce, Andrew Csensits, and Griffin Patridge.

When Central got the ball for their offensive possessions, Parkland’s game plan was to stop Liam Joyce; and they did just that. Central now had to move it around and search for a good look, which many times, came from guard Tyson Thomas. The defenses certainly won the first quarter with the score 10-8 in favor of Parkland.

In the second quarter, the defensive battle continued. Central and Parkland were not giving away anything easy. Central started to click on offense, as Liam Joyce found a three and Tyson Thomas found some layups. Parkland still led on the scoreboard. Freshman Nick Coval was very impressive to watch as he did most of the scoring for the Trojans in the first half. To end the first half, Liam Joyce connected on one of two free throws and gave the Vikings an 18-17 halftime lead.

In the third quarter, Parkland came out and looked fresh. The threes were starting to fall and they were not giving away cheap fouls or fast break points. This was the start the Trojans needed to see in the second half to pull out a win. Parkland at one point held a five point lead over Central, but the Vikings responded. Anthony Jones knocked down a triple cutting the deficit to two allowing Central to go on a run near the end of the third, eventually tying the game 28-28. There was still time in the third and the freshman Coval took advantage for Parkland. Coval sent a floater into the air and got it to fall as the horn sounded giving the Trojans a 30-28 lead into the final quarter.

Central tried to pull away in the fourth quarter, but Parkland kept battling and kept it close. The biggest lead of the entire game was five and it came with 11 seconds left in regulation. Clutch free throws from Tyson Thomas made it 43-38 Central. That was the icing on the cake. A buzzer beater from Will Meeker made it 43-40, but Central Catholic pulled out the win.

Central gets their first conference win of the season and their fifth overall. Central was satisfied with the result, especially because they had to work for it. Parkland gave them a test, but it was a test Coach Dennis Csensits said they needed. Csensits also liked that they knocked down shots at the right times. Central will play Dieruff for their next two games. The first will be at Dieruff this Thursday and the second at Rockne Hall on the 23rd.