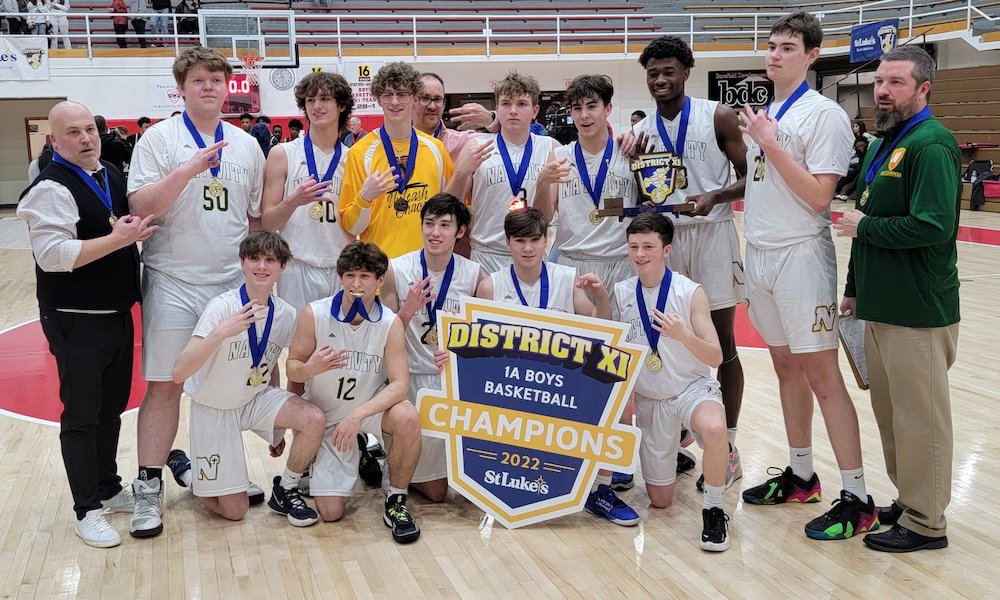 POTTSVILLE – Guard play in the postseason is crucial in having success on the hardwoods. That was evident Saturday night at Martz Hall. Behind Cody Miller and Julius Walborn’s barrage of long range jumpers, the Hilltoppers of Nativity BVM captured their third consecutive Boy’s 1 A District Championship over Notre Dame East Stroudsburg 71-47.

Notre Dame held a slim 15-13 lead after the first quarter as Trevor Hardy connected on two buckets behind the arc and had eight points in the quarter.

BVM’s defense stepped up though in the second stanza as they forced six Spartan turnovers behind the play of the two guards. Notre Dame had to come out of their 2-3 zone, meant to stop the inside presence of Marquis Ratcliff. Ratcliff then hit a three-point basket of his own at the horn gave him nine points for the quarter and a 39-27 at intermission. Ratcliff also finished with 15 points along with 15 boards.

The closest the Spartans came to making it a contest in the second half was 43-35 after scoring six consecutive points. The the Toppers went on a 12-0 run of their own to seemingly put the game away.

“The play of Cody, Jules and Jack Miller really stepped up tonight. They were knocking down shots from everywhere and really allowed us to open things up inside when the game out of that packed in zone,” said Nativity coach Mike Wilborn afterwards.

Nativity will face West Shore Christian on Tuesday in the opening round of state playoffs.