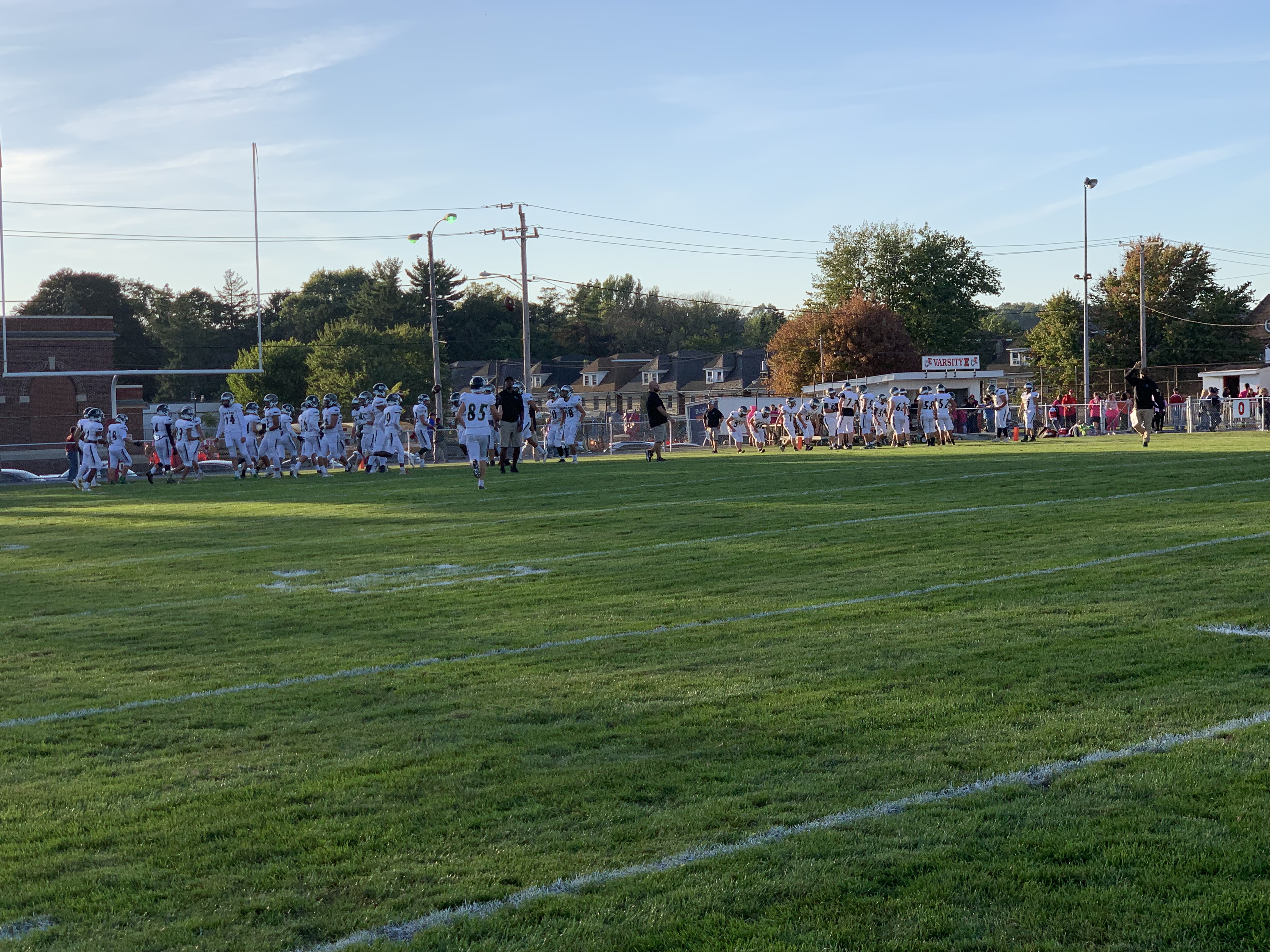 Emmaus (3-2) took a road trip to historic Cottingham Stadium Friday night. Easton (5-0) would be the hosts in front of another sold out Cottingham crowd. Emmaus won the toss and wanted the ball. Emmaus went three and out on their opening drive, much to the delight of the Easton fans.

Easton got the ball and moved it downfield but eventually were forced to punt. After getting the ball back, Emmaus moved the ball with Camire but were forced to punt. Easton was able to move the ball downfield for a Cole Transue 22-yard QB keeper. Following the touchdown, Brandon Camire fielded the kickoff and took it 92 yards for an Emmaus touchdown. The score was 7-7 after the first quarter.

In the second quarter, Emmaus came alive forcing Najee Adams to fumble. Emmaus recovered and were now locked in and ready to win. However their drive stalled, but Alex Orlando hit a 43-yard field goal to put the Hornets up 10-7. On Easton’s next possession, the Red Rovers, could not do anything with it and they were forced to punt.

Emmaus marched down the field and got to the end zone when Jake Moyer found Jameel Sanders for the touchdown. Emmaus led 17-7, and they were starting to take control over Easton. Easton would not let Emmaus blow it open, however.

Transue found Assad Brown for a touchdown with 1:20 left in the first half, which was huge. Now the lead was smaller, 17-14. Easton’s band and fans were making noise again. Emmaus took the ball to the 25-yard line. Orlando would hit his second 43-yard field goal of the game. Emmaus over Easton going into halftime, 20-14..

Easton received the second half kickoff and got a little scare as they were tackled at the ten-yard line after a muffed recovery. Najee Adams, who had been quiet all game, now came alive. He was finding holes all over the field. When Transue handed it off to Najee, he broke into the open but was chased down causing him to cough it up.

The refs ruled Najee down, which made the whole Emmaus sideline and their fans very frustrated. This play, however stalled out the Easton drive. Emmaus got the ball back and took it all the way down to the three-yard line. Brandon Camire scored for the second time on the tonight. Emmaus went for two but would not convert. Going into the fourth quarter, Emmaus led 26-14.

Emmaus was looking good, now up 12 at the start of the fourth, but Easton had other ideas. Transue found Chase Holmes for a huge TD on the first play of the 4th quarter. This made the score 26-21 Emmaus with 11:52 left in the game.

Cottingham, at this point was now shaking, everyone standing, jumping, and cheering. This made it hard for Emmaus to hear the play calls, which forced Emmaus to punt. Easton got the ball back and gave it to Najee Adams. He and the Rover offense chewed through the clock. They took it all the way down to 2:34, when Cole Transue was intercepted in the end zone by Emmaus’ Gabe Trexler.

This made Cottingham go silent, except for the Emmaus side, which was going crazy. Fans were hugging, screaming, and yelling. Emmaus, however, was too excited when they went back out on the field. They couldn’t move the ball at all. Easton was expecting the run and they shut Camire down.

Jake Moyer needed to convert a pass on third and eight. He misfired and that also stopped the clock to help Easton. Orlando punted it away leaving the Rovers 2:23 to score. Najee Adams moved down the field having six carries on the drive and the clock went with him.

Easton now had a first and goal on the one with 19 seconds left in the fourth. Emmaus needed a stop. All of their fans came down to the fence by the field to try to make as much noise as possible. Easton didn’t mind the noise as on first and goal Transue pitched it to Najee Adams for the Touchdown.

They went for two but could not convert. Easton now led 27-26 for the first time since it was 7-0. They felt confident they had saved their undefeated season and they did. Emmaus had 16 seconds to try to get a field goal opportunity, but they couldn’t. Misfiring a pass on first down and now down to ten seconds, Emmaus needed a miracle. They got six yards on second down.

Easton now had Emmaus at their own 35-yard line with eight seconds left with a third and four. Jake Moyer completed a pass to Chad Newhard, but he was brought down immediately and Easton would storm the field in celebration.

Easton had overcome a 12-point deficit in a single quarter, to improve to 5-0. Emmaus fell to 3-2. Easton will take on Central Catholic next Saturday at J.Birney Crum Stadium at 1:30. For Emmaus they will host Liberty at EPSD stadium on Friday night at 7:00.

Transue’s Pass to Asad Brown for the TD. 17-14 Emmaus as the PAT is good. @D11Sports pic.twitter.com/urAMrXK2D7

Orlando with his second 43 yard field goal of the night. 20-14 Emmaus over Easton at the half. @D11Sports pic.twitter.com/rt8CPG3iM0

Camire is in the end zone for the 2nd time tonight! Emmaus would go for 2 but would not convert. 26-14 Emmaus over Easton. @D11Sports pic.twitter.com/s5oan1OtBW

Najee Adams for the touchdown Easton up 27-26 they would go for 2 and not convert. 17 seconds left in 4th. @D11Sports pic.twitter.com/6ylUtoZEhk