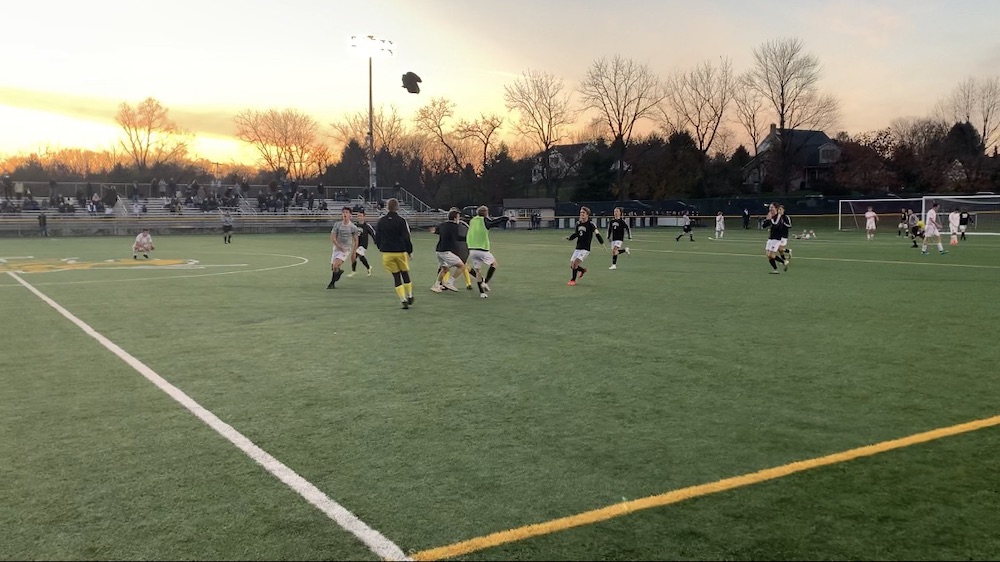 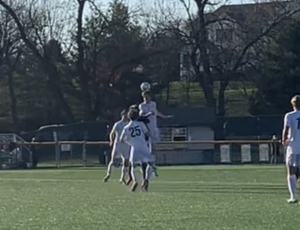 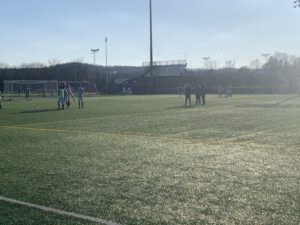 The Emmaus boys soccer team hosted the Explorers of La Salle College High School Saturday afternoon in the state playoff quarterfinals. For Emmaus, they were looking for their first win in the state playoff tournament since 2006, and they felt confident they could get the job done. Emmaus’ last game before Saturday’s contest was the district championship game in which they were victorious. La Salle was 15-1 and had only given up six goals coming into Saturday. The Explorers would look to their defense in order to find success.

The game got off to a chippy and physical start. The first five minutes of the game saw two fouls committed by both sides. The Explorers, already under the Hornets’ skin, quickly took advantage. Midfielder Sean Jennings smashed a one-time volley past the Emmaus goalkeeper and into the back of the net.

Just twelve minutes into the game, the Explorers grabbed a 1-0 lead. Emmaus needed to respond quickly as the momentum shifted towards the Explorers. Emmaus looked to their super sub. Coming in off the bench was senior Nate Romig who scored the goal to win the district championship last time out for Emmaus. Romig was not even on the field for five minutes and he made an instant impact. Hudson Peck blasted a shot that was saved by the keeper, however, the rebound fell to Romig and he calmly finished the chance to level the score 1-1. With seventeen minutes left in the first half and the score tied, momentum was leaning towards the Hornets, but they couldn’t take advantage. Both teams headed to halftime deadlocked at one.

In the second half both teams came out poised to take the lead. They created chances in the early minutes, but both goalkeepers kept the shots out. That was until Emmaus midfielder Alexander Toto noticed the Explorers’ goalie off his line and Toto launched the ball from about 35 yards out. It sailed over the goalie and into the back of the net. Toto not only scored an amazing goal, but it also was a goal that gave Emmaus a 2-1 lead with 20 minutes left.

The Explorers were not done fighting. They started to create chances off corner and free kicks. Emmaus’ back line was being pressured a lot and Explorers senior Brandon Curran pressured them even more. Curran got inside the 18 yard box, had his original shot saved, gobbled up the rebound and put it past goalie Ty Beiler to make the score 2-2 with 13 minutes left. As the sun started to set, both teams were thinking they would be going to overtime, but Emmaus found another chance. Hudson Peck served a corner into the box, Patrick Walsh met the ball in the air and headed the Hornets in front 3-2.

With just eight minutes remaining, Emmaus could sense their first state playoff win in fourteen years. La Salle, however, created one last chance, and Emmaus was up to the task. The Explorers sent in a a dangerous free kick with two minutes left, but junior goalie Ty Bleiler dove off his line and caught the ball. It was a very good chance for the Explorers, but Bleiler saved the day and secured the win. Emmaus would not let La Salle touch the ball again.

The horn sounded and Emmaus stormed the field celebrating a huge achievement. This was their first win in the PIAA state playoffs since 2006. Coach John Cari said, “This is really cool. This is special.” You could hear the emotion in Cari’s voice. He was extremely proud of the Hornets.

While this win was exciting and worth celebrating, Emmaus now has until Tuesday to prepare for their semi-final matchup. Emmaus will travel to Neshaminy High School to take on the Redksins, who beat Pennridge in PK’s Saturday. The winner of that game will advance to Hershey to play in the state finals against the winner of Cumberland Valley and Seneca Valley.

Video is of game-winning goal, Hudson Peck delivered the corner into the box and Patrick Walsh scored it.