Emmaus goes 4 for 4 on Saturday at Cedar Beach

Emmaus opened up play this morning against Freedom and they started off nailing shots one after another. Emmaus’ depth also proved to be a factor as Freedom only had one sub. Emmaus would fight hard in the second half to our score Freedom 27-6 and win 46-22.

The second game Emmaus played great against Berks Catholic which was a rematch of last years tournament final. Emmaus led 26-16 at the half. They would continue their success in the second half and Emmaus would win 43-31 over Berks Catholic.

Emmaus would play again this being their third game of the day. They took on a very physical Stroudsburg team who we’re motivated and wouldn’t give in. Stroudsburg another team who only had one sub, would cost them against a deep Emmaus team. The bench of Emmaus carved out a 3 point advantage at the half 22-19. Emmaus came out in the second half like they were never winded they went on a 10-4 run to start before Stroudsburg called time. Emmaus continued to roll in the second half and at one point led by 16. They would win 47-34.

In the final game of the night for the Hornets they played against Central Catholic. Emmaus came out rolling to start leading 11-3 after 2 minutes of play. Emmaus lead 31-13 at the half. In the second half Central still had no response for Emmaus’ transition game and Emmaus continued to roll on to victory 58-24. Emmaus played spectacular all day and will play at 12 tomorrow against an opponent yet to be determined. 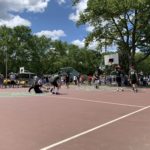 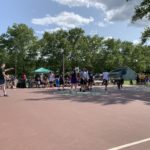 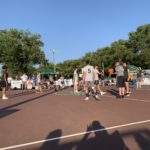