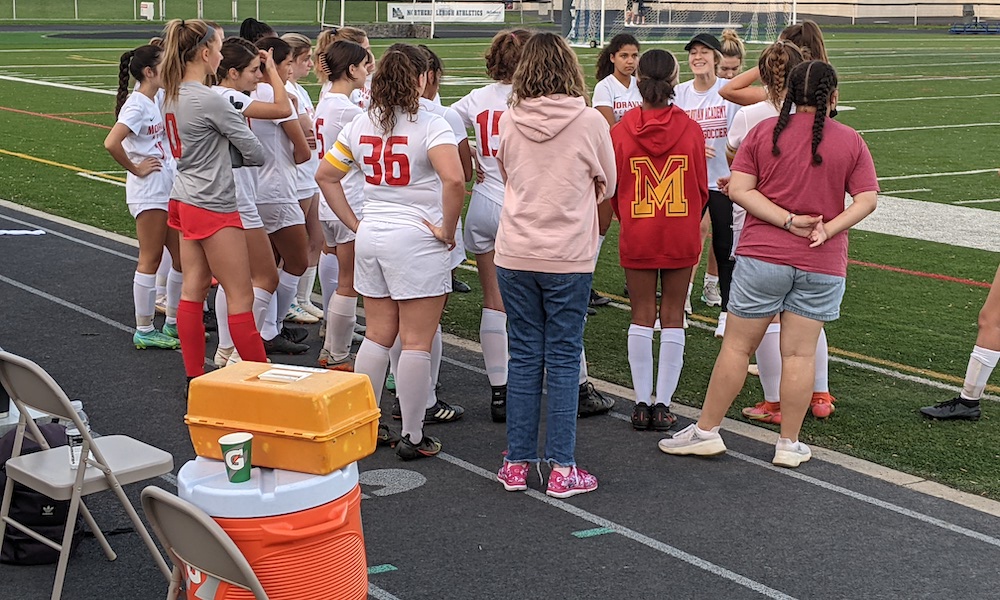 Northwestern Lehigh (16-1-1) showed why they finished the regular season as the top team in the Colonial League when they downed Moravian Academy (11-5-1) in impressive fashion Thursday night, beating the Lions 3-1. The win puts the Lady Tigers into the league championship game against Southern Lehigh. The game will be played Saturday at Alumni Field in Catasauqua.

Right from the start, Northwestern jumped out early as they needed just 37 seconds to move down the field, pick up a corner kick and convert it into the game’s first goal. As the ball came in from the corner, Kate Edgar headed the ball past Moravian Academy freshman goalkeeper Addie Etter. Not content with a quick 1-0 edge, the Lady Tigers needed just under five more minutes to strike again. This time, the goal came on a penalty kick by Sophia Motolese and Northwestern was off and running.

“Those two goals, coming that quickly, really put them back on their heels,” said Northwestern Lehigh coach Jordan Smith. “We wanted to come out and score quickly and get in front and the girls did a good job with that and it made things easier for us to have that nice lead so early in the game.”

Northwestern Lehigh continued to be the aggressor and seemed to be a step or two ahead of Moravian Academy. Thanks to strong athletic saves by Etter, the Lions were able to keep it at a two-goal deficit until Kaitlyn Browning and Brooke Balliet hooked up on a nice play that caught Etter in position to defend a shot by Browning, but with Balliet being the one to get Northwestern’s third goal. As the ball bounded in front of the left post, Browning made an acrobatic move to get the ball to the other post where Balliet was left wide open to push a shot into the back of the net. The play gave Northwestern Lehigh a comfortable 3-0 lead with 10:38 left in the first half.

“I just saw Katie on the other side of the post, and I thought just go,” said Balliet “Everyone was yelling that it was offsides, but I just kept going because I saw the play.”

Moravian Academy did look for an offsides call, but the officials allowed the goal.

With just under six minutes left in the half, Moravian Academy mounted some momentum and senior Lauren Reid put a shot past Naomi Glassberg to pull the Lady Lions within two goals at 3-1.

The second half of the game turned into a defensive struggle between the two teams, although Moravian Academy did spend much of the half on the attack. Glassberg made several impressive saves and when Northwestern Lehigh was able to get some open looks, it was Etter who made big plays to deny Northwestern another goal.

The second half became much more physical than the first half and saw Reid pick up a yellow card with 10:00 left in regulation.

“I think if the halves were switched and the second half came first, I think that it would have been a completely different game,” said Moravian Academy coach Darien Vercillo. “They came out and they wanted it more than us in the first half and we kind of came in soft and we came in not prepared, which is very unlike us.”

Even with the loss, Vercillo believes that the game saw some bright spots involving two of her younger players in Etter and fellow freshman Angel Delurhey, who both stood out in the game.

“I think that Angel worked really, really hard. I mean to the top of her capacity. She killed it today and I think our freshman class is starting to kind of show the seniors what they have and dhow that they can be a part of it, that they can make a difference,” said Vercillo. “I don’t think that Etter had really found herself until that second half of this game. I think being young, she’s been a little bit nervous. She’s playing with a lot of older kids, and she’s not used to it. I think today she got to the point where she feels like she knows who she is and I am so proud of her for that.”