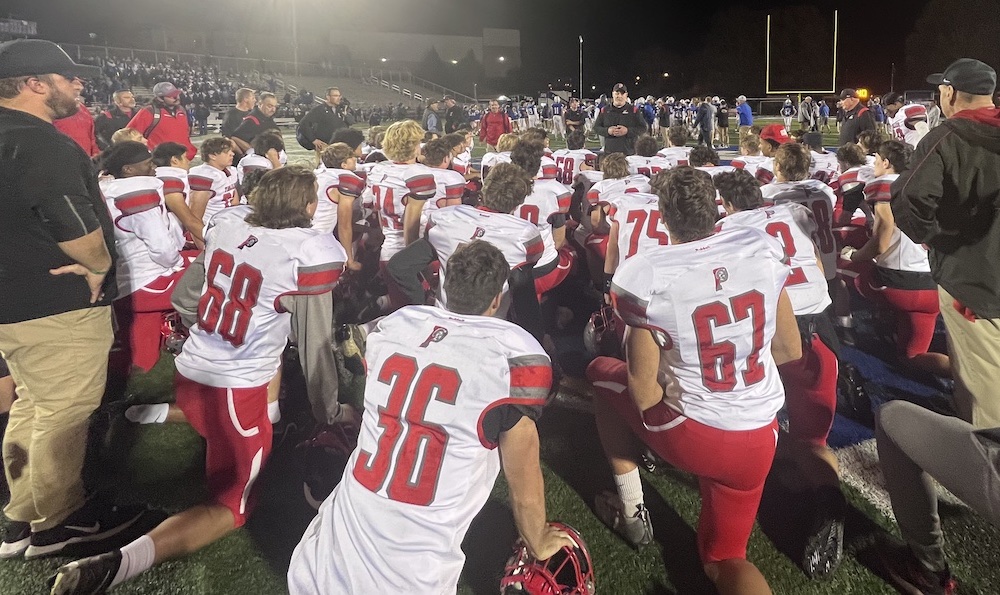 NAZARETH – Parkland’s Trey Tremba rushed for 218 yards and three touchdowns to lead the Trojans to a 42-14 win in Friday’s District 2-4-11 Class 6A subregional game at Andrew S. Leh Stadium.

“He is like a machine. He plays both sides of the ball and doesn’t come off the field,” said Head Football Coach Tim Moncman. “He has one gear and our offensive line did a great job blocking for him tonight.”

Entering the game, the Blue Eagles were without star quarterback/safety Sonny Sasso who was out with a hand injury. Sasso passed for 1,972 yards and 21 touchdowns and was a key player on defense. He had surgery Friday on his throwing hand which ended his football season.

“We didn’t change our game plan knowing Sasso wasn’t going to play tonight,” said Moncman. “Everyone has injuries and we lost our quarterback two weeks ago and missed two linemen tonight. We had kids step up tonight.”

On the opening drive, it looked like Nazareth’s defense came up with the big stop, but a penalty gave the Trojans new life. After a big play down to the Nazareth three. The Trojans opened the scoring on their first drive of the game. Tremba powered in from three yards out and Gryffin Mitstifer’s extra point was good. Parkland led 7-0 with 8:16 left in the first quarter.

Parkland extended its lead in the first quarter. Tremba added his second touchdown run of the night. He went in from five yards out. The Trojans led 14-0.

Nazareth got the stop they needed when Jaidon Morgan intercepted a pass to end a Trojan drive with 1:05 left in the first half.

In the first half, Parkland’s defense stopped the Blue Eagles twice in the RedZone and went into halftime leading 14-0.

“Nazareth’s got two of the best wide receivers in high school,” said Moncman. “Our defense stepped up tonight and played well. We did a great job.”

Parkland’s Marquez Wimberly recovered the Nazareth fumble on the Blue Eagles’ 40. The Trojans capped off the drive when quarterback Luke Spang hit Jack Harrison for a 12-yard touchdown pass. With 8:57 left in the third quarter, Parkland added onto their lead 21-0.

“Our front four did a great job pressuring them all night,” said Moncman. “When we put it all together, we are tough to beat.”

The Blue Eagles answered right back in a big way. Chris Bugbee hit Nolan Lobb for a 74-yard touchdown pass. Bugbee’s kick cut into the lead, 21-7. Bugbee finished the game passing for 241 yards and one touchdown. Lobb led all receivers with five catches for 155 yards and a score.

Parkland scored on their next two drives. Tremba scored on a nine-yard run and Spang added a 32-yard run. After three quarters it was 35-7 Parkland.

Spang finished the night passing for 164 yards and scored two touchdowns (pass and run). Harrison caught six passes for 132 yards and a touchdown.

“Spang was forced into action his sophomore year and keeps maturing and making the right decision,” said Moncman. “He keeps getting better each week running the offense.”

Early in the fourth quarter, Nazareth’s defense came up with the blocked field goal. They took over and drove down the field. The Blue Eagle’s Collin Wells scored on a two-yard touchdown run with 9:17 remaining in the game.

Parkland added a late touchdown with 2:18 left in the game. Wimberly scored from four yards out.

Parkland advances to the next round of the subregional District 2-4-11 Class 6A playoffs and plays Northampton. Nazareth Area finished the season 9-2 with an EPC South Title.

The other semifinal game is between fourth-seeded Freedom and top-seeded Emmaus who both had big wins Friday night.