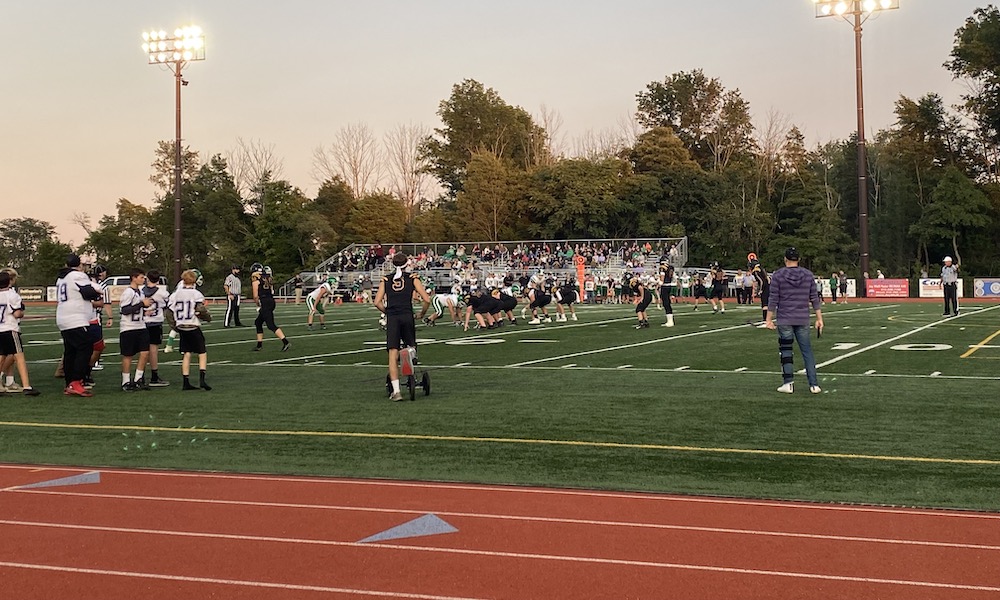 After a crushing loss last week, Palisades suited up to face Pen Argyl at home on Friday night. Both the team and home crowd were hoping for a win with the student section decked out in red, white, and blue to honor 9-11. Pen Argyl was also coming off a loss last week against Catasauqua, 15-42.

The game started off slow for both teams. Neither were able to make anything happen in the first quarter. However, the second quarter sparked some action from the Pirates. With 8:08 left in the first half, Junior Logan Winters scored the first touchdown of the game with Kai Stiansen getting the assist. The kick was good from Senior Kicker Micheal Wallbillich, and the Pirates led 7-0.

With just 0:54 left in the half, Palisades took a time out. After a few failed pushes towards the end zone, the Pirates were able to extend their lead with another touchdown. It was Senior Quarterback Jaden Newton with the carry at 0:19 left on the clock. The 35-yard kick by Wallbillich was no good, but Palisades was up 13-0 going into half-time.

Pen Argyl tried to make their move in the third quarter. They started on the 24-yard line with Senior Cole Dorshimer gaining seven before being brought down by Sophomore Daniel Haubert. After gaining a first down, the Green Knights could not push through the Pirates’ tough defense and the ball was turned over to Palisades.

With 4:30 left in the quarter, Stiansen had a 15-yard run, putting the ball on the Pen Argyl 39 yard line. A pass completion from Newton to Senior Kyle McGrath gained the first down. At 2:43 on the clock, there was an official’s time out because Wallbillich was shaken up on the play. With third and seven, McGrath was carried out of bounds at the three yard line to bring up a 1st and goal. On this play Green Knight Zach Rudy was shaken up and temporarily walked off the field. McGrath easily scored the three yard touchdown and Wallbillich’s extra point was good. The Pirates led 20-0 with 1:59 left in the third.

The Green Knights desperately tried for some magic, but once again could not fight through the Pirates’ defense. The fourth quarter had little action until Pen Argyl seemed to find their groove. A pass completion to Dorshimer gained 19 yards for the visitors and brought up a first and goal. However there was a fumble on the next play and McGrath came up with the recovery. A few plays later, McGrath came up big again with a 24-yard gain to put the ball on the 44 yard line. With six minutes left in the game, Stiansen scored a 33-yard touchdown to extend the Pirates’ lead to 26-0. Wallbillich made the extra-point kick.

After getting the ball back with about a minute left, the Pirates ran down the clock. Newton took a knee on the last play and Palisades claimed victory, 27-0.

Next week, the Pirates are away at North Schuylkill High School on Friday, while Pen Argyl takes on Tamaqua High School at home on Saturday afternoon.

D11Sports.com Daily Scoreboard results for September 11, 2021
Phillipsburg and Hillsborough tie it up