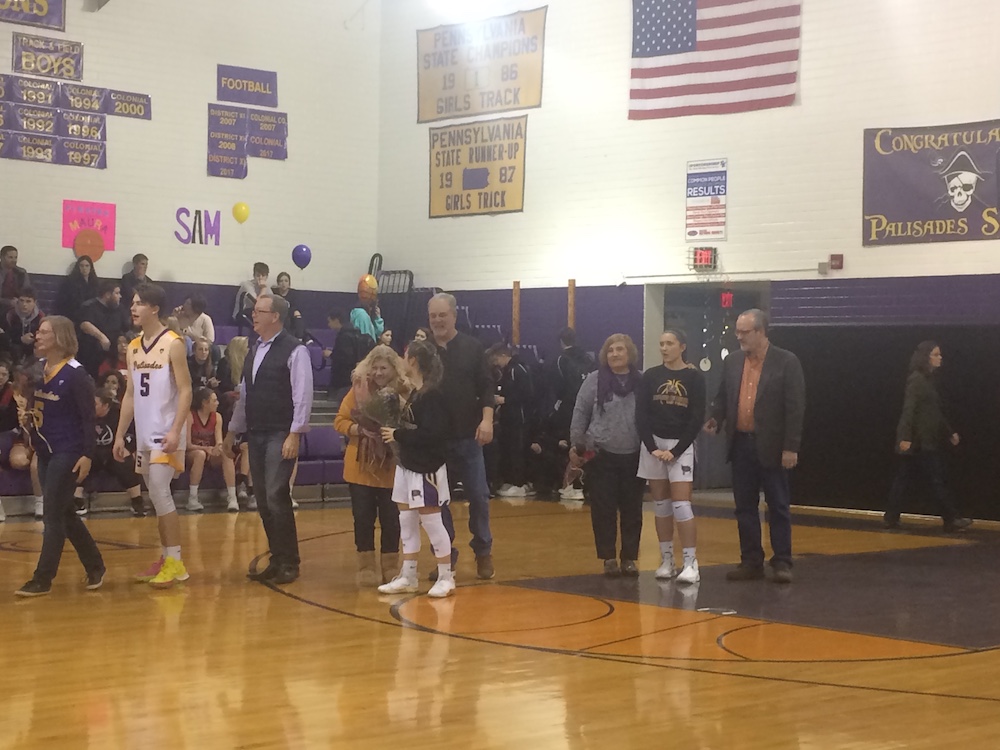 The Palisades Lady Pirates headed onto the court Tuesday night for their final game of the season. For their seniors this was a special game, their Senior Night. Seniors Sam Crum and Maura Campbell were honored. Starters for Palisades were Maura Campbell, Libby Stiansen, Sam Crum, Alayna Stiansen, and Trinity Williams. Saucon hit the court with Colleen Williams, Abbey Soltysiak, Haley Lebo, Ally Frace, and Allison Cort.

Saucon started it off strong, scoring the first basket. Palisades took the lead, scoring a three. With 3:54 on the clock, Cort scored off of the baseline, 4-3 Saucon. Trinity Williams got the layup, and then went on defense to knock away a basket attempt. Saucon hit a three-pointer, but Trinity Williams took the ball down the court to score once again for Palisades. At 1:30 on the clock, the score stood at 7-6 with the Pirates in the lead. With 40 seconds, Trinity took the ball away and dribbled down the court to score. Saucon tied it 9-9 with a three-pointer to end the quarter.

At the 6:12 mark of the second quarter, Colleen Williams scored a long two for Saucon. Libby Stiansen came off of a timeout at 4:40 to score her first basket of the night, a three-pointer. The score was12-11. There was no more scoring until Trinity Williams had a couple free throws with 1:03 left in the half. She made the first, but missed her second. The Pirates stole the ball back and Alayna Stiansen made her first basket of the night. After a basket by Saucon at the buzzer, the quarter ended at 16-13, Palisades still in the lead.

Trinity Williams scored two more to start off the second half with less than a minute in. The score changed to 20-13 when Libby gave the assist to her sister, Alayna, for the basket. With 6:10 left in the quarter, Libby shot a basket herself, widening Palisades’ lead. Saucon got a couple free throw attempts, making one. At the 5:33 timeout, the scoreboard read 22-14. Trinity sunk another basket, and then Saucon returned with one of their own. Freshman Ashley Amato made her first basket of the night, a long three-pointer. The score was 27-16 with 4:35 left to play in the third quarter. Saucon got a couple of free throws at 3:17, making two. Sam Crum got on the scoreboard with a long two pointer. Libby Stiansen shot her third, three-pointer of the night, adding to Palisades’ score. Both teams sunk a few more, the score being 34-18 at the end of the third quarter.

Palisades got the win, 43-27. Though hoping to reach 1,000 career points, Trinity Williams for Palisades fell four points short. Good news is that Trinity is a Junior, meaning she will most likely reach that milestone in the first game of next season.