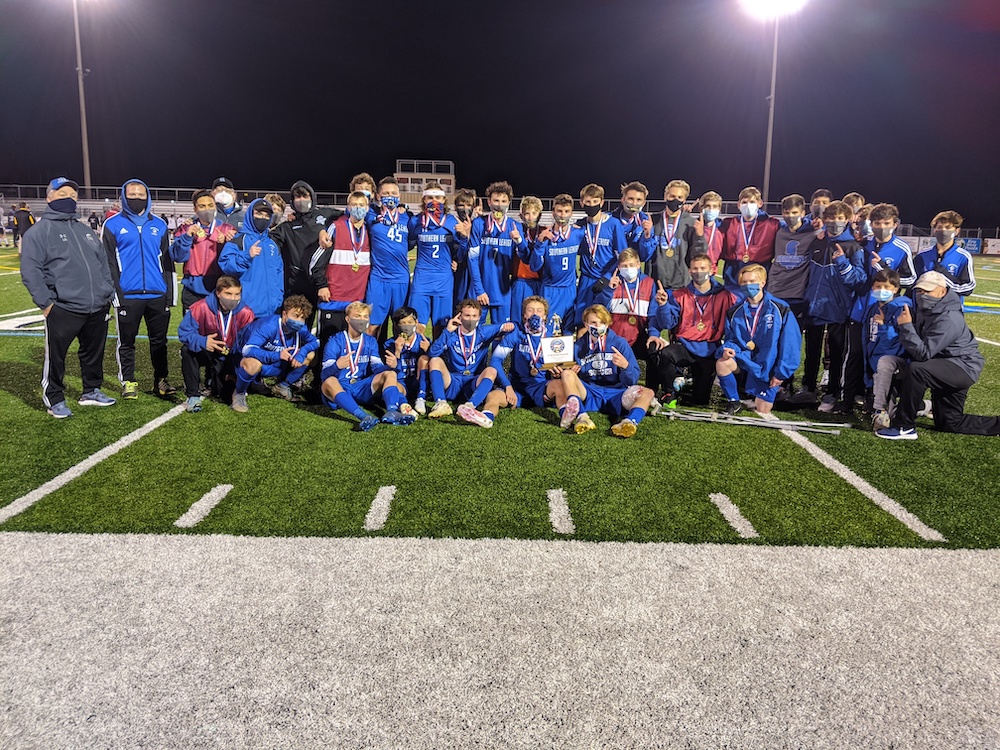 Northwestern and Southern Lehigh have had some epic battles over the past few seasons. Saturday night in New Tripoli, it was the boys from further south that came out of the battle victorious as their Colonial League championship game had to be settled in penalty kicks, which the Spartans won 4-3. The win gave Southern Lehigh their first league title since 2012 and sends them into next week’s district playoffs on the highest of notes.

“Obviously, you want to win it with a goal during regulation,” said Southern Lehigh coach Mark Evans. “Penalty kicks aren’t the way you ideally like to end a game like this, but both sides are exhausted and you have to end it some way.”

Southern Lehigh struck first when Gavin Bealer launched a shot from 45 feet and got it past goalie Austin Vogwill for a 1-0 lead that carried into halftime.

It looked like the Tigers had drawn even with 29 minutes left in the game when Seth Brady took a pass through the middle, made a couple of smooth moves, and beat goalkeeper Ayden Sharper. Those listening closely though heard a whistle from the far side of the field, signaling an offside call and negating the goal. Just a couple of minutes later, Seth Brady seemed to put every muscle he had into a kick, but Sharper stopped the laser and covered it up to be sure it wasn’t going anywhere.

Northwestern may have been frustrated but it didn’t show as they continued to battle. Southern Lehigh was called for a foul, giving the Tigers a penalty kick as a foreshadowing of things to come. Jeff Garcia made the kick as he went left and Sharper dove right and Northwestern tied the game 1-1. As time ran out in regulation, Garcia would launch a shot from 30 yards out only to see it be stopped by Sharper.

Both overtime periods were dominated by Northwestern Lehigh but even with a number of high-quality shots, Sharper was up to the task or the shots would go just off the mark. From midway through the second overtime, the Tigers’ feet were set on rapid-fire as they moved the ball through the Spartans defense and continued to take aim at Sharper, who made a total of 12 saves in the game. The end result was 110 minutes of soccer and a 1-1 tie.

Garcia, who is known as one of the best penalty kickers in the area, lined up to shoot first and put his shot over the crossbar. Southern Lehigh gained the advantage when Bealer sent his shot past Vogwill to give the Spartans a 1-0 edge. Colin Coffield hit his shot as did Southern Lehigh’s Tyler King. The third round would find the Tigers evening up the penalty kick phase when Josh Zellner made Sharper dive but the ball went off his hands and into the net. Landon Bealer put a shot wide of the goal and the two teams were at 2-2 through three rounds, but not for long. Lucas van Lierop went high and saw his shot sail over the crossbar for Northwestern and Michael Cocozza regained the edge for the Spartans when he reached the back of the net.

“You’ve just got to calm yourself down,” said Sharper about his approach to facing penalty kicks. “You have to visualize yourself saving the PK. It’s calming down and reading the other player and reading the ball.”

With the game coming down to the final round, Seth Brady had to make his shot to keep Northwestern Lehigh’s hopes alive and he nailed it. From there, Luca Prando was the last man up for Southern Lehigh and he didn’t miss, setting off the celebration for the Spartans.

“Honestly, I just cleared my head of everything around me and pretended like it was practice; like we were on the practice field and I was just looking to slide it home,” said Prando of his game-winner. “This was my first time in this position away from the practice field and under the lights and especially in a game as big as this.”

In many of the matchups between the two teams, Northwestern has gained the edge. This season though they lost a one-goal game to the Spartans during the regular season before Saturday night’s loss. The growing rivalry will likely continue in districts where they met in last year’s championship game that Garcia won with a highlight reel bicycle kick in overtime. Predicting the seedings and brackets, the two teams aren’t likely to meet in the finals, but instead, figure to meet a round earlier.

“We fought really hard and had the better of the play in the second half, we just didn’t finish our chances,” said Northwestern coach Nate Hunsicker. “We thoroughly outplayed them even in the two overtime periods, but then when you go into the PK situation it’s a crap-shoot.”