Blue Mountain Offense too Much for Mahanoy Area 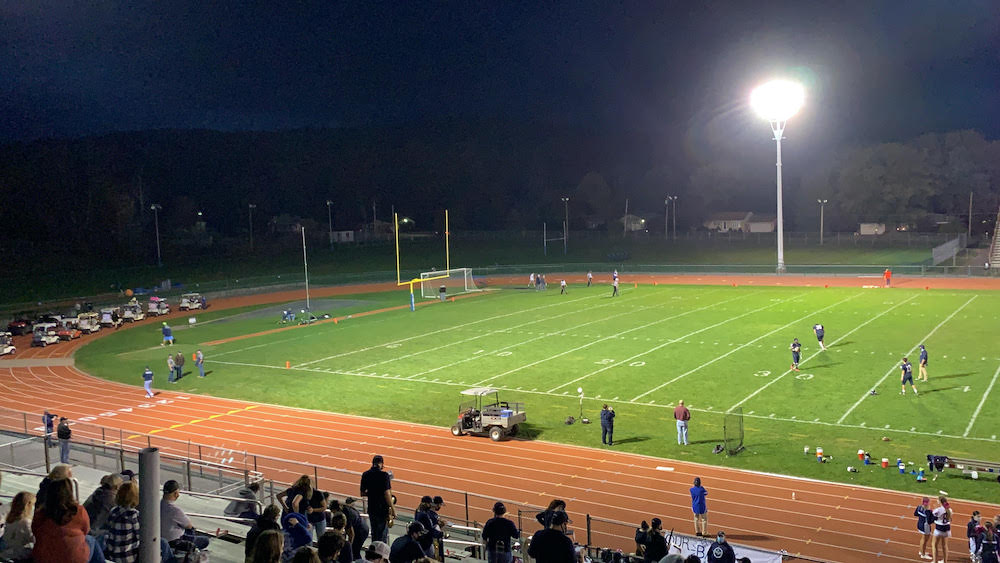 Both Mahanoy Area and Blue Mountain entered Friday’s contest with 3-3 records and coming off of victories. The Bears were coming off an emotional 42-27 victory over Nativity BVM, where quarterback Ben Terry rushed for 250 yards and four total touchdowns. Blue Mountain on the other hand was coming off a 35-0 Thursday night victory over Lehighton and was riding a two game shutout streak. Terry came into the matchup leading the Schuylkill League in rushing yards and touchdowns, so the Eagles knew where they had to stop the Bears’ option rushing attack in order to be victorious.

On the second play of the game, Jack Dean recovered a Bears’ fumble and four plays later Carter Thompson plugged into the end zone from five yards out for a touchdown. Carson Steinruck converted the extra point to make the score 7-0. Mahanoy Area stayed poised.  Ben Terry capped off a ten-play, 80-yard drive with a one yard rush for a touchdown. The extra point was blocked keeping the Eagles up 7-6.

The Eagles did not wait to capitalize on a short kickoff when Gavin Bartholomew found Bryce Hensley on a double move for a 58-yard touchdown connection. Steinruck added an extra point to make the score 14-6. The Eagles’ defense remained stout for the end of the first quarter and majority of the second quarter. The Eagles tacked on two more touchdowns, an Eman Parker 40-yard rush and a Gavin Bartholomew  nine-yard rush, to increase their lead to 28-6 with a little over two minutes to go in the half. Mahanoy put together a two-minute drive to the end zone, when Ben Manley found paydirt on a one-yard rush. The two-point conversion was no good, making the score 28-12 going into halftime.

Going into the third quarter, the message for Blue Mountain was to put them away. Leading by 16 points going into halftime and getting the ball to start the third quarter, the Eagles were ready to take advantage of their first possession of the second half. The whole momentum of the game swung on the opening kickoff of the second half when kicker Ben Terry lined up to kick off to Bryce Hensley and Toby Renninger back deep at their own ten-yard line. As soon as he approached the kick though, Terry hit the top of the ball so it dribbled end over end ten yards before he recovered the ball himself. There was no signal by the referees for a clean recovery or an illegal touching penalty, so with the Blue Mountain defense not ready for action on the field, Mahanoy snapped the ball quickly and Terry kept the ball himself for a 40-yard run inside the five-yard line. Mahanoy got moved back to the 13-yard line, but Terry converted a quarterback keeper to the end zone and converted a two-point conversion pass to trim the deficit to 28-20.

A lopsided first 22 minutes of the game had changed to Mahanoy’s favor within the final minutes of the second quarter and first of the third. Blue Mountain added another Nick Johnson three-yard touchdown with the kick being blocked to make the score 34-20. Ben Terry broke off a 63-yard touchdown run on a key third down late in the third quarter to make the score 34-26.

Blue Mountain pulled away in the fourth quarter as Bartholomew found Jack Dean for a 17-yard touchdown and ran in for a one-yard touchdown himself later on. Freshman Payton Fasnacht added an eight-yard touchdown as time wound down to seal the final score at 54-26. Despite 249 yards rushing from Ben Terry, the Eagles improved their record over .500. Blue Mountain heads into their rivalry matchup this week at Pottsville (6-1).