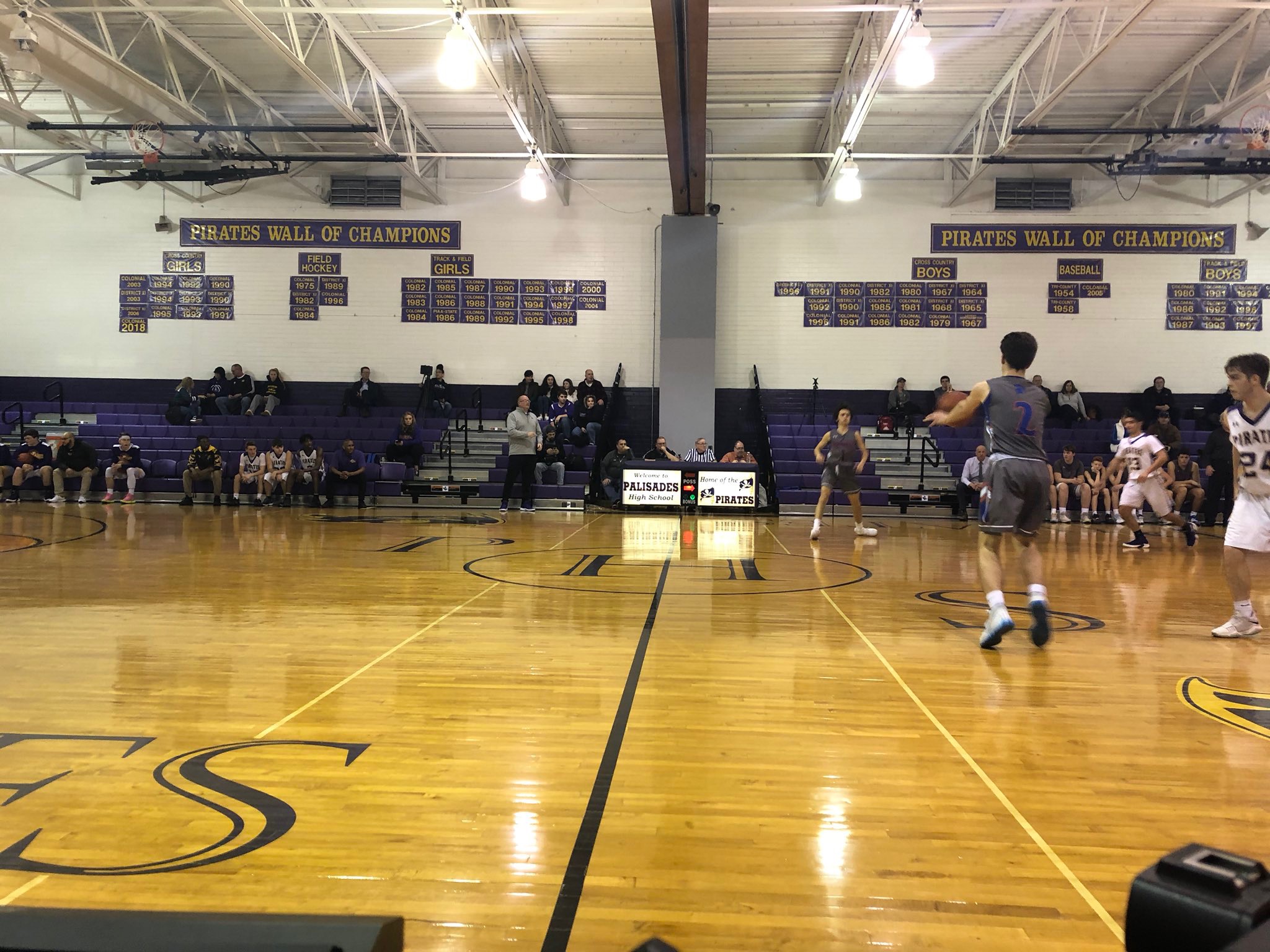 The Palisades Pirates took the court Friday night to battle the Southern Lehigh Spartans. As Southern Lehigh is the defending champions, Palisades was headed into a difficult game, but coach Ham said he wouldn’t let his players get intimidated. Both coaches named a player to watch before the game. Lefty Liam Carey was named for Palisades and Daryl Coleman for the Spartans.The starting lineup for the Pirates were Brandon Moan, Liam Carey, Caleb Johnson, Zach Duke, and Bobby Snyder. Southern Lehigh’s starting men were Matt Tankred, Chris Andrews, Daryl Coleman, Liam Gaughan, and Kyle Hoff.

Southern Lehigh started with the ball. Carey quickly took the ball away and brought it up the court to help Bobby Snyder get the first basket of the night. Chris Andrews for the Spartans continued the game with a basket of his own to tie the game. Southern Lehigh kept up their tempo when Matt Tankred was fouled. He missed his first free throw, but made the second, making the score 5-4 with Southern Lehigh in the lead. Tankred received another free throw chance and made both of them, changing the score to 7-4 with four minutes left in the quarter.

Andrews sunk another basket and a few moments later, Carey sunk two free throws, making the score 9-6. Andrews hit a three pointer, widening the Spartans’ lead even more. Carey brought the ball down again and shot a basket of his own, followed by one from Brandon Moan, cutting the lead to 12-10.

Brandon Fox wove through traffic and scored his first basket of the night on a rebound, tying the game at 12-12. With just a minute left, Southern Lehigh made two more free throws. Kyle Hoff continued the Spartans’ momentum with an outside three pointer. The action packed quarter ended with a score of 18-12 in favor of Southern Lehigh.

Ike Aherne started the quarter off with his first basket of the night. Fox continued Palisades’ momentum to cut the lead to two. Southern Lehigh battled back with a three pointer by Chris Andrews. Daryl Coleman, one of Southern Lehigh’s key players to watch, seemed to wake up this quarter and quickly scored two baskets of his own.

Bobby Snyder sunk two free throws and the fast pace continued until the score was 23-20 with the Spartans in the lead at three minutes left in the half. Brandon Fox took the ball down court and gave Bobby Snyder a huge assist to cut the lead down to 23-22. The Spartans changed the pace right away with a couple baskets of their own.

Bobby Synder made two free throws to make the score 27-24. Brandon Fox got a free throw chance of his own, sinking two and cutting the lead to 27-26. Chris Andrews made it look easy and sunk a basket bringing Southern Lehigh’s lead back up. The Spartans went to the free throw line with 39 seconds left in the half. Coleman made both and widened the lead to five points. The Pirates called a timeout with 4.1 seconds left in the half. Unfortunately the Pirates were unable to score and the half ended at 31-26 in favor of the Spartans.

Tankred for Southern Lehigh scored the first basket of the second half. Liam Carey came in big with a three pointer, only his second three pointer of the season. Coleman then returned Carey’s with one of his own, making it way outside of the three point line. After a few minutes of back and forth play, Tankred got the rebound and caught Palisades off guard with the basket, making the score 40-29. Zach Duke, a sub for the Pirates, wove through traffic to bank his first basket of the night. Southern Lehigh scored a couple more free throws and baskets to up their lead even more. Brandon Fox brought the ball down to score, shortening the lead to ten. Moan continued the Pirates’ momentum with a three pointer. As the clock wound down, the score remained 43-36 for Southern Lehigh.

The Pirates started off with the ball in the fourth quarter and Caleb Johnson quickly scored a much needed basket by Palisades. Coleman had two free throw chances, but didn’t connect and soon after Carey had two of his own. He made both and cut the lead to 43-40. The confidence didn’t last long when Andrews made another basket. The ball went back and forth until Andrews was able to take it away and give the assist to Coleman for an easy basket. Near the four and a half minute mark, Southern Lehigh had an eleven point lead, 51-40.

Another basket by the Spartans made it 53-40. Andrews made a couple more free throws, at that point scoring 20 points in the game thus far. Carey went on offense and put up another basket for Palisades, making the score 55-42. Both teams played aggressively until the end, with Southern Lehigh edging Palisades out on this one.

The final score was 60-52, making the Pirates 4-4 on the season. They are home next against Plumstead Christian. This win made Southern Lehigh 7-1 on the season and their next game is home against Antietam.