The Pen Argyl Green Knights were looking to get a strong start in the first round of the District XI playoffs against the Notre Dame Green Pond Crusaders on Tuesday afternoon.

In the early innings, the Green Knights were hitting efficiently. Brooke LaBarre broke through with a double, which eventually led to an RBI double for Carina Cutone. Pen Argyl defended their lead with the solid pitching of Kaitlyn DePalma. DePalma retired the first three batters of the game with strikeouts and continued pitching solidly for the majority of the game.

The Green Knights stayed alive by responding with a sacrifice fly that allowed Jacqueline Kerler to cut down the Crusaders lead to one, which made the score 3-2 going into the seventh inning. Pen Argyl was unable to rally back in the last inning, resulting in a 3-2 loss, while the Notre Dame Crusaders will be advancing in the District XI playoffs. 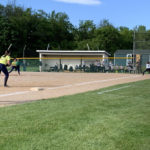 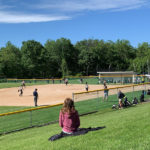