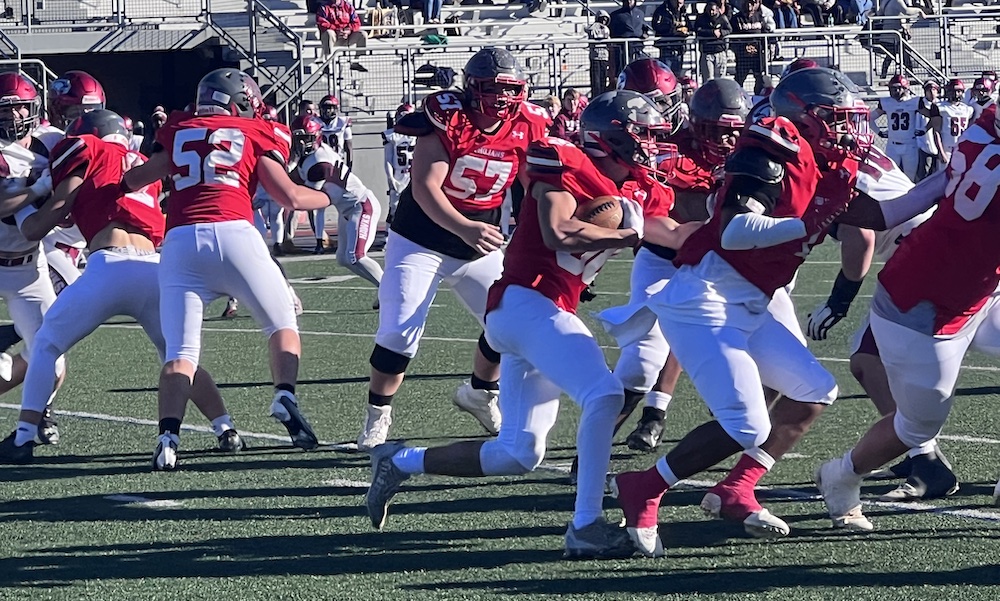 With the win, Prep faces Garnet Valley out of District 1, who defeated Central Bucks West 35-7.

The first quarter was back-and-forth on the first four drives. Prep’s running back Erik Sanchez scored on a 42-yard run followed by a Gryffin Mitstifer 39-yard field goal. It was 7-3 St. Joseph’s Prep with 7:37 left in the first quarter.

Jones answered on the next drive scoring from 12 yards out. The Trojans moved the ball again but settled for a field goal attempt. Mitstfifer hit a 41-yard field goal with 2:03 left in the first quarter and the score was 14-6 Prep.

“Defensively we let them move the ball down the field a lot in the first half,” said Head Football Coach Tim Roken. “We were able to hold them to field goals for a lot of those opportunities.”

On their third drive, Khaseem Phillips scored on an eight-yard run extending Prep’s lead to 21-6 with 58 seconds left in the first quarter.

“Khaseem has been carrying us most of the year and we have had some injuries at the position,” said Roken. “He works hard for these opportunities and made the most of them today.”

In the second quarter, Jones took over. He threw two touchdown passes. One pass was to Isaiah West for 23 yards and David Washington Jr. caught a seven-yard touchdown pass.

But it was Jones’ highlight reel run that stood out in the second quarter. He leaped over a defender and went 42 yards for the score. Just like that, it was 42-6 with 2:37 remaining in the first half.

Jones finished the night passing for 210 yards and rushing for 94. His offensive line gave him time to make plays.

“He has great command of the offense and today our offensive line played really well,” said Roken. “We were able to move the ball down the field offensively.”

Sanchez got his second rushing touchdown of the first half. He powered in from five yards out with 1:33 left.

They got it. Parkland’s Nakhi Bullock took the second-half kickoff and ran it back 95 yards for the touchdown. Jack Harrison caught a Luke Spang pass for the two-point conversion. Prep led 49-14 with 11:43 left in the third quarter.

“We didn’t start the second half off right and had to hit the reset button,” said Roken. “Doesn’t matter what’s on the scoreboard, we have to play to a standard.”

Prep scored on their next possession. This time, Ryan Miller’s 28-yard kick pushed Preps’ lead to 52-13.

With a running clock, the final score of the game came late in the third quarter. Parkland’s Harrison caught a 26-yard pass from Spang for the touchdown.