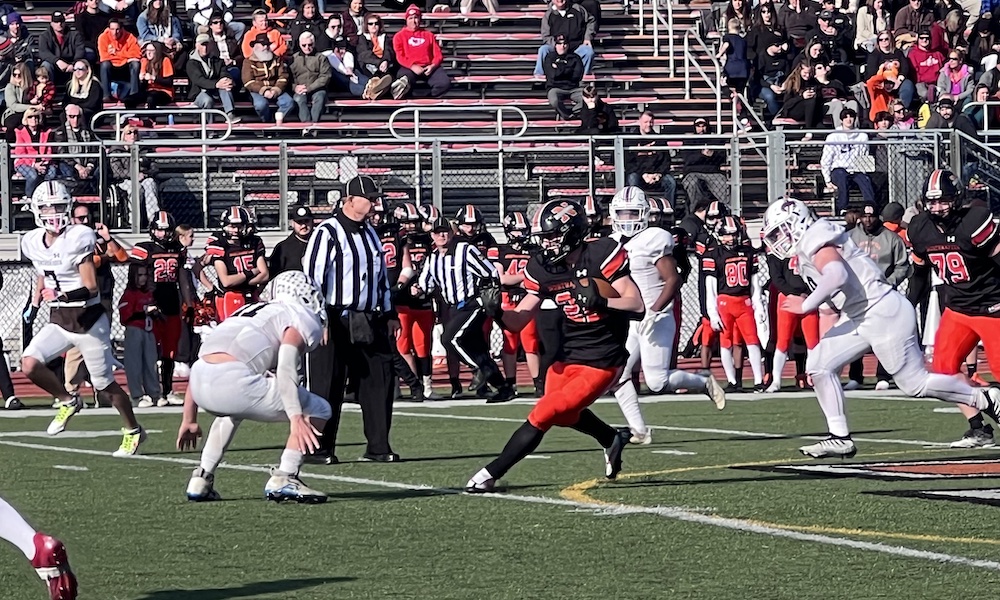 NORTHAMPTON – In the 99th meeting between Catasauqua and Northampton, it was Tristen Pinnock who accounted for five touchdowns to lead the Konkrete Kids over the Rough Riders 42-12 Thursday morning at Al Erdosy Stadium.

Northampton capped off a nine-play, 91-yard opening drive when Pinnock caught an Antonino Russo pass on fourth-and-goal on the four-yard line. Aaron Gutkowski’s kick was good and it was 7-0 Northampton. The big play of the drive was a Caden Henritzy 60-yard run to the two.

The Rough Riders moved the ball down to Northampton’s 27 late in the first quarter. But on fourth-and-five the K-Kids AJ Slivka timed his hit perfectly to jar the ball out of the hands of Wyatt Younes for an incomplete pass. Northampton took over on downs on the 26.

Northampton struck quickly. Pinnock got behind the defense and caught a Russo pass. He finished the drive by diving into the end zone for the 73-yard touchdown pass. The score was 14-0 K-Kids with 1:02 left in the first quarter.

“Offensively we came out real fast early in the game,” said Head Football Coach John Toman. “Defensively, they were moving the ball and grinding the clock but not putting points on us.”

Again, Catasauqua moved the ball down the field. The Rough Riders faced a fourth-and-one on the Northampton 20. Anthonie Hunsicker got the direct snap and dove for the first down with 7:35 left in the first half. Fye capped off the drive with a 35-yard field goal.

Northampton’s offense was on the move again. After a big kickoff return by Pinnock, he finished the drive with a two-yard touchdown run. The K-Kids led 21-3 with 5:03 left in the first half.

Catasauqua’s next drive ended on a spectacular one-handed interception by Slivka. But, the Rough Riders’ defense came up with a stop. A bad snap for Northampton on a punt attempt gave Catasauqua the ball on the three-yard line with 2:15 left in the first half.

The Rough Riders took advantage of the bad snap and cut into Northampton’s lead. Fye went in from one yard out. At halftime, the score was 21-10 Northampton.

Catasauqua started the second half with a trick play. Fye received the kickoff and threw a pass to the other sideline to Younes. He ran it 61 yards to Northampton’s 21. On fourth-and-five, Slivka intercepted the Fye pass ending the Rough Riders’ drive. He returned it to the 17.

The Rough Riders’ defense came up with a big stop. Jyzaiah Bonilla intercepted the pass and returned it 44 yards to the 18-yard line with 8:10 left in the third quarter. Catasauqua lost seven yards on a bad snap and missed a 41-yard field goal. It was still 21-10 Northampton.

The K-Kids started to extend their lead. Pinnock capped off a nine-play, 85-yard drive scoring from one yard out. They led 28-10 with 2:36 left in the third quarter.

Jaelen Richardson had a 60-yard punt return for a touchdown, which made the score 35-10.

On defense, Richardson intercepted a pass with 8:45 left in the game on their five-yard line. But the K-Kids had to punt. Northampton’s center snapped the ball over the punter’s head for a safety.

With 16 seconds left in the game, Russo hit Pinnock for a 14-yard touchdown pass. He finished the night with five touchdowns.

“We don’t call the plays specifically for Tristen, but today it worked out,” said Toman. “It’s the way things worked out for him today.”

Who else? Pinnock, who is only a junior, finished the game with an interception and a 42-12 win.

“That was the main priority coming into this game. It was to win this game for our seniors,” said Pinnock. “Today we did that for them and our fans.”