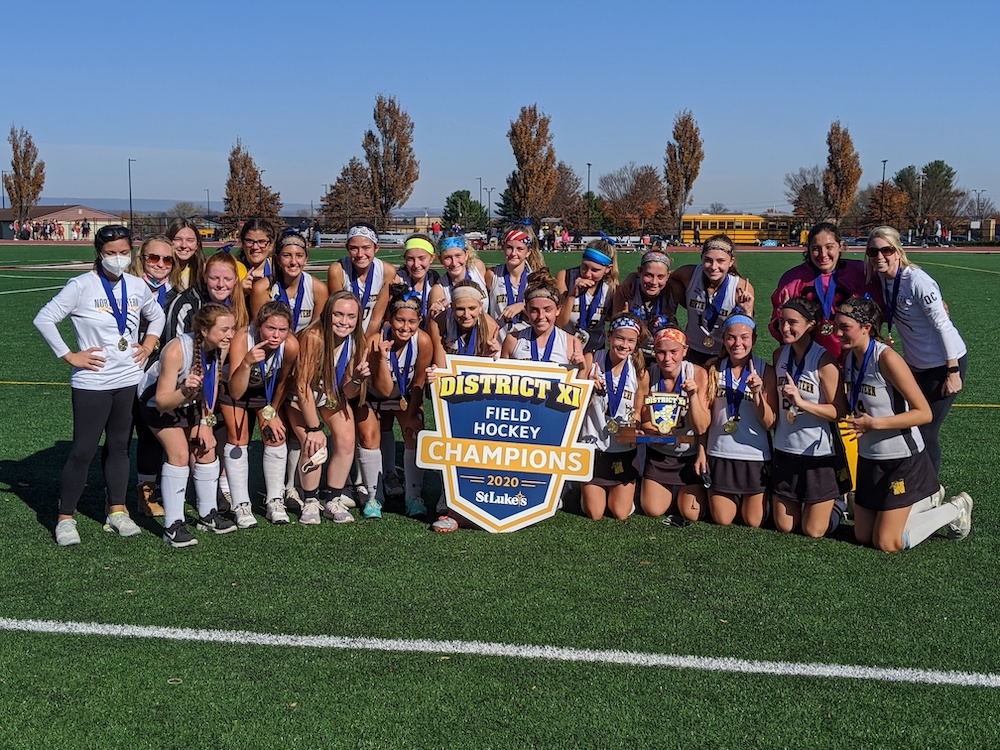 For two seasons in a row the Northwestern Lehigh and Moravian Academy have met in the District 11 championship game and for two seasons in a row, the game has gone to overtime. In each of those seasons, the final score has been 2-1 and the winner has been the same, too. The Lady Tigers repeated as district champions when Greenleigh McGehee scored a quick goal in overtime to start the celebration.

The two teams saw momentum swing back-and-forth throughout the game. Northwestern Lehigh generally controlled the play, but weren’t able to put together a sustained attack. Even so, the Lady Tigers did strike first when Brinley Rex made a nice move in front of the goal and slid a shot past goalkeeper Rosie John, putting Northwestern up 1-0 early in the second quarter.

“Throughout the game, Moravian did a really good job of playing to our weaknesses and their strengths. It made for a really good game,” said Northwestern coach Lissa Opolsky.

Coming out for the third quarter, Moravian Academy put on more of an offensive attack. Phoebe Shane threaded a pass to Nikki Chiaradia directly in front of the goal and got off a shot that barely evaded both goalie Maxine Hoffman and defender Karleigh Hobel. The ball rolled through the mouth of the cage and tied the game with 5:10 left to play in the third quarter.

The two teams took turns controlling the play through the final 15 minutes of regulation. Both had opportunities that they fell short on as defensive plays ruled the day. Moravian Academy kept pressure on Hoffman and the Tigers defense and were awarded eight corners in the second half, but were unable to convert on any of them.

“We really wanted to come out strong in overtime and get a quick goal,” said McGehee. “We wanted to go on the attack and try to end it quickly and not give them a chance to put together any momentum.”

Just over 30 seconds into overtime, McGehee passed to Tess Ledeboer, who didn’t have a great opening for a shot and fed the ball right back to McGehee, who fired a perfect shot past John for the game-winner.

“I saw the perfect opportunity to go into the stroke and Tess played a beautiful ball to me for me to tip in,” said McGehee of the play. “It just felt great, it’s crazy, obviously.”

As for Moravian Academy, coach Wendy Sheetz was proud of the way that her young team responded in a pressure situation. In the end though, the experience of Northwestern played a key role in the win. On the run-up to the goal, Moravian defenders thought the ball had been kicked and waited for a call. That brief freeze allowed Northwestern to seize an opening for the win.

“I have a really young team and high school hockey is much different than middle school hockey,” explained Sheetz. “They’ve got to learn that you can’t wait for a call. You have to play through to the whistle.”

Northwestern will now have a week off until they play the winner of District 4 in the quarterfinals of the state tournament. With various teams across the area having to drop out of district play because of the rise of coronavirus cases, there is some concern about whether states will be able to be played.

“We’re just going to take it one day at a time,” said Opolsky. “We don’t know what’s going to happen, so we’ll just keep preparing and be ready to play. It’s better to just keep our focus on what we can control and what we need to do.”