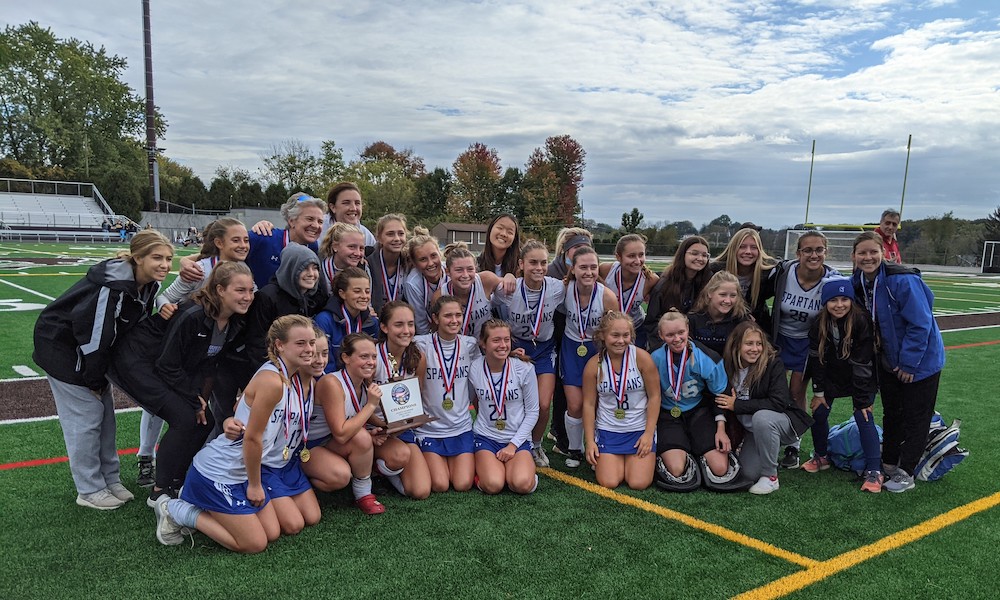 While Southern Lehigh is used to playing in Colonial League finals, Palmerton made just their second ever appearance in the league tournament and their first into the finals on Saturday. Experience helped the Lady Spartans to win their second league championship in the last three seasons as they downed the Blue Bombers 4-0.

The teams spent the first few minutes working the ball back-and-forth with Southern Lehigh having an advantage in controlling the play. It was midway through the first quarter when Southern Lehigh took a 1-0 lead when Brianna Stock poked a shot out of a gaggle of players in front of the Palmerton cage for the first score of the game. Ironically, Hughes had her only missed penalty shot of the season when the two teams met during the regular season, and she wasn’t about to miss this one.

In the second quarter, the big game experience of Southern Lehigh showed itself as they started to control the tempo. On a charge toward the goal, Palmerton was called for a foul in the box to give Southern Lehigh a penalty shot. Junior Lana Hughes took the shot and beat goalkeeper Shannon Dougherty with a shot to put Southern Lehigh up 2-0. Minutes later, Hughes would net her second goal of the game as the Spartans put themselves strongly in command of the game.

“One of my teammates made a reception in the circle and I knew I had to go for that tip,” said Hughes of her second goal. “I had to finish and get the shot off and that’s what I did.”

Hughes said the fact that the team lost in last year’s league championship game was a motivation to come in with more determination to get gold medals placed around their neck in this year’s championship. The loss in the finals came during what was a season off for veteran coach Adrienne Searfoss, who took a year off to attend to family issues after leading the team to the Colonial League title in 2019.

“We definitely knew coming into this that we wanted redemption. Even though we weren’t playing the same team, we wanted to work as hard as we could to accomplish our first step of our goals for this season,” noted Hughes of the team’s return to the finals.

As Palmerton looked to pull themselves back into the game, Southern Lehigh’s defense looked to maintain the shutout and were able to keep Bombers attackers from mounting any momentum. As an exclamation point, Southern Lehigh would cap the scoring with 4:33 left in the third quarter when Iris Gluck played a pass off a corner and put the ball into the back of the cage to make it a 4-0 game.

From there, the two teams continued to battle with Southern Lehigh continuing to frustrate the Palmerton offense.

“A lot of times we have put our heads down once a team would score on us, but I feel like our team did a really nice job of keeping their heads up,” said Palmerton coach Lauren Salerno. “I am so proud of the team, all of them. It’s amazing to get a medal around their neck and to even be here is awesome. Obviously, we wanted to win but I am very proud of them for all their efforts to get here.”

Both teams will have some time to prepare before they begin play for a district title. Southern Lehigh will open play in the District 11 2A tournament on November 2nd against Lehighton, while Palmerton will play the winner of the quarterfinal game between Wilson and Bethlehem Catholic in the 1A tournament. The Bombers first district game will come on November 3rd.